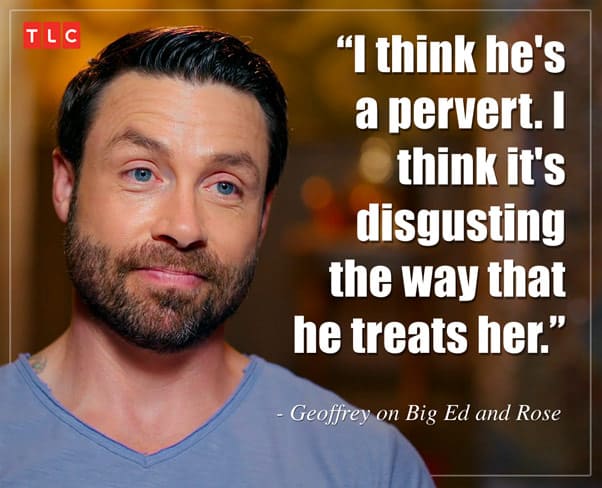 90 Day Fiance: Before the 90 Days star Geoffrey Paschel was not invited to participate in the Couples Tell All special due to his pending charges of kidnapping, domestic assault, and more. So, Geoffrey is taking things into his own hands by teasing his own Tell All video coming soon! In the video, Geoffrey will finally talk about his June, 2019 arrest as well as the allegations of abuse by his current and former wives.

In addition to his Tell All, Geoffrey also appeared on The Domenick Nati Show this week and talked about a wide range of topics, including TLC’s Tell All snub, his pending criminal case, his awkward on-screen love triangle, and his take on some of his Before the 90 Days co-stars. (Full video included below.)

Domenick brings up the pending criminal charges against Geoffrey stemming from an altercation with his girlfriend in June of 2019. [No, this girlfriend was not Varya, Mary, or Geoffrey’s estranged wife Brittany.] “Do you feel like you’re gonna beat these charges?” Domenick asks.

“I don’t feel like I’m going to, I know I’m going to,” Geoffrey responds confidently. “I know the truth…I know what happened. I was there. And I’m ready to face it.” Geoffrey says the constant delays due to the COIVD-19 pandemic have been frustrating because he wants to get “the quickest court date that I can and get this stuff over with.”

Geoffrey explains that when he was arrested in June he was initially facing just a misdemeanor charge of domestic assault, which explains why he was able to leave the country and fly to Russia to film. “They tried to drop the charges, but the ‘victim’ [Geoffrey uses air quotes] didn’t want to drop it and she pressed forward. And then they offered me no punishment whatsoever just to have it on my record. I said ‘No! Absolutely not!'” Geoffrey was told that if he didn’t take the offer that they would convene a grand jury and “trump up the charges,” as Geoffrey put it.

“‘You do whatever the hell you want to do, I am not accepting anything other than a full exoneration,'” Geoffrey says he told the prosecutor. “So that’s what they did.” If you’re curious, the amended charges that Geoffrey is currently facing are aggravated kidnapping, domestic assault, interference with emergency call, and vandalism.

Information is already leaking from the #90DayFiance #BeforeThe90Days #CouplesTellAll special filmed remotely over the weekend! Get the scoop on Geoffrey and Varya! https://t.co/YH7bIz2PQS

GEOFFREY NOT INVITED TO THE TELL ALL

Domenick smoothly transitions from the pending charges to asking Geoffrey whether or not the reports of TLC not wanting him to participate in the Couples Tell All were true.

“That’s correct,” Geoffrey asserts. “I feel that the network has bowed down to the pressure of a few thousand people as opposed to the 3.3 million people that watch the show, which is unfortunate.” I assume he is referencing the Change.org petition to have Geoffrey removed from TLC entirely, which has garnered more than 5,000 signatures.

“We’re in a different time now, you know? The whole #metoo movement and whatever, so there’s a lot of pressure to cower to the minority…wanting to make sure they’re not making the wrong decision. They didn’t want to get into all the legal stuff, so I didn’t give a lot of legal stuff to them.”

GEOFFREY TO RELEASE HIS OWN TELL ALL

Geoffrey then brings up his own Tell All that he plans to release on his YouTube channel soon. “I’m gonna let it all be known there.” He says the video will feature “several people” to “explain a lot of the situation that’s going on.”

Geoffrey talks with Domenick about the negativity he has received online this season. “It’s just sad that people resort to such negative and bullying type of
personality when it’s just unneeded,” he says after detailing some of the things he has had to deal with.

GEOFFREY ON BIG ED AND LISA

Domenick asks Geoffrey what his take is on the relationship between Big Ed and Rose. “I’m a blunt person, I like to put it bluntly. I think he’s a pervert. I think it’s disgusting the way that he treats her. I think that he’s manipulating her.”

Geoffrey acknowledges that cast members are edited to seem a certain way on the show, including Big Ed. “I’m sure he’s provoked or pushed to do certain things, but even if Varya was in a situation where I didn’t even like her — let’s say after the proposal when she said ‘not now’ — I’m not gonna go on there and say, ‘Hey your your breath stinks, and you need to brush your teeth more, and use some Listerine. Here, I brought you this.’ I’m not gonna do that…It’s common sense that you don’t do that to somebody…I think he lacked a little common sense in those scenes.”

What about Usman? “I don’t talk to him a lot,” Geoffrey says of Sojaboy. “I get little snippets, I see conversations and whatnot. But I question him, you know? I want to believe that he’s in it for love, but then you kind of weigh all the options — you really don’t know.”

Geoffrey reveals a little bit about what happened leading up to the dramatic surprise visit by Varya at Geoffrey’s house in Tennessee — while Mary was there!

Geoffrey says that it was roughly three months after he returned from Russia that he took Mary out for her birthday, and that was the dinner date that we saw on the show. He says that the surprise visit from Varya was the very next day and that “Mary was still at my house from the night before.”

“So you guys consummated the relationship?” Domenick asks.

“I didn’t say anything about consummation!” Geoffrey laughs. “She came over, she drank a little bit, so I didn’t let her drive kind of thing,” he says.

Geoffrey says that he was expecting producers to arrive to shoot some b-roll footage, but he insists that Varya being there was completely unexpected. “This was a complete surprise, 100 percent. I hear people say, ‘Oh, this is so staged! This is so fake!’ I was caught in the moment. You saw my sh*t-eating grin. And I was, like, ‘Mmmm.’ I didn’t know what to do! It felt like my heart went down to my toes.”

Here’s the full interview with Geoffrey Paschel on The Domenick Nati Show. It includes quite a bit I didn’t recap above, including Geoffrey’s take on David and Lana!