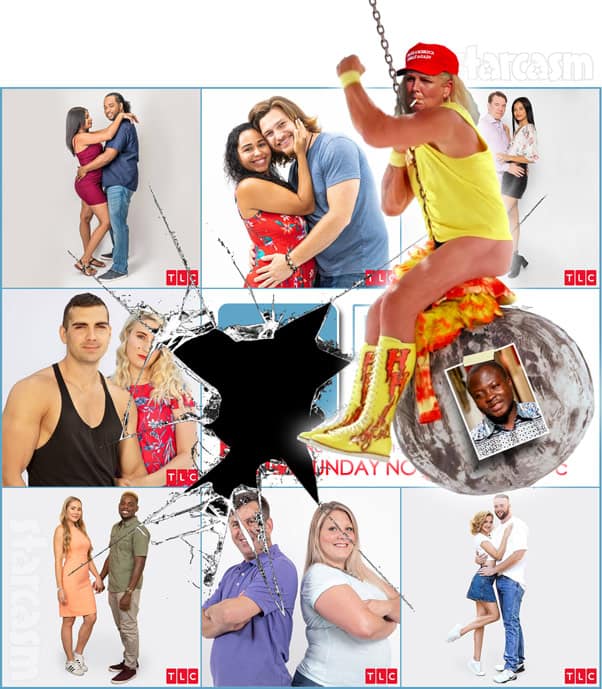 Angela Deem is fresh off of her Before the 90 Days “Couples Tell All” blow up and she will be right back on TLC this Sunday night as part of the new season of 90 Day Fiance!

The shocking reveal came via a brand new preview trailer just posted by TLC in which Angela can be seen getting Botox. “Michael will be here soon on the K-1 visa,” she says in the clip, “so I’m here to get me some Botox baby!”

In another scene, Michael can be seen crying during a Facetime conversation with Angela. “Michael, do you still want to get married or no?” Angela asks. The scene cuts to Angela saying “It’s painful.”

Here’s the full clip, which also features lots of previously unseen footage from the rest of the couples:

Time is running out and the pressure is on! These new couples have only 90 day to get married or pack their bags. Tune in to the season premiere of #90DayFiance Sunday at 8/7c. pic.twitter.com/Dcvtg1u73u

The addition of Angela to the 90 Day Fiance Season 7 cast explains a major controversy that has been playing out on Instagram this week. As crazy and over-the-top as Angela was during the Tell All, multiple cast members are saying it was actually much worse.

“Why didn’t they show the part where Angela and her daughter physically attacked my mom?” Avery posted in her Instagram story. She then shared a photo of a rather bad bruise on her foot. “This is also what they did to my foot when they were trying to jump my mom and I wasn’t letting anyone hit my mom. Muslim or not I stick up for myself and my family.”

Some fans questioned whether or not Avery’s claim was true because it wouldn’t make sense that TLC wouldn’t have included that dramatic moment on screen. However, Rebecca Parrott later replied and confirmed what Avery said and more:

I just want to say one thing about tonight. The entire altercation was not aired and Avery’s statements are absolutely true. Please do not glorify this person’s behavior.

The 90 Day Fiance franchise is nothing if not divisive, and despite Angela’s frightening outburst, there were numerous fans taking her side and arguing that it was Tim and Avery who started the whole mess by picking on Jesse. Rebecca responded by clarifying that TLC asks that the cast members engage with each other to stir up a little drama — especially since they feature backstage footage as part of the show.

That’s honestly not true. We’re literally TOLD to speak up to each other. Tim and Avery were doing exactly what they asked of us. And Angela went crazy. She physically attacked me by chest bumping me several times, she did hit Avery’s mom, and flipped the table out of the way in the process which hit Avery’s foot. Security is the one who separated Angela and the rest of us and made her leave. And we refused to film with her anymore. They filmed her segment separately, and possibly on another day, but I could be wrong about that part. Angela went from 0 to 160 immediately and it was uncalled for. Please don’t glorify what she did.

Given that 90 Day Fiance has featured numerous scenes with domestic violence, it might seem odd that they would edit out a physical altercation at the Tell All. However, Angela is kind of on thin ice already after her daughter Scottie was featured prominently on the show in Season 1 before being sentenced to three 20-year prison sentences for multiple counts of child molestation earlier this year.

Plus, if Angela really did assault Avery’s mom, I think a vast majority of the viewers would have condemned her — not something the network would want just days before announcing Angela is going to be on 90 Day Fiance.

So what do you think about the TLC groundhog seeing its shadow, signalling more months of Angela and Mykull? I am definitely Team Avery and Team Rebecca as far as the Tell All goes, but I don’t fault TLC for bringing her back. However, if they come up with some sort of BS that results in Michael never actually making it to the United States this season, then I will be among those hoisting torches and pitchforks! (I do want to thank TLC for giving me a reason to re-use our Angela Deem on a wrecking ball graphic.)

90 Day Fiance Season 7 premieres Sunday, November 3 at 8/7c on TLC. Click here to meet the entire cast (minus Angela) with photos, bios, and a few spoilers.

BEFORE THE 90 DAYS Jesse wants women to stop sending nudes, asks ‘why so nasty about Darcey?’