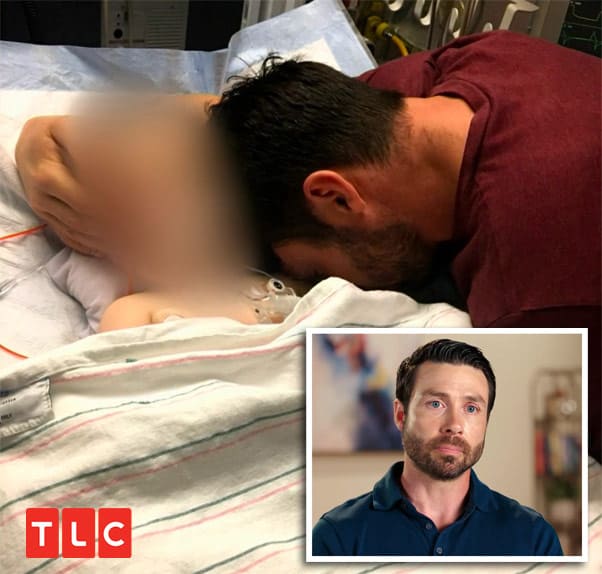 90 Day Fiance: Before the 90 Days star Geoffrey Paschel was not invited to participate in the Season 4 Couples Tell All special. It is believed that producers did not invite him due to his pending charges stemming from an altercation with his girlfriend in June of 2019, but TLC continued their silence in regards to Geoffrey and did not issue any sort of statement explaining why he was not invited.

As a result of not being able to participate in the Tell All, combined with the numerous stories about Geoffrey’s criminal past and allegations of abuse by his exes, he has recorded a series of videos explaining his side of the story and is potsing them on YouTube. In the first installment of the video series, Geoffrey shares information about his son Kazhem, who passed away in March of 2018 when he was just 13 months old.

Prior to Geoffrey’s video, there was very little information available about Kazhem’s passing. Essentially, all that was known was that Kazhem suffered seizures and was taken to the hospital. He would eventually pass away, and it was never clear what the cause of death was.

Geoffrey posted a video about Kazhem and dealing with the loss of a loved one back in January that was recorded at Kazhem’s grave. In our post about that video, we included a timeline of Kazhem’s hospitalization as well as some details from Geoffrey’s custody battle with his estranged wife (Kazhem’s mother) Brittany after the tragic event:

After his passing, Geoffrey and Brittany got into a legal battle over whether or not Kazhem would be cremated. According to the court documents, Brittany wanted cremation “so that both parents could have part of the child to have in their country.” Geoffrey would end up winning that legal battle and Kazhem’s body was laid to rest at the site shown in the YouTube video.

Here is Geoffrey’s video about Kazhem’s passing, followed by a recap:

Geoffrey reveals in the video that Kazhem had medical issues prior to his hospitalization in February of 2018. “In May of 2017, we actually went to a local theme park and his eyes started to cross,” Geoffrey says. “We thought it was cute,” he adds.

That sentiment turned to concern when Kazhem, who was between 2 and 3 months old at the time, was still having the issue later that night. He also began to have other issues, including when they attempted to put him to bed. “You couldn’t lie him down,” Geoffrey recalls. “You’d hold him up, and he was fine, but if you invert him, he just — his whole face would just turn red…like he was in writhing pain.”

They took Kazhem to the doctor the following day, and the doctor immediately called an ambulance.

Once at the Children’s Hospital, doctors were unable to diagnose what was causing the symptoms. Initially they thought it might be meningitis or Zika virus, and later they thought it might be due to some sort of brain issue. “They did CT scans on him. They checked him over 100% and never could figure out what’s wrong with him, and he kind of snapped out of it,” Geoffrey says.

In July of 2017, Geoffrey’s wife Brittany took Kazhem and his older brother Cayvan and ran off to her home country of Canada without Geoffrey’s knowledge or consent. There was an international court case that included allegations of abuse by Brittany. Eventually, the Canadian judge would determine that Tennessee was the habitual residence of the two children and that the issue of custody was not within the jurisdiction of Canadian court. In December, the two boys were returned to Tennessee where there was (and still is) a custody case pending in Circuit Court.

Geoffrey says that when Kazhem returned, he seemed completely fine. He also goes into detail about how he “would send emails and messages every day to their mother saying how wonderful they’re doing, how much fun they’re having.” He included screen captures of numerous emails that he says he sent to Brittany.

Brittany, who alleged in her court filing that Geoffrey “strangled, slammed and punched” her “several times, both alone and in front of the children,” did not respond to Geoffrey’s communications.

In February of 2017, Geoffrey says he was at work and Kazhem was at his girlfriend’s house when Kazhem started having seizures. She called 911 and they came and took Kazhem to the hospital. 2-3 days later it seemed as though Kazhem was “back to his normal self.” But, he began to experience another seizure while still at the hospital.

“When he had this second seizure, they ‘pumped him full of anything and everything’ they said,” Geoffrey recalls. “In fact, their words were: ‘We gave him so much stuff that he’s not gonna wake up for 24 hours at least.'” Kazhem didn’t wake up, so they moved him to critical care.

Geoffrey gets emotional when he recalls doctors checking Kazhem’s eyes and getting no response. “When it quits responding, that means almost certain brain death,” he says as he wipes away tears.

Geoffrey says that Brittany was there at this time. “Even with all this hate that went on between us, I fought for her to come down — everything from getting a lawyer on it to calling the Border Patrol. Everything to get her down because she needed to be with her baby.”

At this point in the video, there text is displayed as we hear Kazhem’s mother Brittany speaking to a doctor about Kazhem. Here is the text:

In the hospital, Geoffrey appealed to border patrol to allow the mother to re-enter the United States to be with Kazhem. When she arrived, she told doctors to check Kazhem for bruises and signs of abuse, accused Geoffrey of having opiates laying around the house, and told social workers he was violent.

She was told multiple times that they automatically check for abuse when children arrive in his condition. They had examined him and saw no signs of abuse.

Regardless, she insisted DCS open an investigation.

In the audio of Brittany’s conversation with a doctor, she asks if Kazhem’s medical issues could have been caused by “his environment.” The doctor says they looked into the possibility of ingestion and ruled that out. “Since he had been in here in May with what looked like an encephalitis, and he had kind of an abnormal MRI with that, we’re wondering if there’s a congenital picture here,” the doctor responds.

We then hear another conversation in which Brittany asks a woman: “Could some sort of trauma be the cause of all of this?” The woman explains that they saw no broken bones, brain injuries, or any other indication of trauma. Brittany asked about the possibility of Kazhem being shaken as a cause, and she is once again told that there is no evidence to support that diagnosis.

Geoffrey begins narrating again and reveals that Kazhem passed away in his arms at the hospital after they removed him from the ventilator.

Despite the allegations of abuse by Brittany and the mystery surrounding the cause of Kazhem’s death, the medical examiner did not want to conduct an autopsy.

“There was a chance for us to get an autopsy that wasn’t as in-depth,” Geoffrey says. “I allowed the mother to make the determination. I stayed back the whole time. I don’t care what — let’s get an autopsy! I want an autopsy! So I left the sole decision with her.”

Geoffrey says that Brittany did want an autopsy, but she wanted a private autopsy. It was a week to ten days later when the autopsy was done, and Geoffrey says that the amount of time meant there may have been things in Kazhem’s system that were no longer detectable. He then reveals that he thinks Kazhem’s death was caused by doctors giving him too much medication after his seizures in the hospital, but that is just speculation. “At this point, we have no idea why he died,” Geoffrey concludes.

The end of the video is this text detailing the aftermath of Kazhem’s death:

A legal battle ensued over final plans for Kazhem. The mother fought for cremation, even though that would mean any future “evidence” of her accusations of abuse would be forever lost.

Geoffrey eventually won and was able to bury him in Tennessee.

Brittany would later get primary custody of the couple’s other son Cayvan after Geoffrey’s arrest in June. The couple’s divorce and custody battle continues to play out in court.

VIDEOS Meet Before the 90 Days’ Larry and Jenny, his potential fiancée from the Philippines