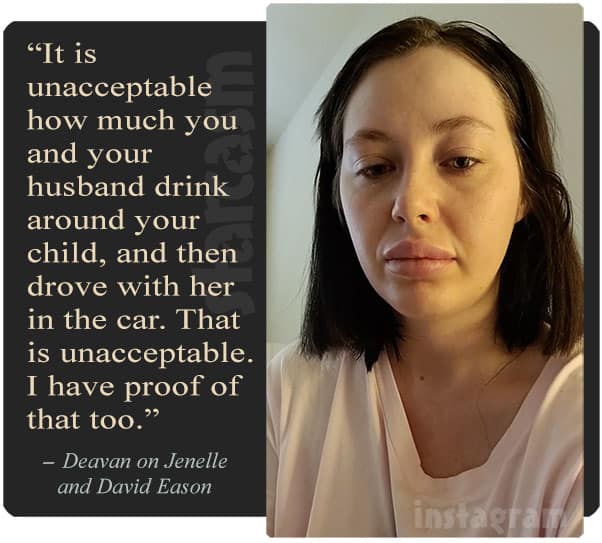 Jenelle Eason posted a lengthy video on Monday calling out her former Girl Sh*t podcast co-star Deavan Clegg for a variety of things, including suggesting that Deavan may have stolen her prescription drugs while they were in Chattanooga together in March. Deavan was made aware of the video, and she rolled right out of bed and onto Instagram live for a lengthy response video.

Deavan was clearly very frustrated as she called out Jenelle for defamation over the drug stealing allegation. Deavan also returned the favor by making numerous accusations against Jenelle — including the claim that she and David were “driving high and drunk” with their daughter Ensley in the car.

“I told the podcast people that we needed to do something about this and they wouldn’t do it,” Deavan claimed toward the end of the 14-minute clip. “They didn’t want to stand up for the child. They said, ‘You know, that’s just how it is over here.’ And that was the moment I quit.”

Although Jenelle did not mention the specific prescription drug that Deavan may have taken, Deavan concluded that it was Xanax Jenelle was referring to. That was a huge trigger for Deavan because she had an aunt that she was very close to who killed herself after taking too many Xanax. (This is a different aunt than the one that tried to kidnap Deavan and steal her car when she was pregnant with Drascilla.)

Deavan also pointed out that she was pregnant at the time of Jenelle’s drug disappearance, so it made no sense to assume that Deavan was the thief.

The video that Deavan was allegedly blackmailing fellow Girl Sh*tter Gabbie Egan with was also addressed in Deavan’s video. “I recorded her for my documentary,” Deavan said of the Gabbie video. “She said she was drunk and I took advantage of her. I didn’t. She was dead ass sober. It was morning and she just said that because she’s scared because the whole entire time for my documentary she was talking sh*t about Jenelle.”

Deavan said more than once that she is definitely going to sue Jenelle. “Jenelle, I am taking you to court,” Devana stated. “I am suing you now. This is unacceptable. I promised my love I wouldn’t get into a lawsuit — I didn’t want to go through that pain, but accusing me of stealing your drugs is illegal.”

During the video, Deavan was getting numerous comments about her rather plump lips, and she responded. “Please stop talking about my lips guys. I know. I like ’em. Please stop.”

There’s a lot more to unpack from the video, and unfortunately Deavan has since deleted it from Instagram. So, here is a nearly complete transcript with some of the less important and/or redundant content edited out. (Including Deavan saying “unacceptable” dozens of times.)

#TeenMom2 #90DayFiance Jenelle Evans & Deavan Clegg team up with other female influencers for a new project called #GirlShit. Find out more about the project & meet the other women showing support for Jenelle & Deavan by working with them! #TheOtherWay https://t.co/9XP4NEpTvX pic.twitter.com/8MK0KYzhtv

[Jenelle] was fired from this podcast. I have the proof…She keeps lying. So does Gabbie. You both are liars. I have the evidence. I have the receipts and proof.

I’m going to say something, and I’m going to apologize to Chris because he doesn’t like me talking about this. I love you honey and I apologize. [Jenelle] is accusing me of doing Xanax. And stealing her Xanax. That is a crime Jenelle! You cannot accuse someone of that!

Everyone who is my fan knows that Xanax is what took my aunt’s life. She was hooked on Xanax. She was my best friend. (We’re the same age.) And she overtook it, and she became addicted to it, which led to her death — ultimately making her commit suicide a day she took a lot of it. So everyone knows I do not like Xanax. Obviously, if you’re prescribed it, take, you know, how your doctor tells you to. Don’t overtake it.

…I was pregnant! Why on Earth would I be stealing your medicine? You accused me of that. That is illegal. Everything you are saying is a lie.

…You have a huge platform. You need to stop.

…Jenelle, should we talk about how you and your husband had open containers in the car with your young child and I had to drive because I was so upset that you guys were even going to drive? And so was Gabbie. Gabbie’s the one who brought it up to everyone, that you had open containers and were drinking and driving with your child. So don’t even!

And I was very upset about that, and it killed me inside. So, do not sit here and say I stole your medicine and that I do drugs. That is unacceptable. That is not OK.

I need to address this now because this group of people have been bullying me for a year. A year! When she was fired, she called me when I was at the airport, on her husband’s phone, and told me she was going to team up with these people and threaten me! And guess what she’s doing? She teamed up with these people. Now she’s suing John for BS stuff.

I never talked about the podcast. I didn’t do, like, it’s been months I didn’t talk about it. But you and Gabbie would not stop, so I made a statement. And I was polite enough to change names. I was real nice. I didn’t say your real name, I didn’t say her real name. I didn’t say half the stuff that I wanted to say. I was very polite, and you guys have lied about me time and time again.

Now, accusing someone of stealing drugs is a HUUUGE no no. A huge no no, and it’s not OK. You need to stop.

I did not want to get a lawsuit because — the reason why I did not sue you Jenelle is because I didn’t want to have to deal with it because I’ve been dealing with a lawsuit all year, and it’s exhausting. But now we’re done.

I am suing, and I’m done. And I have all the proof and receipts. Stop lying about me. Accusing somebody of stealing drugs is not OK. I was fine with you running your mouth and saying lies because no one believes you. They saw my receipts. Everyone saw the truth that you were fired and all this stuff.

#TeenMom2 Jenelle Evans was reportedly fired from her Girl S#!t podcast one day after the announcement, but she & husband David tried to crash the launch party anyway. Was her firing because of #90DayFiance star and fellow Girl S#!tter Deavan Clegg? https://t.co/NTcFzLNvBw pic.twitter.com/C8EjQZ44VG

…I was trying to be the adult and not go live, not cause all these things. I didn’t talk about the podcast. I finally did make a thing because they wouldn’t stop talking about it, and they have huge platforms. It is slander, it is defamation, and if I were to take it to court I would win.

…I was not fired by [90 Day Fiance production company] Sharp Entertainment. I still have my contract guys. I say it all the time, I wish they would fire me! I wish! Then I would feel so free!

…Jenelle, I am taking you to court. I am suing you now. This is unacceptable. I promised my love I wouldn’t get into a lawsuit — I didn’t want to go through that pain, but accusing me of stealing your drugs is illegal. I will report it to the police. And as for the owner of the podcast…I hope you’re proud of yourself. I hope you’re proud of yourself because you said you were going to fix this. You said you were going to send out the [cease and desist letters]. You didn’t. You didn’t protect us. And honestly, oooo — what a mistake. What a mistake.

I never talked about the podcast guys. I waited until the last minute, and when I did, I changed names. And I was being polite.

…And I didn’t know about Jenelle’s past. I’m sick of people saying I did. No, I didn’t f***ing know. She told me that same night and I was, like, “Oh! Oh. Oh.” And I will show all our DMs. I’ll show the proof. She scammed me out of money before. She scammed me out of money on this. Unacceptable. You do not accuse someone of stealing your medicine.

…I didn’t watch her whole video because I just got so mad about the medicine thing.

…Court will solve it Jenelle. You are a liar. You are committing defamation. This is unacceptable. I know you’re in some fake f***ing lawsuit — sorry I cursed, I didn’t mean to curse — you’re in some fake lawsuit, but I can assure you sweetheart this will be a real one. And you CAN NOT USE JOE for it. I am done! And just so you guys know, Joe is the same as Jihaha’s lawyer who did Jihaha. [I am guessing that Deavan is not allowed to mention Jihoon’s name due to their legal issues.]

…I don’t care where people say Gabbie didn’t do anything. She did! She lied. I have proof. I recorded her for my documentary. She said she was drunk and I took advantage of her. I didn’t. She was dead ass sober. It was morning and she just said that because she’s scared because the whole entire time for my documentary she was talking sh*t about Jenelle.

So I’m done! I will see all of you in court. I am done! Play big kid games, I will play them back.

…If you don’t know, you guys now know I’ve been stalked and harassed for over a year now. We had to move. These people live really close to me. It was very scary the past year what these people were doing, OK? And Jenelle knew that. She knew about these people, and then she decides to call me and tells me at the airport, “I’m going to team up with them and ruin you.” Guess what? Now she’s on a f***ing lawsuit suing John Yates with these people.

You need to — first off, you need to stop drinking. It is unacceptable how much you and your husband drink around your child, and then drove with her in the car. That is unacceptable. I have proof of that too. So don’t come here and say you didn’t do that. so don’t say you’re gonna sue me and I’m gonna lose because you didn’t drink and drive. You did. Both of you did. It was unacceptable. I was very uncomfortable with it.

#TeenMom2 Jenelle Eason shares her side of what happened during the Girl S#!t podcast implosion as part of her ongoing feud with #90DayFiance's Deavan Clegg. Get a full recap, including contract excerpts and text message receipts! https://t.co/zH9me0voFC pic.twitter.com/xS13dgAKmv

I wanted to call the police. I did. I told the podcast people that we needed to do something about this and they wouldn’t do it. They didn’t want to stand up for the child. They said, “You know, that’s just how it is over here.” And that was the moment I quit. I told them I didn’t want to be a part of it any more. If this is the image, I don’t want to do it. I quit first, said I wasn’t going to do it, and then they asked me, “If we — it’ll be fine. We already wanted to fire Jenelle.” So they fired Jenelle and said, “Can you at least come to the party?” I had already quit! I was done!

UPDATE – Deavan’s video has since been uploaded to YouTube: