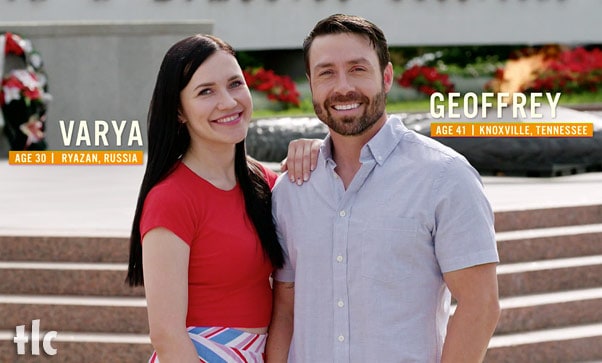 TLC surprised a lot of people when they elected to leave 90 Day Fiance: Before the 90 Days couple Geoffrey Paschel and Varya Malina on the new season after it was revealed before the premiere that Geoffrey is currently facing domestic assault and kidnapping charges in Tennessee after an incident with his girlfriend in June of 2019.

The network has yet to officially respond to the charges against Geoffrey, or their decision to leave him on the show. However, they did elect to leave Geoffrey and Varya’s scenes out of their popular commentary series Pillow Talk. Now, it is being reported by a reliable source that Geoffrey was not invited to — and was not present at — the 90 Day Fiance: Before the 90 Days Couples Tell All filmed remotely over this past weekend!

The tea comes from 90 Day Fiance Tell All scoopologist Katrina with The Fraudcast podcast. “Geoffrey and Varya were NOT part of the Tell All filmed this past weekend,” Katrina shared on Monday. She teased that there will be more Tell All news included in the new episode of The Fraudcast, which is scheduled to be released later tonight. (We’re also told that there may be some information about whether or not Varya accepted Geoffrey’s proposal!)

UPDATE – We now have ALL THE TELL ALL TEA from the most recent episode of The Fraudcast! Click the link for all the spoilers! As far as scoop about Geoffrey popping the question, Varya reportedly turns down Geoffrey’s proposal!

TLC reportedly told Geoffrey that he would not be invited to appear on the Tell All, but they did extend an invitation to Varya. Varya has been very supportive of Geoffrey this season, and she reportedly told TLC that if Geoffrey wasn’t allowed to participate, then she didn’t want to either.

Geoffrey hinted that his relationship with the network was not a good one during a recent Instagram live session with Trisha Paytas in which he stated that he and TLC had parted ways.

Another hint came from TLC, who shared a social media poll gauging fans’ excitement for couples appearing on the Tell All that did not include Geoffrey and Varya.

As we have been doing with all of our posts about Geoffrey Paschel this season, I will conclude with links and descriptions from our previous articles. Before I get to that, I did want to clarify some things that I see numerous folks wondering about online.

No, the girlfriend that Geoffrey allegedly assaulted in Tennessee in June of 2019 WAS NOT Varya. She was a young woman from Tennessee that Geoffrey had been dating for quite a while.

We've got more info about controversial #90DayFiance #BeforeThe90Days Season 4 star Geoffrey Paschel, including allegations of abuse from his estranged wife, who ran off to Canada with their 2 children in July, 2017. And yes, they're still legally married. https://t.co/ycquo7wYBl

It appears that Geoffrey was filmed after his arrest in June, which has tons of people asking how he was able to leave the country with pending felony charges. Geoffrey was initially charged with misdemeanor domestic battery, and it appears that the other charges were not added until December, which was after he filmed for 90 Day Fiance: Before the 90 Days. Leaving the country with a pending misdemeanor is not nearly as big of a deal, so it would make sense that he was able to fly to Russia.

For a full recap of our coverage, I recommend you see our summary article here. It includes some of Geoffrey’s posts this season about the backlash over his appearance on the show after his June arrest and the numerous allegations made against him by his current and former wives.

A complete list of our articles about Geoffrey with titles, links, and a brief synopsis of each. The articles are from oldest to newest, with the latest update on his pending case at the bottom: