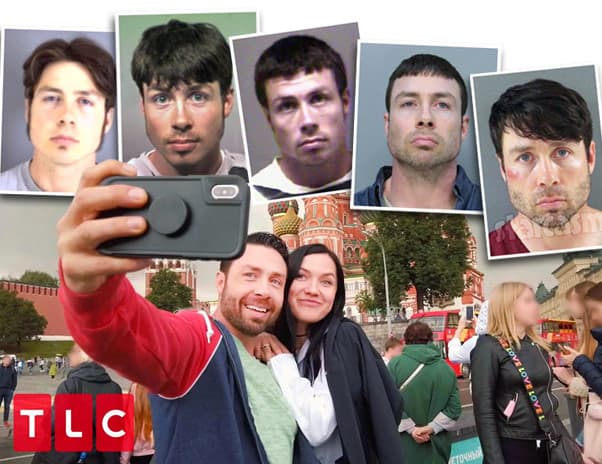 As we were the first to report, Before the 90 Days Season 4 star Geoffrey Paschel is currently facing charges of aggravated kidnapping, domestic assault, interference with an emergency call, and vandalism after allegedly assaulting his live-in girlfriend in June. She filed for an Order of Protection the following day alleging that Geoffrey “repeatedly bashed/slammed my head into the hardwood floors of my home” and “he dragged me through the house by my hair and continued throwing my body into walls and furniture.”

We have since obtained a copy of the police report from the incident, which reveals some additional details about the aftermath of the alleged assault — including police having to apply additional restraints to Geoffrey twice after he was handcuffed and placed in a police vehicle.

Geoffrey’s girlfriend told police that he “was in an intoxicated state and assaulted her.” Iterating what she would later state in her Order of Protection filing, she said “Geoffrey grabbed her by the neck and slammed her head against wall several times. [She] also stated she was thrown to the ground during the assault.”

Seemingly supporting her account, “officers observed a large raised bruise on [her] forehead and abrasions on her elbows and knees.” A paramedic on the scene “stated the victim displayed common signs of a concussion. A forensic unit responded and documented the victim’s injuries.”

When officers spoke with Geoffrey, he told them that his girlfriend’s injuries were self-inflicted. And speaking of self-inflicted injuries, the arrest report reveals that “Geoffrey had scratch marks on his stomach and chest which appeared to be self-inflicted.”

Officers determined that there was probable cause to charge Geoffrey with misdemeanor domestic assault. He was handcuffed and placed in a police vehicle. After that, Geoffrey managed to make his bad situation worse.

From the arrest report:

At the time of his arrest, Geoffrey had custody of his and Brittany’s four-year-old son Cayvan. The co-parenting arrangement determined that Brittany, who now lives in Canada and can no longer enter the United States legally, had Cayvan one week a month. Cayvan was with Brittany at the time of Geoffrey’s arrest, and there was a hearing scheduled for June 11 “in part to determine future co-parenting time.”

Geoffrey was a no-show for the hearing, and it was after the hearing that Brittany found out about the assault arrest. She and her lawyer immediately filed for an emergency motion to suspend co-parenting time based on the arrest and the “particularly egregious” allegations against Geoffrey.

A judge sided with Brittany and gave her temporary physical and legal custody of Cayvan. The co-parenting schedule was flipped, with Geoffrey now being able to have his son one week a month. Geoffrey has been posting lots of photos and videos of Cayvan on Instagram this week, and that’s because he has him from December 28 through January 5. On January 5 he will return to Canada to be with his mother. (Due to Brittany not being able to enter the US, her mother flies into Atlanta to pick Cayvan up.)

We've got more info about controversial #90DayFiance #BeforeThe90Days Season 4 star Geoffrey Paschel, including allegations of abuse from his estranged wife, who ran off to Canada with their 2 children in July, 2017. And yes, they're still legally married. https://t.co/ycquo7wYBl

If you’re curious as to how Brittany lost custody of her son, that is because she took him (and his younger brother) to Canada without permission back in July of 2017. She claimed that she feared for her safety and the safety of her children in part because Geoffrey had a history of physical and emotional abuse. However, a judge ruled against her and insisted that the children be returned to Geoffrey in Tennessee until the custody battle was heard in court there.

The younger son passed away in March of 2018. (I know there are a lot of questions about his passing, and we are working diligently to find out as much about what happened as possible.)

Here is the response from the judge:

The Mother previously posted a $25,000 cash bond with the Clerk of Court to secure her performance with the Court’s Orders and the Court hereby Orders that the Clerk shall return the sum of $5,000 to the Mother upon the entry of this Order with the remaining $20,000 to remain on deposit with the Clerk as bond subject to the Court’s previous Orders.

Brittany and Geoffrey are scheduled for another custody hearing in March.

If TLC opts to keep Geoffrey on the show, you can follow along as he courts his Russian girlfriend Varya when 90 Day Fiance: Before the 90 Days Season 4 premieres Sunday, February 23 at 8/7c.

NOTE: In our previous post about Brittany we stated that she has both Canadian and Jamaican citizenship in addition to revealing her allegations of abuse against Geoffrey. Another media outlet picked up the story and stated two things as fact that we did not state in our post. Number one, that Brittany is black. Number two, that Geoffrey was arrested for assaulting Brittany. Number one is simply not true. In regards to the second assumption, Brittany does accuse Geoffrey of abuse in court documents, but I have yet to confirm that Geoffrey was ever arrested for assaulting her.

BEFORE THE 90 DAYS SPOILERS Are Rachel and Jon still together?