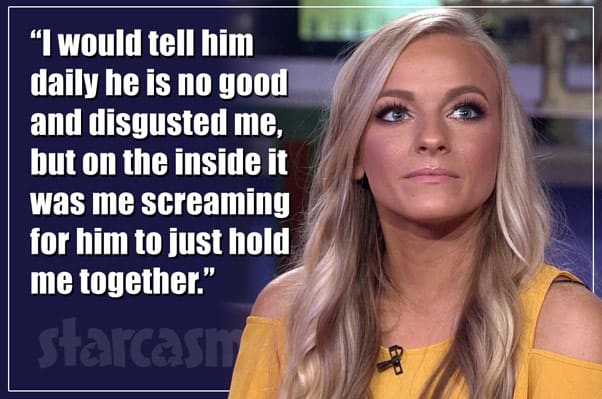 Teen Mom OG star Mackenzie McKee shocked her followers this week when she announced that her and husband Josh McKee had split after Mackenzie discovered he had been having an “affair” with her cousin Ashley that began one week after Mackenzie’s mother Angie passed away. In a new interview, Mackenzie clarifies what happened, including her admission to treating Josh horribly and that he had an “emotional affair” with her cousin that may have included talking about haircuts and trying to get anxiety medication.

Mackenzie’s interview was with Champion Daily, who often partners with celebrities for sponsored links. “I will admit to calling him mean names everyday and pushing him away,” Mackenzie says of the time after Josh’s re-proposal. “Then, after I lost my mom, I also lost all sanity,” she continues. “I would tell him daily he is no good and disgusted me, but on the inside it was me screaming for him to just hold me together.”

Mackenzie reveals more about how her and Josh’s relationship deteriorated after her mother passed away in December. “Life after my moms death has been misery. I haven’t been the same. I probably am not easy to deal with. So Josh started doing what he does best and run from the situation.” Mackenzie says that Josh began to work longer hours, and I assume that this is when he began his frequent “fishing” trips that Mackenzie mentioned in her initial Facebook post.

“Two times this year I have kicked him out of the house just to try to find my sanity,” Mackenzie says. “Was it wrong? Sure, I’ll admit that. But lately our relationship has literally been sleeping under the same roof and loving our kids. He says to me all the time ‘I’m just here until you find someone and I will leave,’ so we both know it was coming to an end, but being together for 11 years it was just so hard.”

Mackenzie also says that Josh was tired of their personal lives being in the spotlight and he wanted out. Mackenzie didn’t see that as a viable option. “I run my entire life/income on social media sharing anything and everything,” she explains.

“If you ask him, he says I pushed him away,” Mackenzie adds. “And my side of this all is I never felt valued or loved. Out of everything I have accomplished he was never proud of me.”

Mackenzie then shares more info about the relationship between Josh and her cousin Ashley, which she initially described as “obviously another affair” in her Facebook post. Mackenzie says that Ashley is “far older” than her and Josh. “She cuts hair for a living and has cut Josh’s hair along with all my family’s for years,” Mackenzie says, adding that her and Josh “used to hang out with her and her ex now husband and let each others kids stay over.”

Here’s a Facebook gallery posted by Mackenzie’s mom Angie Douthit in August of last year which she mentions “my favorite hairdresser (my niece Ashley):”

Given that Josh seems like a man of very few words, many people were questioning what he and Ashley were talking about during their numerous text and phone conversations. “Josh and Ashley both say that a lot of them were chatting about a hair cut, and she was going through Josh to get some anxiety meds from his brother, and that Josh would come to her to talk about our problems and ask her advice,” Mackenzie says.

Josh told Mackenzie that Ashley was always encouraging him to “man up” and be there for Mackenzie, but Mackenzie seems a bit suspicious. When asked what she thought really went on between Josh and Ashley, Mackenzie says “Idk…… But I’m tired of laying in bed and wondering. I shouldn’t even have to wonder or worry. I feel betrayed by my own family and things will never be the same.”

What about Mackenzie stating that Josh and Ashley had an “affair” in her Facebook post? “To me, if a man came to me, it is not my place to speak to him. It’s inappropriate and in my eyes this is an emotional affair,” Mackenzie says. “Josh’s job was to hold me together and selfishly he was thinking about himself. He could have handled my behavior in a whole new way. Go to a preacher, a therapist. But NOT my cousin.”

What’s next for Mackenzie after her split from Josh? “I am excited for my future,” Mackenzie says. “I have a good career, and although I don’t have my family put together, I truly believe God is going to heal me and let me see why this is happening.” She says that she is praying for Josh and that she hopes he “finds someone who will be nice to me and good for him and to my kids.”

“God is writing my story,” Mackenzie says, “although it isn’t exactly what I had wanted.”

#TeenMom3 Mackenzie McKee and husband Josh feud on social media over allegations that she cheated on him: https://t.co/1ORNxtu4Yf