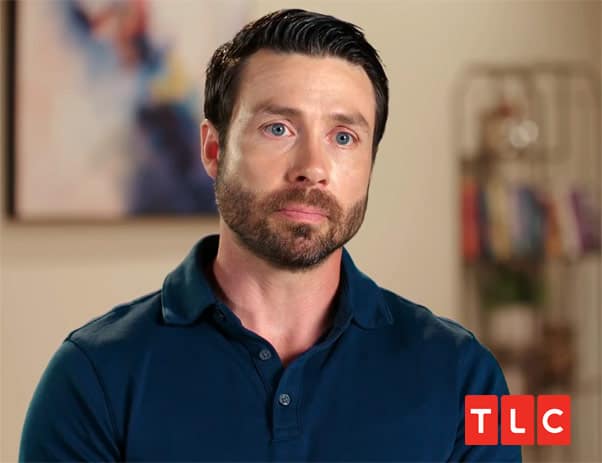 When 90 Day Fiance: Before the 90 Days returns for a fourth season on February 23, one of the most talked about cast members will undoubtedly be 41-year-old Geoffrey Paschel from Knoxville, Tennessee. Geoffrey is already making numerous headlines weeks before the premiere because of his extensive history of abuse allegations from numerous women, including his current wife, at least two of his ex-wives, and his girlfriend from last year. (Geoffrey is currently facing multiple charges including domestic assault and kidnapping after an incident with his live-in girlfriend in June of 2019.)

In addition to the abuse allegations, Geoffrey also has a heart-breaking family tragedy: his 13-month-old son Kazhem passed away in March of 2018.

“The last few years have been rough for Geoffrey,” the official TLC bio reads. “Shortly after his second marriage ended in divorce, he suffered the tragic loss of his son. But life started to look up when he met Varya on an international dating site. Despite their cultural differences, they quickly bonded over their shared love of adventure. Now, Geoffrey has a trip to Russia on the horizon and is considering proposing to Varya, but he must first prove to her family and friends that he’s the right man for her.”

[I want to clarify that the bio is wrong and Geoffrey is actually still legally married to Kazhem’s mother. Also, it appears that Kazhem’s mother is Geoffrey’s fourth wife, not his second.]

Last week, Geoffrey shared a video on YouTube that he recorded at his son Kazhem’s grave. The video is titled “How to Manage The Loss Of A Child,” and it includes Geoffrey’s thoughts on his son’s passing and coping with the grief. (Unfortunately for Geoffrey, there was a stray dog at the grave site that nipped and wrestled with him throughout the 10-minute clip.)

“Hi. My name is Geoffrey Paschel and I’m here to talk with you about how to get over a loved one — specifically a child when he or she dies,” Geoffrey begins the clip while trying to keep the playful stray dog at bay. “The easy answer is: you don’t — you never do,” he continues. “It’s the hardest thing I’ve ever had to deal with in my life, and you’re never ready for it.”

“It wasn’t like he was a sick child,” Geoffrey reveals. “Nothing was coming on. No warning. And you’re not prepared for that.”

Geoffrey says he wanted to die at first. “It was just horrible. You know, all the bad stuff that people are saying about me out there, I would never wish something like this on them. Ever. I mean, it’s the worst thing in the world. The worst feeling. The worst experience.”

Later in the video, Geoffrey brought up the current issues he is having with his estranged wife, who is the mother of Kazhem as well as his older brother Cayvan:

He was loved. All the issues and the problems that I’m going through right now…with his mother, I know one thing about the child was that he was loved no matter what.

Even though there’s a lot of animosity, or resentment, or jealousy, or whatever’s going on, I feel for her. I still feel for her. She birthed him, and I was there to cradle him as he came into this world. But, you know, she carried him for nine months.

Geoffrey returns to reflecting on the impact that Kazhem’s passing had on him towards the end of the video. “I learned a lot. I’ve gained a lot of patience, a lot of, I guess, wisdom from this – -and a lot of feelings that I didn’t have at first. You know, some empathy per se. I didn’t really empathize well with people, and that’s something that I’ve been learning to do because of this situation.”

“Nobody knows what I’m going through, you know? I’m not a person to ever talk about it. So, for me to get on this right now and talk about it, you know it’s weighing on me heavy.”

Geoffrey then thanks everyone for watching and encourages anyone with questions to ask him.

I’m guessing that the most common question Geoffrey will receive from the video will be people asking for more information on how Kazhem died. All that Geoffrey says is that it was unexpected and Kazhem wasn’t suffering from any sort of known illness prior to his passing.

I cannot answer that question, but I can share all of the information I have been able to find out from court documents.

As you can tell from the tombstone in the video, Kazhem was born on February 3, 2017. Dad Geoffrey and mom Brittany Paschel enjoyed traveling, and “in order to give the children greater citizenship and immigration options,” their two kids were both born in different countries. Kazhem was born in Nicaragua and Cayvan was born in Costa Rica. Thanks to his mother having both Canadian and Jamaican citizenship, Kazhem had citizenship in both of those countries as well as Nicaragua and the United States.

Amid allegations of abuse and concern for the well being of her children, Brittany took sons Cayvan and Kazhem and fled back to her home country of Canada in July of 2017. She had been in the United States illegally, so once she entered Canada, she was barred from returning to the US. After a heated international court battle, a Canadian judge ordered that the two boys be returned to Geoffrey in Tennessee to let the custody battle for them play out in Tennessee court. That was in December of 2017.

I’m not much on prayers (or expressing myself on FB), frankly I believe there were many times in my life whereas “he” should have stepped in and guided me a certain way if there was, in fact, a “he”. But right now, I don’t care, just do whatever you believe works for the world and bring this little boy back to health. He’s an awesome kid and doesn’t deserve this.

If there is a “he”, why would you allow this? What has this precious little boy done? All he is, is an amazing ray of light and one can’t help to gravitate towards him. So please, gravitate some positivity-not towards me, I don’t need anything, just to him…all of it and please, don’t stop.

Kazhem was pronounced brain dead on March 6, and he was taken off of life support the following day.

After his passing, Geoffrey and Brittany got into a legal battle over whether or not Kazhem would be cremated. According to the court documents, Brittany wanted cremation “so that both parents could have part of the child to have in their country.” Geoffrey would end up winning that legal battle and Kazhem’s body was laid to rest at the site shown in the YouTube video.

After Geoffrey’s arrest in June, Brittany received temporary primary custody of their son Cayvan and he now spends most of his time with his mother in Canada.

If TLC elects to leave Geoffrey on the show, you can follow along with his dating adventure in Russia when 90 Day Fiance: Before the 90 Days Season 4 premieres Sunday, February 23 at 8/7c on TLC.

If you’re looking to find out more about Geoffrey before the Season 4 Premiere, here is a list of all of our posts so far from “The Geoffrey Paschel Files,” which we will continue to update and include at the end of each of the articles: