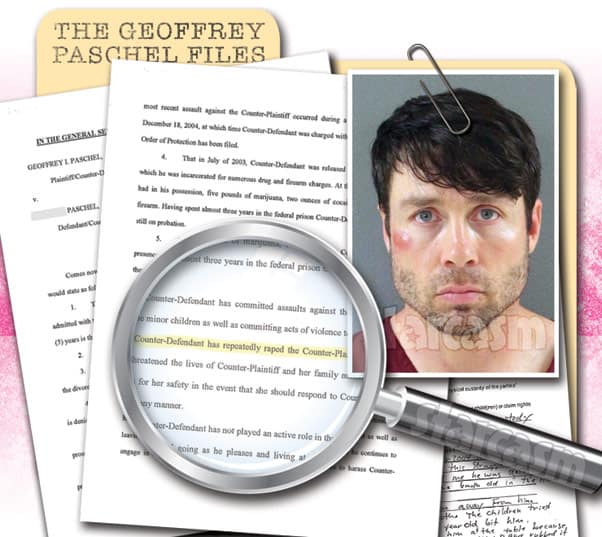 We continue to look into the background of controversial 90 Day Fiance: Before the 90 Days Season 4 star Geoffrey Paschel, which includes multiple allegations of abuse by his current estranged wife, his girlfriend up until his domestic assault arrest in June of 2019, and at least two of his ex-wives.

Based on our research, it appears that Geoffrey has been married four times, including his most recent marriage to Brittany Paschel. (Their divorce case is still pending.) Geoffrey has fathered at least five children with his wives, as well as children from women he was not married to.

This post is in reference to Geoffrey’s second wife, who we will call Stephanie. (If she decides to open up publicly about her relationship with Geoffrey, then I will update the post with her real name.)

Geoffrey and Stephanie have two children together: sons born in January of 1999 and November of 2000. The couple was married in April of 1998, and Geoffrey filed for divorce in November of 2004 — so they were married roughly six-and-a-half years before the separation.

As mentioned, Geoffrey was the one who initially filed for divorce. His filing claimed that the two of them suffered from “irreconcilable differences” and that Stephanie was “guilty of inappropriate marital conduct.” In his filing, Geoffrey cites a specific incident that resulted in Stephanie being arrested and charged with child abuse and neglect as well as drug possession.

In October of 2004, Stephanie left their five-year-old son in her car while she went into a house with their three-year-old son. A policeman was alerted to the young boy being alone in the car, which led the officer to the home that his mother had entered. As a result, she was arrested for child abuse and neglect, drug possession, and possession of drug paraphernalia.

A temporary custody order was put in place in November of 2004 resulting in Stephanie only being able to be with the children for seven hours, one day a week.

Stephanie filed her response in December of 2004. In the filing, she claims that her five-year-old son was within her sight the entire time. She also states that she was not “guilty of inappropriate marital conduct” but Geoffrey was.

Counter-Defendant has not played an active role in the lives of the minor children at any time coming and going as he pleases and living at a separate address in Knoxville, Tennessee.

Stephanie filed her divorce response two days after she obtained an order of protection against Geoffrey. In that filing she detailed an alleged altercation with Geoffrey during her visitation with the children two days prior, as well as allegations of prior abuse:

Respondent [Geoffrey Paschel] assaulted me [Stephanie] in Thunder World parking lot 12-18-2004 in front of children. I was afraid the children could’ve been hurt in this struggle in the car.

Around May of 2001, when my youngest son was 6 months old, he told me he was going to take my life and pushed me and the 6 month old on the floor and tried to choke me to death.

(In September or October of 2004) I’ve also had to wrestle a shotgun away from him after he had threatened to kill us both. The children tried to assist me by hitting him and the 5 year old bit him.

In November of 2004 I tossed a piece of pizza at him at the table because he was talking so nasty in front of the kids, so he picked it up and rubbed it in my face. [The oldest son] walked over and hit him.

Approximately 5 years ago respondent shoved petitioner up under the cabinets & held a knife to her throat & told her he would kill her. He also has said he would have other people kill her.

The order of protection was signed off on by a magistrate on December 20.

In January of 2010, Stephanie was accused of violating a restraining order in regards to Geoffrey’s new wife. Stephanie was “found to be in willful violation of the Restraining Order” and she was given a suspended sentence of ten days in jail.

Geoffrey was found in contempt for violating the couple’s parenting plan, and he was also given a ten-day suspended sentence.

Stay tuned for more information on Geoffrey as we continue to post installments of “The Geoffrey Paschel Files.” Here is a list of all of our posts so far, which we will continue to update and include at the end of each of the articles: