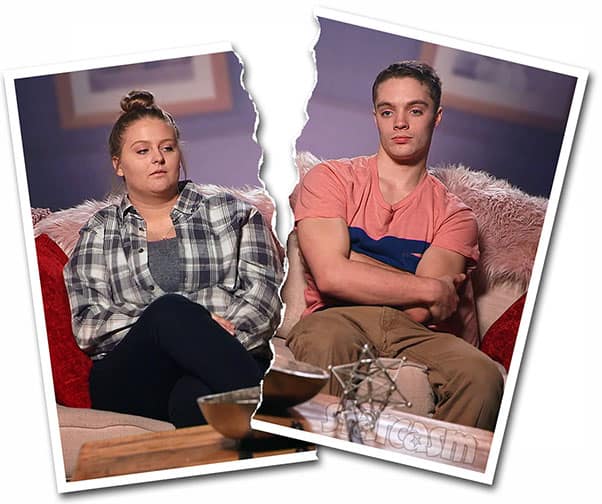 It appears that the rather bumpy marriage between former Unexpected couple Tylor Strawmyer and Laura Barron is coming to an end as Tylor officially filed for divorce earlier this month.

According to court records, Tylor filed for divorce on May 3. The case is still in the early stages, with the first hearing scheduled for July 12 via Zoom.

The divorce filing comes a little less than three years after Laura and Tylor secretly married in July of 2018. Since that time, the couple’s relationship was quite a roller coaster. Tylor joined the Navy, and the family later relocated to California where he was stationed.

Meanwhile, Laura welcomed the couple’s second child, son Leo, in October of 2019. Laura announced a third pregnancy in May of 2020, but she suffered a miscarriage a few months later. Within a month of sharing information about her miscarriage, it was revealed that the couple had split.

Laura and Tylor reconciled late last year, despite Tylor reportedly getting a woman in California pregnant. However, the reconciliation obviously didn’t last.

We’ve covered Tylor and Laura rather extensively over the past few years, and I’ve put together a rough timeline of their relationship (and other) drama since their appearance on Unexpected Season 2.

I have stated numerous times that I was disappointed that TLC didn’t continue to document the couple on additional seasons. Initially, that was because they appeared to be the only mom and dad on the show working towards a happy ending together. Plus, I was really curious what the military life was like for a young family. I am still very disappointed that Laura and Tylor were not on additional seasons, but now it’s because of how much over-the-top drama they would have brought to the screen!

OK, on with the timeline…

September 28, 2018 Tylor joins the Navy! Plus, he explains the cheating, his hair & the whole male stripping thing

Unexpected dad Tylor Strawmyer has inspired A LOT of conversations among viewers this season! In addition to openly considering a career as a male stripper (in front of Laura’s very Christian parents, no less), Tylor was also called out by Laura for cheating. Tylor has tackled all of these topics on social media, as well as explaining how he got those bald patches in his hair — and revealing that he has joined the Navy!?

November 28, 2018 Laura and Lucas reunite with Tylor at his Navy boot camp graduation

The happily ever after continues for Unexpected couple Laura Barron and Tylor Strawmyer! As we were the first to report in late September, Tylor joined the Navy and had just left for boot camp — two months after the couple got married. Tylor completed his eight-week boot camp stint last week, and Laura made the trip up to see him after graduation.

December 13, 2018 Laura Barron says everyone asked back for Unexpected Season 3 except her

April 2, 2019 Laura Barron is pregnant again, due in October

Unexpected mom Laura Barron hinted that she might be pregnant in her Instagram story on Monday, but fans just assumed it was an April Fools’ Day prank. NOPE! Laura confirmed moments ago that she is pregnant with her and husband Tylor Strawmyer’s second child and due in October!

Congratulations to former #Unexpected dad @TylorStrawmyer as he graduates Navy A school! He and his pregnant wife @laurabarronn are currently in the process of moving to San Diego as their whirlwind relationship begins yet another new chapter. https://t.co/L2T5EINPT7

Congratulations to Unexpected mom Laura Barron! The former reality star gave birth to her second child, a boy, at 1:58AM this morning! Keep reading to get all the details on lil’ Leo, including photos of him with mom Laura and dad Tylor!

Just seven months after Unexpected mom Laura Barron welcomed her second son with husband Tylor Strawmyer, the 20-year-old has just revealed that she is pregnant with their third child! Keep reading to watch Laura’s YouTube pregnancy announcement that includes the moment she found out, as well as her fake Instagram Q&A session in which she revealed the news to Tylor!

Unexpected parents Laura Barron and Tylor Strawmyer seemed to be defying the odds as the only mom and dad from all three seasons of TLC’s popular teen pregnancy reality series to remain together. Unfortunately, it appears that the couple’s unlikely happily ever after has ended.

Unexpected Season 2 couple Laura Barron and Tylor Strawmyer had a seemingly acrimonious break up back in June, but Laura shocked her Instagram followers on Thursday when she posted a rather joyful Instagram video with Tylor and their two kids. Of course, any potential reconciliation might be hindered by a surprising monkey wrench: Tylor’s new ex-girlfriend says she’s pregnant and due in June!