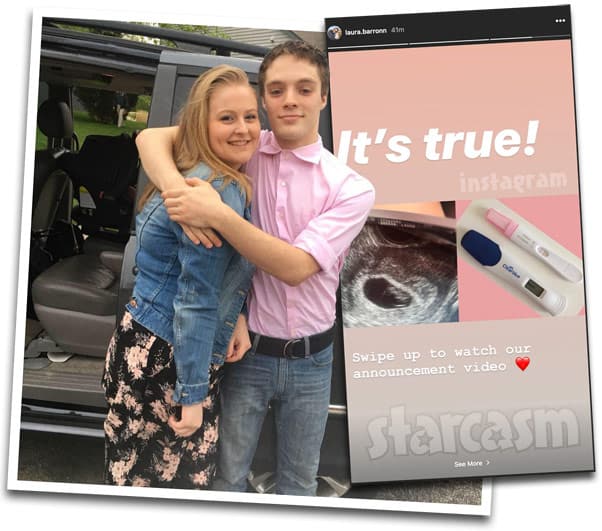 Unexpected mom Laura Barron hinted that she might be pregnant in her Instagram story on Monday, but fans just assumed it was an April Fools’ Day prank. NOPE! Laura confirmed moments ago that she is pregnant with her and husband Tylor Strawmyer’s second child and due in October!

The video shares the couple’s parental timeline, beginning on July 2, 2017 when Laura found out she was pregnant with her son Lucas. On October 14, the couple shared a gender reveal, and on February 12, 2018, Lucas was born.

“It was the happiest day of our lives,” the video says of Lucas’ birth. “He has brought us so much joy. And now we are expecting another October 23, 2019.”

The message was accompanied by two positive pregnancy tests.

“We can’t wait to meet you!” the video concludes.

Neither can we! Unfortunately, we won’t get to do that via TLC as Laura will reportedly not be back for the next season of Unexpected. However, she and Tylor are great about updating fans via social media, so be sure to follow along on her Instagram and YouTube for pregnancy updates!

If you were looking for an update on the couple, Tylor graduated Navy boot camp back in November and everything seems to continue to be going great for them. Laura got an apartment in Illinois earlier this year so that she and Lucas could be near where Tylor is stationed. He will be stationed just outside of Chicago for at least a year.

Congratulations Laura and Tylor! These two appear to be a genuine happy ending, and I wish their growing family nothing but the best!