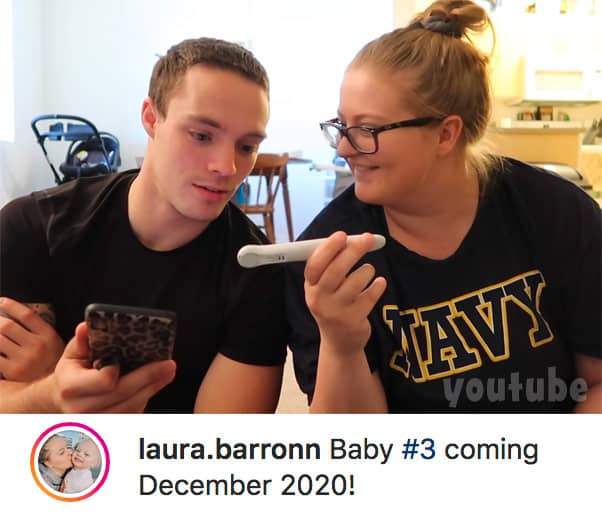 Just seven months after Unexpected mom Laura Barron welcomed her second son with husband Tylor Strawmyer, the 20-year-old has just revealed that she is pregnant with their third child!

“Baby #3 coming December 2020!” Laura captioned an Instagram gallery that included a positive pregnancy test and a sonogram dated May 6. (Gallery embedded below.)

Laura also shared a YouTube announcement video that documents how she found out she was pregnant more than a month ago. The video begins with footage from April 16 in which Laura says that she has just taken a pregnancy test and wanted to share her reaction to whatever the results are. (She later reveals that her period was five days late at the time.)

“No, we were not trying,” Laura says before the big reveal. “I literally just had a baby like six months ago, so this would be, like, a huge surprise and I’m really nervous.” She points out that she really doesn’t think she’s pregnant, but is recording just in case.

As you probably guessed, the pregnancy test does turn out to be positive, and Laura seems genuinely surprised.

Laura then reveals that Tylor is at work and he will be home “really soon.” She starts to try to plan some way to capture the reveal to him on camera without him knowing. The idea she comes up with is to act like she is answering questions in her Instagram stories. One of the questions will be whether or not Tylor knows that Laura is pregnant, at which point she will tell him about the positive pregnancy test.

Tylor got home at about 1PM and was game to participate in the Q&A. The video fast forwards through a few questions before they get to “Any more babies in the future?”

Tylor stares intently for a few seconds before replying flatly: “No.”

“I don’t know. Nine months?” Tylor replies as he looks at his watch.

At this point, Laura whips out the pregnancy test and shows him the positive result. Tylor can’t believe it. “It does not say that!” he says incredulously. “Laura, where’d you get that fake test from?”

Eventually, Laura is able to convince him that it’s real as she explains that was the reason she wanted to film him for the Q&A.

After the video ends, the couple shares a written update:

We were both so shocked and were not expecting it. After having time to process it, we’ve been getting really excited to add on to our family. We’re hoping for a girl this time!!! But we’ll be just as happy for another little boy.

Laura added the following message in the video description:

I’m pregnant again! so happy to finally share the news with you! Thank you so much for watching!! I hope you enjoyed today’s video! Subscribe to become a part of our journey as a military family and young parents of two.

The pregnancy announcement didn’t come as a huge surprise to Laura’s followers because there were a couple recent hints that had many guessing another baby was on the way.

In addition to her announcement that she was leaving OnlyFans, Laura shared an Instagram story post five days ago linking to her YouTube channel along with the message: “Make sure you’re subscribed! There’s a super exciting surprise coming soon…”

#CONGRATULATIONS to #Unexpected mom @LauraBarronn and husband @TylorStrawmyer as they welcome their second child together, a baby boy named Leo! 💙 https://t.co/dstXS6Larz

Congratulations to Laura and Tylor! They are the only mom and dad from all three seasons of the show to remain together. (Tiarra Boisseau is still with Dee Ragland, but it was Tiarra’s sister Tyra that was the official cast member.) In case you missed it, Tyler joined the US Navy in the fall of 2018 and graduated from boot camp in November of that year.

In April of 2019, the couple announced that Laura was pregnant with their second child, and on October 17, Laura gave birth to their second son, Leo Brian Strawmyer. Leo’s birth came just a couple months after Tylor graduated Navy A school and the family relocated to San Diego, California.

The young family has quite the story so far, and I’m guessing I’m not the only one who is disappointed that TLC didn’t choose to continue documenting them for Unexpected.