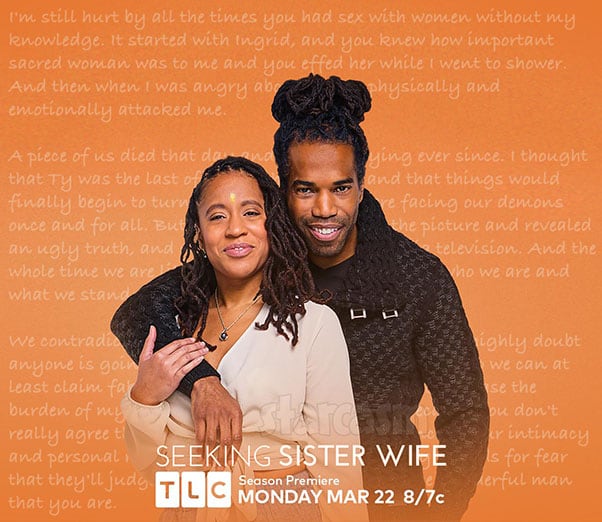 In our previous post we recapped the most recent interview with Ariadne Joseph, a former sister wife of Seeking Sister Wife couple Dimitri and Ashley Snowden. Ariadne brought numerous receipts to the interview, which included a series of text messages from Ashley and Dimitri, as well as a sampling of her interactions with the legal department of TLC’s parent company, Discovery Communications.

Our recap was already so wordy that we didn’t feel we could include an incredibly long message that Ariadne says Ashley sent to Dimitri. This is pretty much the CVS receipt of receipts!

Before sharing a transcript of the message, which was read by John Yates in the video, I feel I should preface it a bit to provide context.

Ariadne says that it was common for Dimitri to share messages that Ashley sent him with other women. She explains that this message was sent to another former sister wife, who then sent it to Ariadne after the first season of Seeking Sister Wife. That season featured Joselyn, who is mentioned in the message.

#SeekingSisterWife In a disturbing new interview with @JohnYates327, former Snowden sister wife Ariadne Joseph speaks out about abuse she suffered while living with Ashley & Dimitri. She says she & other exes told TLC, but they kept filming new seasons. https://t.co/UoigdBe9nu pic.twitter.com/Fl5MwTd06F

Ashley also mentions a Claudette in the message, which Ariadne says was Dimitri’s wife that he cheated on with Ashley. I was aware that Dimitri was married before Ashley, but that woman’s name is distinctly African (I believe she is from Zimbabwe?) and not even close to Claudette. The ex-wife that I know about filed for divorce from Dimitri in July of 2011. Ariadne says Ashley and Dimitri have been together for 10-11 years, so it has to be her.

Anyways, Ashley brings up Claudette and suggests that her troubles with Dimitri were perhaps just bad karma from their affair.

The third and last woman to be mentioned in the message is Ingrid, who Ariadne says was a woman that the Snowdens recruited from Brazil. “From what I heard, she was very beautiful,” she says. “Ashley hated her. Dimitri loved her.” In the end, Ingrid was reportedly sent packing by Ashley.

There is a point in the message in which Ashley references certain sexual acts that she is apparently not too fond of (unlike Dimitri). I believe John substitutes his own words to avoid profanity issues with his channel, so I put the terms he used in brackets just in case.

OK, here is the message allegedly from Ashley to Dimitri, followed by the full video with a reading by John Yates, as well as Ariadne’s explanation and commentary:

Deep down inside I feel like we are out here living a lie. No woman on this planet would knowingly accept the things I’ve accepted with regards to infidelity. As I sit here and think about my actions and my inactions, I feel like I’m cold and have only grown colder to you, Dimitri, with each passing year as I develop some sort of amnesia around my feelings of what’s happened and what’s happening.

I thought I was a big girl, but I think that’s some sort of denial that even I didn’t recognize until boiling all the fat off the bones. My behavior this evening was indicative of the fact that I’ve not still addressed my pain.

I’m still hurt by all the times you had sex with women without my knowledge. It started with Ingrid, and you knew how important Sacred Woman was to me and you [effed] her while I went to shower. And then when I was angry about it, you physically and emotionally attacked me.

A piece of us died that day and has been dying ever since. I thought that Ty was the last of the deaths we’d die and that things would finally begin to turn around because we were facing our demons once and for all. But then Joselyn came into the picture and revealed an ugly truth, and now it’s cemented in time via television. And the whole time we are literally lying to America about who we are and what we stand for.

We contradicted ourselves so much on the show, and I highly doubt anyone is going to believe it. Luckily it’s reality TV, so we can at least claim fake news to save face. And I can’t even release the burden of my pain by talking to you about it because you don’t really agree that it could be what’s put a hindrance on our intimacy and personal relationship. And I can’t talk to my friends for fear that they’ll judge you without understanding the wonderful man that you are.

But even more, I’m afraid that they’ll judge me for staying with you, kind of like [Akimi? Ari explains this is Ashley’s friend, but I’m not sure of the spelling], who stays because of her love for the men who keep doing the same thing over and over — and yet we judge her.

And then, in the back of my mind, I’m like, “Wait, why did I bring this on myself?” Though I didn’t find out about [Dimitri’s ex-wife] Claudette until after I’d fallen for you. I believe Claudette was the first one, and only because she messaged me did I somehow bring this on myself due to karma.

I stayed with you anyhow. Do I somehow deserve this because I was aware that that you did it to her? Why would I think you wouldn’t do that to me? Kind of like Eniko and Kevin Hart.

I keep mentioning wanting to pause with bringing new women into our life so we can work on us, but i’m wondering if we could really just need to pause it — pause us. And this is just a question, not a suggestion

But you need a break to go out and discover the world without me holding you back from the type of family/life you are trying to build. If you were to agree — no, take an oath that you would use protection to prevent pregnancy and infection.

Interestingly, when I mentioned over the course of last year that I felt depressed, it felt like you dismissed it in the same way you would dismiss when I would bring up illness or something with the children or with us. You would feel some type of way, that I would just jump to the worst case scenario and that it couldn’t be what I was saying it could be. But the way I felt this year was a culmination of not dealing with past issues and then feeling like I was stuck looking in the mirror, terrorized by my own shadow, and terrorized by outside forces — like the she devil and he devil.

I was so numb, while at the same time trying to be super supportive and help you find the silver lining through tapping into spirituality. My intimacy took the shape of constant need to heal. I just know that we both need healing.

I am really so sorry that I’ve made our marriage so uncomfortable. I am really sorry that I am not the most affectionate person, that I suck at laundry, that I don’t feed you enough, that I don’t listen better, and that I’m not giving you what you need, a that you feel so undervalued and overlooked by me, that I don’t care. I want nothing more than for you to be happy, content, and inspired to achieve all your goals and dreams.

I have to do better so we have no choice but to heal. I apologize in advance if this long message angers you. It’s not my intention to upset you, but it’s how I feel.

In the video above, John’s reading of the message begins at 1:14:47. At one point, Ariadne’s phone dies and she is absent for a while. John continues reading the message, and Ariadne later returns to offer up her commentary.