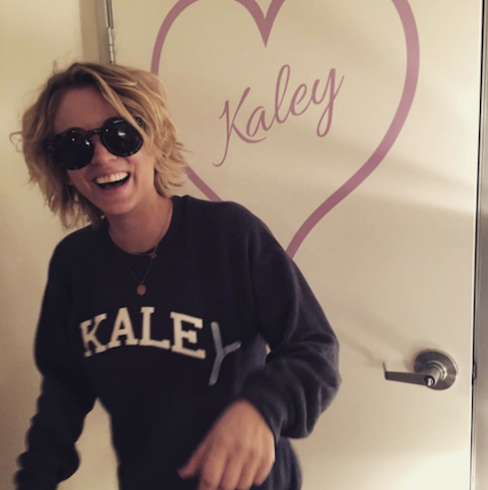 The newest Kaley Cuoco tattoo is a beautiful one–and a painful one, since the reason the Big Bang Theory star got it was to cover up the wedding ink she got to celebrate her short-lived marriage to soon-to-be-ex-husband Ryan Sweeting. It’s been a rather rough year for the highest-paid woman on television, who announced her divorce from Sweeting this past September. A harsh battle quickly ensued, with Sweeting demanding “spousal support” from Cuoco (despite the terms of a pre-nup which will make it very difficult for him to win anything), and allegedly angling for her entire $45 million fortune.

Throughout all that, Cuoco still had the tattoo celebrating her wedding literally riding on her back. So, as the divorce inches toward completion, the 29-year-old (whose 30th birthday is in five days) decided to remedy the problem with a second, metaphorically appropriate design. Behold:

Thank you @nero_sct @studiocitytattoo for helping me right my wrongs.. ?? note to self- do not mark your body with any future wedding dates ? #under30mistakes #donttakeyourselftooseriouslykids

@nero_sct the deep, meaningful, larger than life meaning behind this beautiful piece of ink, is….. It covered the last one. A photo posted by @normancook on Nov 24, 2015 at 9:07am PST

Shortly after Cuoco uploaded the two photos to her Instagram page, the hashtag #under30mistakes began trending on Twitter.

No word yet on when the divorce is expected to be official. Until then, Kaley can take solace from her new tattoo–and from her many, many dogs.

PHOTOS A Texas man gets a tattoo of “The Dress”