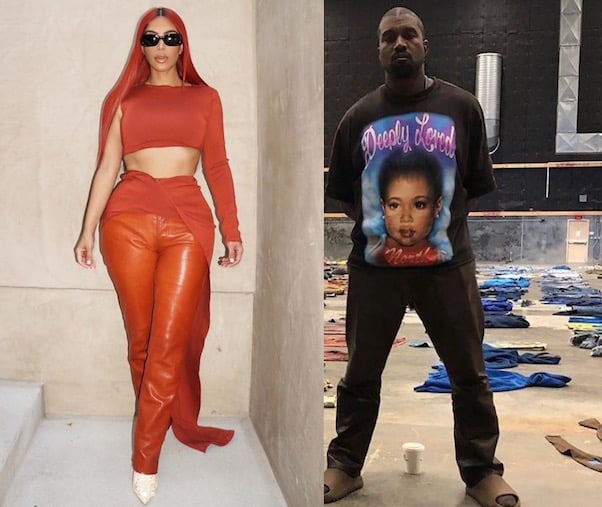 It’s both a surprising and unexpected Kim and Kanye divorce update, as multiple anonymous sources claim the first couple of celebrity royalty is “close” to an official split. It seems Kim is holding out hope that Kanye’s extended manic episode will soon subside — but she’s also got a contingency plan in case things get truly unpleasant.

In case you’ve been under a rock or hiding out in a cave the last few months, here’s a quick recap. But, first: go back. Go back into hiding. It’s better there. Why would you come out of hiding now? Things are still terrible. There’s no end in sight. Did you need some more supplies? Lay them in quickly and return to your sanctuary, secure in the knowledge that you are still one of the lucky ones.

For all the unlucky ones: Kanye has been on an extended ego trip / in an extended mental health crisis for the last few months, approximately since he declared his run for president on the 4th of July. Despite a long and growing list of states where he won’t appear on the ballot, plus ample evidence the Republican party is using him as a potential spoiler, Kanye insists his run is for real.

Which is where the second part of the current Kanye difficulty comes in. He’s made several bold-ish policy declarations so far, none more controversial than his pro-life stance. This is apparently a huge problem for Kim Kardashian, who was allegedly having a hard time dealing with her husband’s bipolar disorder before he started getting into political specifics. The two were said to be talking about a trial separation several months ago (or were actually engaged in a clandestine one).

Which brings us to the current Kim and Kanye divorce update. Over the past few days, a string of tabloids has been pushing the general idea that the couple’s marriage is not long for this world. Page Six got an anonymous source to claim “Kim has the whole divorce planned out”; the source went on to say that the reason Kim hasn’t pulled the trigger is “she’s waiting for [Kanye] to get through his latest episode.” (The publication also pointed out that earlier this summer, a “separate source” said Kim couldn’t yet file the papers because it wasn’t “a good look.”)

Beyond that, The Blast reported that “divorce seems to be the option [Kim is] considering” at this point. Their article doesn’t quote any anonymous sources, and it doesn’t make any other mentions of the D-word. But it also doesn’t mention or reference any other options, so the implication seems to be that divorce is the *only* option on Kim’s mind.

And Us Magazine went down a similar road, writing that Kim is “considering her options” while “hoping & waiting for this to pass.” Which unearths a kind of unpleasant truth about Kim and Kanye’s marriage. Bipolar disorder isn’t something that just goes away. You can get medication to treat it, and you can get a therapist to help, but you won’t ever “beat” it. So the implication of all these articles and anonymous sources seems to be that Kim is just waiting for Kanye to come back down from his cloud before telling him she’s through.

Except that that isn’t quite it, either. After all, divorce is always an option. Even for a good marriage. Divorce is always sitting there, in case you need it, like a cash stash in a safe. And with a high-profile celebrity marriage — maybe *the* high-profile celebrity marriage of our time — that safe is always unlocked. You never know when you’ll need to bolt in the night. Kim has had a divorce plan since day one. Whether she feels the need to put it into practice is a much more protracted question, and it makes for good gossip.