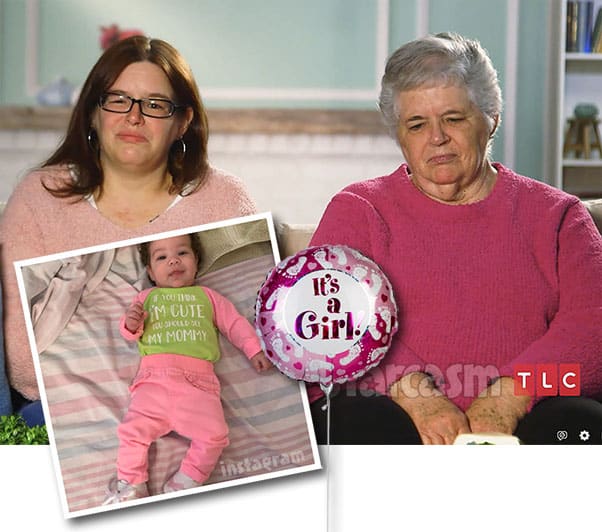 Unexpected dad Alex Wilson has a baby sister! And his daughter Layla has an aunt that’s two years younger than her!

We reported back in May that Alex’s mom Julie was pregnant, and she was reportedly just over eight weeks along at the time. She said she was due in November, and that looks to have been roughly when she welcomed her daughter, Nevaeh!

Nevaeh’s exact birthday is still unclear, thanks in part of Julie keeping things a bit hush hush in regards to her birth. However, Julie finally shared a couple photos of Nevaeh on Instagram in February and March.

In addition to the photo included above, Julie also posted a photo of Nevaeh with her niece Layla: 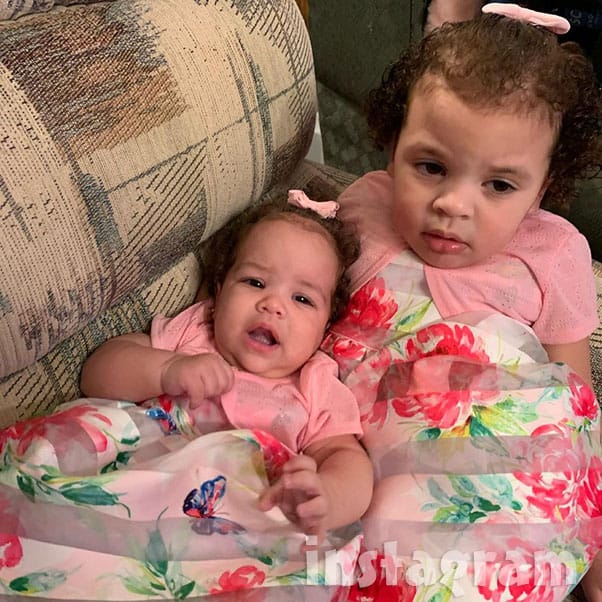 It’s clear that the two girls look A LOT alike, which had numerous fans openly questioning whether or not Nevaeh and Alex share the same dad. “Wow, it is crazy how much they look alike,” once commenter wrote. “Do Alex and his sister share the same father?”

“Yea they do,” Julie replied.

Wait, what?! The last we heard Julie was considering letting a man move in with her that she had recently met online, right? Well, it appears that fell through and Alex’s dad re-entered the picture!

Of course, Julie did foreshadow that the dad wasn’t someone new in the very early stages of her pregnancy. From our previous post:

Julie hasn’t revealed any information about who the father is, but she did seem to drop a hint on April 25. “When a blast from the past comes back in ur life and it’s everything u ever wanted and more no names mentioned right now but y’all will see!!!” Julie wrote. “He has my heart ❤️ again!!! Love u babe!!!”

At the time of her announcement last year, Tyra Boisseau was completely supportive. “Here for you always me and Layla can’t wait 💗💗,” Tyra posted online in response to the pregnancy announcement.

However, Tyra expressed her apprehension to Unexpected producers. “I was really shocked when Julie told me that she was pregnant,” she says during an interview segment for the show.

Later in the episode, Julie awkwardly jokes about the fact that she left Alex with his grandmother to raise, and now she’s pregnant again.

“So now you’re planning on raising another child after you, like, threw him to the side?” Tyra asks in an interview segment. “She could be ready,” Tyra continues. “I hope she’s ready to take on the responsibility that she didn’t take on with Alex. I guess that’s all I can do is hope that she’s ready.”

If it turns out that Julie isn’t ready, she could take inspiration from Tyra and leave Nevaeh with Alex and Patricia while she heads off to college! 😉

Alex is also a bit wary about having a little sister, but he stops just short of actually saying anything too judgmental. “It was a lot to take in. It’s definitely weird to think that Layla’s going to have an aunt that’s going to be, like, two years younger than her because usually when you think of aunts and uncles, they’re older,” Alex says to the camera. “Not in this case. This is something else. Something… It’s something, that’s all I have to say about it.”

Tonight’s episode features self-shot video in which Julie reveals to her mother, Patricia, that she is pregnant. Patricia is not happy at all, and after expressing her disbelief, she walks off.

“I was upset when Julie told me she was pregnant,” Patricia recalls in a later interview. “Of course it’s going to be more of a burden, and I would love to someday retire completely, but a newborn is not cheap. It just worries me.”

Reanna & Taron have reportedly been cut from @TLC's #Unexpected in the middle of Season 4 and will not be included when the show returns in March 😬 (Tyra recently hinted that she is done, but she and Alex were included in the 4B preview trailer.) https://t.co/QVagHWTBpn

To see how the pregnancy (and birth?) plays out on screen, be sure to tune in to new episodes of Unexpected airing Monday nights at 10/9c on TLC! (I would say that you could also check out new episodes on discovery+, but I don’t think last week’s episode ever showed up on the streaming service?)