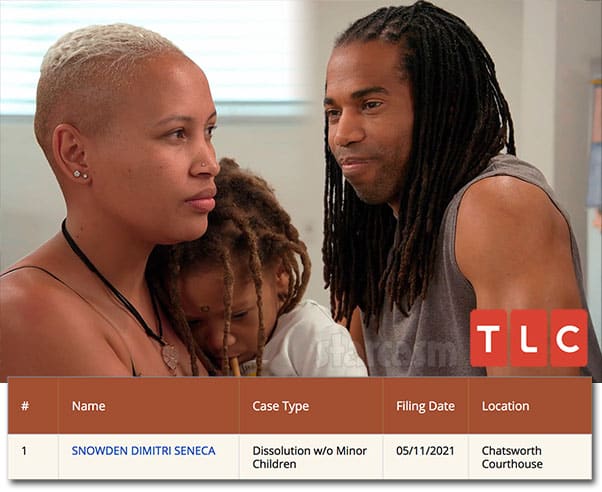 We have a bit of a surprise development in the Seeking Sister Wife Snowden family scandal as Dimitri Snowden has officially filed for divorce from his estranged wife, Christeline Petersen. The filing comes as a surprise because it was not public knowledge that the two were officially married.

According to court records, Dimitri filed for dissolution of marriage without minor children in Los Angeles County, California on Tuesday, May 11.

It’s also interesting to note that when asked to describe her relationship to Dimitri, Christeline checks the box for “We are now married or registered domestic partners.” She also checks the box indicating that she and Dimitri no longer live together.

I thought perhaps Christeline and Dimitri were officially registered as domestic partners in California. I didn’t really give much thought to them being legally married! In retrospect it makes sense given that Christeline is from South Africa. I’m sure that a legal marriage would have helped her and her two daughters move to the United States permanently. It’s unknown if she came to the US on a k-1 visa.

I should point out that Dimitri and his “wife” Ashley Snowden were never legally married. Dimitri was legally married at least once before to a woman that appears to have been born in Zimbabwe. They were officially divorced in July of 2011, which was right about the time Dimitri and Ashley met. (From what former Snowden sister wife Ariadne Joseph has stated, Dimitri and Ashley met in a biblical way numerous times before his wife found out and later filed for divorce.)

We obtained what court documents were available, but that unfortunately did not include the actual divorce filing (yet). One document was simply a judge assignment. The other document was the standard court order to share financial information for parties involved in a divorce.

UPDATE – We now have the actual divorce filing. Click here to read the full document.

If you’ve been keeping up with Ariadne’s exposé of the Snowdens over the past week, then you are aware of her claims that Dimitri Snowden is basically broke. It will certainly be interesting to see what he claims to be his income and current financial situation. Of course, that information may not be made available to the public.

Here are some excerpts from the financial disclosure order:

The court orders that both spouses in this case must:

✓ Current income and expenses, and

• You have a continuing duty to share material financial information, such as changes in income, until there is a final agreement about all financial issues in your case.

What information must be shared: You must provide the other spouse all important information regarding the existence, characterization, and valuation of all community and separate property assets and debts. You must provide access to all information, records and books that pertain to the value and character of assets and debts in which the community has or may have an interest. You must disclose to the other spouse all assets and debts in which the party may have an interest or obligation and disclose all current income and expenses. You must immediately update such information if there are any material changes. The disclosure duty regarding assets and debts is a continuing duty until the parties or the court divide the asset or the debt. The disclosure duty regarding income continues until a valid enforceable and binding resolution of child or spousal support, and professional fees occurs.

We will continue to monitor the controversies surrounding the Snowdens, and will share any major updates. Meanwhile, be sure that you are all caught up with the following Twitter links:

#SeekingSisterWife Alleged abuse details from the restraining orders filed by Christeline against Ashley & Dimitri Snowden! Will they be fired from the show? Plus, info on Dimitri's 1st marriage & that time he was sued for fraud. https://t.co/5ypd9VzOa5 pic.twitter.com/Sw2W6sFMDp

#SeekingSisterWife Tayler Middleton demands @TLC cancel the show in the wake of abuse allegations against the Snowdens. Co-stars Christeline, Vanessa and Tosha respond with supportive messages. Get a full recap of all the TLC- and Snowden-bashing! 😬 https://t.co/H86oWMwfVZ

#SeekingSisterWife In a disturbing new interview with @JohnYates327, former Snowden sister wife Ariadne Joseph speaks out about abuse she suffered while living with Ashley & Dimitri. She says she & other exes told TLC, but they kept filming new seasons. https://t.co/UoigdBe9nu pic.twitter.com/Fl5MwTd06F

#SeekingSisterWife Former Snowden sister wife Ariadne Joseph shared lots of receipts in her latest exposé interview with @JohnYates327, but this alleged message from Ashley to Dimitri is definitely the CVS receipt of receipts! 😳 https://t.co/RLpr9UrRJS

SEEKING SISTER WIFE Are Garrick and Roberta married now? Does Dannielle have a new boyfriend?