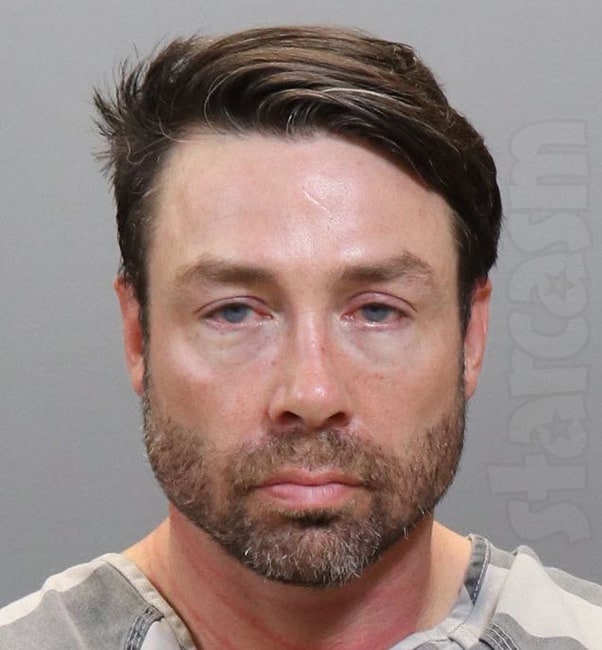 90 Day Fiance: Before the 90 Days star Geoffrey Paschel has a new mug shot photo to add to his extensive collection.

The former reality star was booked into jail in Knoxville earlier today after being found guilty in court of aggravated kidnapping, domestic assault, and interference with an emergency call.

In his latest booking photo, Geoffrey appears a bit teary eyed as he poses wearing grey and white stripes. He is facing 8-30 years in prison on the felony aggravated kidnapping conviction. The other two charges carry much lesser sentences. Those shorter sentences will most likely be concurrent to the kidnapping sentence.

UPDATE – District Attorney General Charme Allen issued a statement on Friday revealing that Geoffrey will be facing a minimum 12-year prison sentence due to his previous convictions. Also, he will not be eligible for parole.

In an interview in May of 2020, Geoffrey revealed that he was offered a plea deal in which he would not have to serve any time if he pleaded guilty to misdemeanor domestic assault.

From our interview recap:

Geoffrey explains that when he was arrested in June he was initially facing just a misdemeanor charge of domestic assault, which explains why he was able to leave the country and fly to Russia to film. “They tried to drop the charges, but the ‘victim’ [Geoffrey uses air quotes] didn’t want to drop it and she pressed forward. And then they offered me no punishment whatsoever just to have it on my record. I said ‘No! Absolutely not!’” Geoffrey was told that if he didn’t take the offer that they would convene a grand jury and “trump up the charges,” as Geoffrey put it.

“‘You do whatever the hell you want to do, I am not accepting anything other than a full exoneration,’” Geoffrey says he told the prosecutor. “So that’s what they did.” If you’re curious, the amended charges that Geoffrey is currently facing are aggravated kidnapping, domestic assault, interference with emergency call, and vandalism.

Getting back to the present… The unanimous guilty verdict was returned by a jury after a relatively short deliberation.

Here’s video of the verdict being read. Geoffrey can be seen removing a wedding ring after the verdict is read. It’s also interesting to note that his good friend Mary Wallace appears to be in the courtroom. She looks emotional as she accepts Geoffrey’s coat from his attorney before Geoffrey was handcuffed and escorted out of the courtroom.

I will end this post with links to our previous articles about Geoffrey, including the accusations of rape and sexual abuse by his wives.

Geoffrey Paschel calls his Before the 90 Days co-star Big Ed Brown a pervert during an interview on The Domenick Nati Show. Geoffrey also talked about his pending kidnapping and assault case as well as the awkward love triangle between himself, Varya and Mary!

On 90 Day Fiance: Before the 90 Days, controversial star Geoffrey Paschel is currently caught up in a love triangle with his Russian girlfriend Varya and his good friend Mary from Tennessee. After Varya rejected Geoffrey’s marriage proposal, he returned to the United States and decided to try to pursue a relationship with Mary. The two have a friendship history together, they live close to each other, and they also have something relatively unique in common: being arrested for domestic violence!

In a new YouTube video, Geoffrey opens up about the passing of his 13-month-old son Kazhem Paschel in March of 2018. In addition to Geoffrey’s emotional account of what happened, the video includes medical records, audio recordings, a 911 call transcript and more.

The trial of 90 Day Fiance: Before the 90 Days star Geoffrey Paschel has been delayed yet again. Geoffrey is still facing charges of aggravated kidnapping, domestic assault, interference with an emergency call, and vandalism after an altercation with his American girlfriend in June of 2019. The altercation was shortly before Geoffrey started filming with TLC, including his trip to Russia to see Varya.

The trial of 90 Day Fiance: Before the 90 Days star Geoffrey Paschel started in Knoxville, Tennessee. Get a recap of day one, including graphic photos of the injuries sustained by Geoffrey’s fiancée (!!) Kristen on the night of the incident. Plus, video of the trial via Court TV’s live stream!

BEFORE THE 90 DAYS Paul is back in the US, but is his pregnant wife Karine with him?