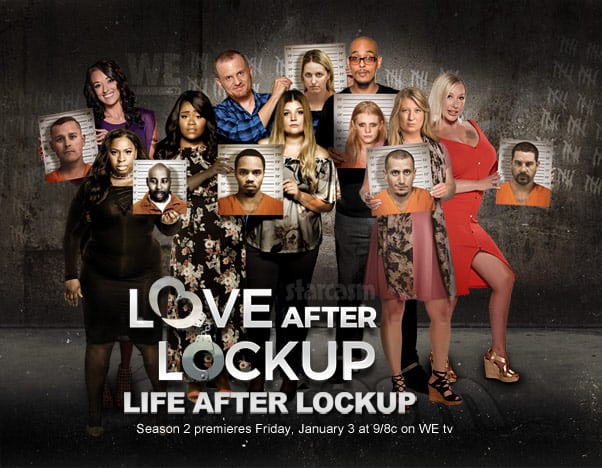 WE tv confirmed last week that Love After Lockup: Life After Lockup would be returning for a second season in January, and now we have the first extended preview trailer featuring all seven couples that will be coming back for more post-incarceration drama!

The preview reveals lots of info about the new season, including what appears to be confirmation that Brittany Santiago is pregnant with her second child with husband Marcelino!

Just as cast member Marcelino Santiago stated, the new series is set to premiere on Friday, January 3 at 9/8c. According to the press release accompanying the trailer, the new season will feature ten episodes.

WE tv shared brief descriptions for what viewers can expect from each couple on the new season. Here are the network synopses for each of the couples, followed by our notes — which contain quite a few spoilers, which are notated as such.

Brittany’s mom makes the move to Vegas for support as Brittany is expecting baby number 3. However, they’ve never truly confronted the issues about Brittany’s past. Will living in such close quarters reopen old wounds that run deep?

It’s unclear exactly what aspect of Brittany’s past will cause the tension between her and her mother (and potentially Marcelino). As we were the first to report, Brittany gave birth to two children while she was a troubled teen that were later taken from her and placed for adoption. There was also an incident between Brittany and her mother years ago that we will be sharing more information on soon!

SPOILER: In the most recent update on the custody battle between Brittany and her ex Tito over their son Giovanni, Brittany won temporary sole legal custody after Tito “tested positive for THC, Amphetamine, and Methamphetamine.”

SARAH AND MICHAEL AND MEGAN

Megan and Sarah continue to struggle on whether to forgive and forget Michael. Is the forever playboy harboring yet another huge secret that could cause serious repercussions and complications with Megan and Sarah?

Judging from the preview trailer, it appears as though this dramatic love triangle will become a love square this season as Michael pitches his woo at yet another young woman who is unable to resist the convict Casanova.

SPOILER: Michael has been posting on social media from Miami and talking about another woman. We don’t have a lot of information about her at this time, but we do know that Michael appears to have alienated his family. His sister has posted some very condemning things about Michael after he reportedly disrespected their mother.

While Andrea and Lamar are living separately, Andrea reveals a huge secret that could change everything. Can their relationship survive the distance?

Do we have any guesses about what Andrea’s “huge secret” can be? Besides the obvious pregnancy guess, I really have no idea! Maybe she talking to her kids’ dad again?

All I know is producers better figure out some way to get Lamar back to Utah — THAT’S what I want to see more of!

Cheryl decides to move to Colorado with Josh to keep their love alive, but will Josh be able to maintain his parole restrictions and keep himself out of the slammer?

Apparently blindsiding Chery with a sh*tty ass castle was not a deal breaker after all! I confess that I am surprised to see that Cheryl and Josh will be returning, and that Cheryl will reportedly be moving to Colorado. I assume that means she will be bringing her children this time?

Thankfully, it appears that viewers can look forward to yet another clownish cast member returning — Cheryl’s literal clown pal Tony! And judging from the trailer, it appears as though Tony the Clown might also be a preacher?!

#LoveAfterLockup Cheryl's convict boyfriend Josh has apparently failed at robbing more than just a bank! Visit Starcasm.net (article link in our stories) to find out about the other robbery, burglary, and theft charges he was connected to after he was arrested for robbing the bank. ? #TonyTheClown #LoveAfterHoldup #JohnWayneGracy

SPOILER: As we previously reported, Josh has been dating another woman for quite a while. Cheryl and Josh have also posted some incredibly harsh things about each other that seem nearly impossible to come back from. As a result, I’m getting “fraud” vibes here and I’m thinking that perhaps Cheryl and Josh might have rekindled their romance just for the cameras. That is purely speculation, however!

SHANE AND LACEY AND JOHN

Shane reveals a major secret he’s been keeping from Lacey, while Lacey has a secret of her own that could jeopardize everything. Meanwhile, John won’t give up on his love for Lacey.

Similar to Cheryl and Josh, I feel like this trio is keeping up the drama just for the cameras. Then again, Shane’s anger seems pretty legit in the clip, so who knows? (Maybe Lacey and John worked out a deal to keep up the triangle to get another season and they didn’t tell Shane? Hmmmmm….)

What are Shane and Lacey’s secrets? We still don’t don’t anything about Lacey’s actual baby daddy(s), so that’s always a possibility. Shane was incarcerated at the age of 17, but that doesn’t mean it’s impossible that he may have a child too. (Given the history of the show, I’m going to guess that Shane’s huge secret is an ex girlfriend that he’s still in contact with, or something yawny like that.)

SPOILER: Lacey and Shane still seem to be happily married. That could just be them putting on a show for social media, but I doubt it. Plus, John keeps getting arrested, so it’s going to be hard for him to remain a viable contender for cam girl Lacey.

#LoveAfterLockup cam girl Lacey's fiance John was arrested earlier today and charged with DWI – his second arrest since his release featured on the show. Get details on his arrests, including Lacey's other convicted felon fiance Shane's gloating response! https://t.co/wdNh60HVVF

Tony is released for the second time, but will he put his bad boy ways behind him once and for all?

Given how the most recent season of Love After Lockup ended, with Tony apparently lying to Angela about visiting a therapist so he could hook up with some woman in a hotel room, it was pretty much a given that we would be following up on their romance on Life After Lockup.

SPOILER: It was also pretty much a given that Angela and Tony would be coming back because WE tv filmed their recent wedding in Mississippi! Seeing as how they actually made it official, I think we can all assume that the two will overcome whatever obstacles they run into on Life After Lockup. Well, all of the pre-marital obstacles at least. 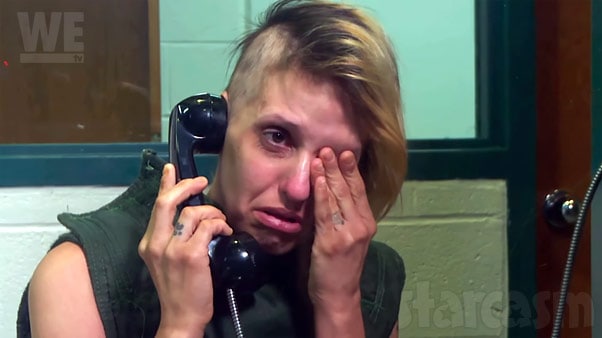 Will Clint stand by his wife? Or will he live up to his declaration “to leave Tracie once and for all if she gets locked up again?”

SPOILER: In case you missed it, Tracie found herself back in jail in Texas back in early August facing a felony drug possession charge. Clint was also arrested at the same time on a lesser drug paraphernalia charge. Clint posted bail and was out within 24 hours, but Tracie remained in jail for a little over two weeks before being released. It seems clear from her mug shot photo that the scene featuring an incarcerated Tracie in the preview trailer was recorded during this two-week period.

Clint and Tracie’s struggles continued after her release as they went back and forth on social media hurling drug use accusations and more at each other. The most recent update was from last week when Tracie, Clint, and Clint’s mother Alice got into a huge fight on Facebook after Tracie reportedly left rehab early and Clint was not there to pick her up as he promised.

It appears that Clint and Tracie are done for good at this point, but the two have reconciled before after similarly volatile break ups, so who knows?

Who are you looking forward to seeing again the most?

LOVE AFTER LOCKUP Caitlin still married to 2nd husband, he didn’t know about the show, plus Matt spoiler!