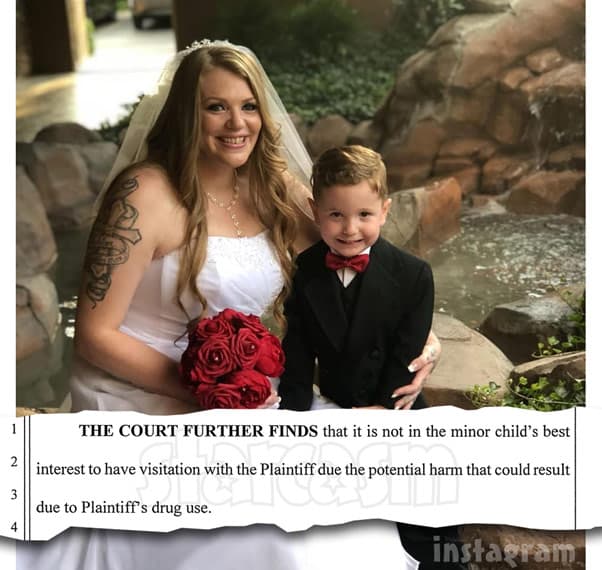 Love After Lockup: Life After Lockup star Brittany Santiago has been granted temporary sole legal custody and temporary primary physical custody of her four-year-old son Giovanni after his dad Tito failed a drug test that was required as part of the couple’s mediation agreement.

Brittany’s attorney filed the emergency application on Wednesday while Brittany and her husband Marcelino Santiago were in New York City to attend a premiere party for the new season of Love After Lockup.

The filing reveals that both Brittany and Tito were required to take a drug test after their August 6 mediation hearing. Brittany passed her test, but Tito “tested positive for THC, Amphetamine, and Methamphetamine.” The test results were not know by Brittany until August 14, at which point her attorney immediately filed the emergency application.

Brittany is concerned with the safety of the Parties’ minor child, Giovanni, being in [Tito’s] unsupervised care due to his drug use and the potential risk of harm to his minor child that could result from Plaintiff’s drug use while the minor child is in Plaintiff’s care.

Brittany is further concerned that Plaintiff’s drug use will not only inhibit his ability to care for the minor child, but also increase his anger/impulse control issues, placing the minor child in further danger. Adding to this concern is the fact that Plaintiff has sent harassing/abusive communications since the most recent hearing.

Brittany’s attorney states that she plans to file a motion to modify custody, but she was asking for an immediate temporary ruling prior to Giovanni’s next custody exchange scheduled for today. The District Court judge agreed, and signed off on the emergency application on Wednesday.

THE COURT HEREBY FINDS that in light of the positive drug test results, there is an unacceptably high risk that the Plaintiff will use drugs, including drugs such as methamphetamine, during his custodial time with the minor child…

…THE COURT FURTHER FINDS that there is an unacceptable risk of harm being caused to the minor child if Plaintiff exercises visitation pending a hearing on Defendant’s forthcoming Motion to modify custody.

The ruling gives Brittany temporary sole legal and temporary primary physical custody of Giovanni. It also orders that any and all contact between Giovanni and Tito be suspended until the hearing on Brittany’s forthcoming motion to modify custody.

We will continue to monitor the case and will update if there are any new developments.

UPDATE – Brittany retained full custody and Tito was ordered to pay child support after a court hearing on September 4. Click the link for all the latest!

Here is a recap of our coverage of Brittany and Tito’s explosive custody battle for Giovanni:

May 8, 2019 – Tito files for sole custody of son Giovanni after Brittany ‘kidnapped’ him ‘to create drama & boost television ratings’

#LoveAfterLockup #LifeAfterLockup Brittany and her ex Tito call a cease fire in their heated custody battle over 4-year-old son Giovanni – get all the exclusive details! https://t.co/8P7ogOKNtp