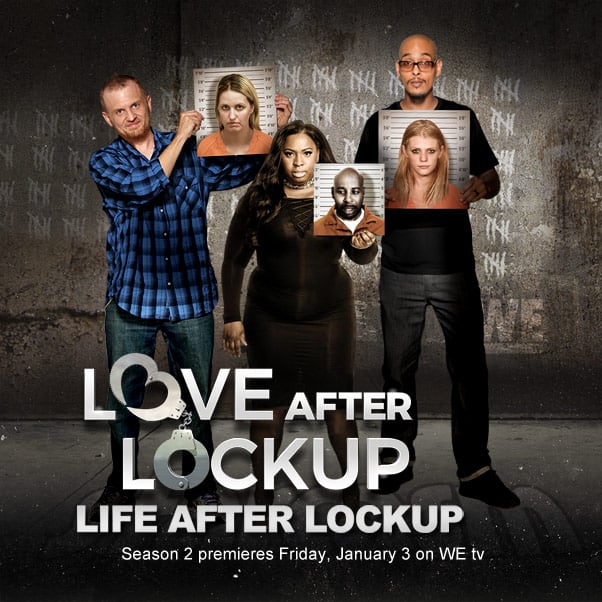 “Love After Lockup is among the most successful new reality franchises to emerge from the space in years, so we are both excited and eager to bring both shows back for new seasons on WE tv,” network president Marc Juris says in the release. “WE tv has strategically leveraged the crossover appeal of our original programming to expand our Friday night audience while also growing our core audience by double digits,” he adds. “Despite the seemingly endless number of shows available to viewers today, Love After Lockup proves that an original idea coupled with powerful storytelling will always attract, engage and grow an audience.”

WE tv has continued to grow its Friday night audience – the first half of Love After Lockup Season 2 was the fastest-growing program on television among women and adults 25-54, with viewership more than doubling from season premiere to finale across key demos. The series, which currently averages more than a million viewers per episode, was the #1 cable original on its finale night among women 25-54 earlier this year and continuously ranked as a top 2 cable program for the same key demo. The franchise also draws on what has traditionally been a Thursday night audience for the network, growing among African American women 25-54 by more than 50% in Nielsen live +3 ratings in the past year. WE tv is now the #1 cable network among African American women 25-54 on Friday Nights for 2019 to date. Additionally, WE tv also has 3 of the top 5 cable programs on Friday nights among African American women 25-54, with Love After Lockup ranked #1 in live +3 ratings.

The premiere season of Love After Lockup: Life After Lockup was the highest-rated season of the franchise to date among women 18-49, women 25-54 and tied among adults 25-54 with the first half of season two of flagship “Love After Lockup.” The popular spinoff following favorite Lockup couples as they build their post-prison lives repeatedly ranked as the #1 cable program in its Friday timeslot among women 25-54 during its first season. WE tv also consistently ranked as a top 5 cable network during its Friday night timeslot among women 18-49, women 25-54, adults 18-49 and adults 25-54 throughout the season. Social engagements for Love After Lockup have nearly tripled since season one, while the series is constantly a Top 10 Cable Reality program on Social on Friday nights.

In a move that has been extremely confusing for fans (and bloggers), WE tv chose to designate the current season of Love After Lockup as Season 2b instead of Season 3, despite the fact that it features all new couples (except for Season 1’s Angela and Tony). I’m certain there are very good financial and/or contractual reasons for WE tv to break the seasons down that way, but it is only going to make things extremely confusing when talking about Season 3 and its cast.

Speaking of cast, Marc Juris revealed three of the couples that will be returning for Season 2 (Thankfully is isn’t Season 1b) of Love After Lockup: Life After Lockup. In a conversation with Variety, Juris confirms that viewers will be seeing Brittany and Marcelino, Andrea and Lamar, and Clint and Tracie.

Marcelino shared his excitement about the announcement on Instagram, and he reveals that Love After Lockup: Life After Lockup will premiere on Friday, January 3. He also says viewers will be seeing the first preview trailer during the Love After Lockup Season Finale this Friday! Hopefully we will find out more of the cast then.

UPDATE – We did find out more about the cast! Click here to watch the preview trailer and get details on what to expect from all seven couples — including spoilers!

I would assume that one or more couples from the current season will be added to Life After Lockup. Unfortunately, not many of them appear to still be together, so that might limit WE tv’s options. I believe that Angela and Tony as well as Lacey and Shane are the most likely to be back given that both couples (SPOILER ALERT) eventually got married.

Curious about #LoveAfterLockup Tony's escape, capture, and re-release? We've got details from the court documents, including the fact that he managed to travel almost 2,000 miles before he was caught! https://t.co/DXnLmpe5Ri

Life After Lockup OG Scott Davey made a series of posts this summer about the network influencing his relationship decisions, so it was assumed that he and Lizzie would be returning. Their return is still possible, but their omission from Juris’ comments makes me think their days as full-time cast members are over. (If they were filming, the network can always use the footage for their Life Goes On series.)

Surprisingly, it appears as though the popular love triangle of Sarah, Michael, and Meghan may not be back either. Their story line last season was a bit stretched at times, but they certainly kept it entertaining! Thin or even hard-to-believe story lines have never kept Sharp Productions from pulling the trigger on bringing back controversial and entertaining stars before, so I kind of expected to see the prisónage à trois back again.

I wanted to point out that the most recent season of Love After Lockup didn’t do much to grow the previously snowballing franchise. You will notice that the numbers referenced by WE tv in their press release are from Life After Lockup and the first half of Season 2 of Love after Lockup. Both of those seasons started off well and grew steadily.

The current season of Love After Lockup grew only marginally from the first episode on. To illustrate my point, here are some live viewership numbers from Season 2a and 2b:

I’ve noticed a lot of complaints among fans online that some of the newer cast members seem a bit “thirsty” and the result is that some of their stories aren’t coming across as authentic as the previous couples’. Either way, fans will be getting more of the couples they are familiar with when Life After Lockup comes back on January 3 — and producers will get another go with a whole new batch of couples when the original Love After Lockup returns!