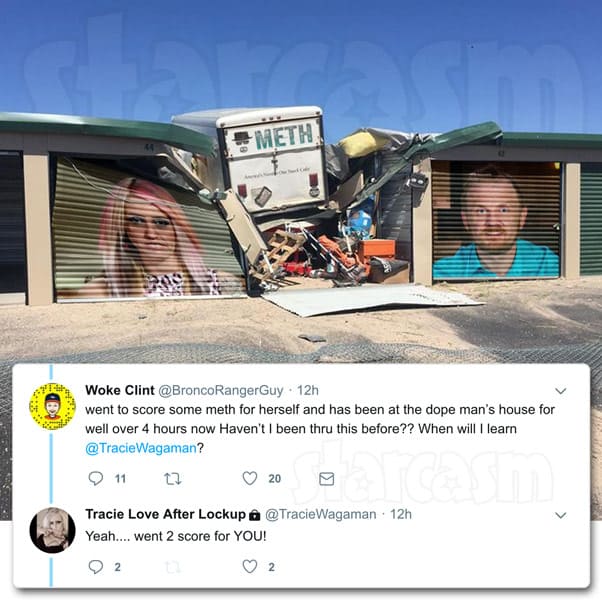 Two weeks after splitting up and getting back together because of fame-hungry women sliding into Clint’s DMs, Love After Lockup super couple Clint Brady and Tracie Wagaman are apparently back on the outs. The latest break up once again played out on Twitter as Clint and his Goddess accuse each other of drug use.

The first indication that there was trouble in paradise (aka Hobbs, New Mexico) was a series of exasperated tweets by Clint after Tracie allegedly went out to buy meth and didn’t return for hours. “I keep asking myself why I keep crying over @TracieWagaman when there are well beyond 165,000,000 women on earth 😢,” Clint tweeted.

[Being a real deal journalist, I though I would fact check Clint’s number. He is technically correct in that there are “well beyond” 165 million women on Earth. There are actually more than 2.5 billion women aged 20 and over on Earth. Perhaps Clint should consider hopping Sharp Productions franchises by dating internationally and landing a spot on Before the 90 Days? I know at least one woman in the Ukraine who would be happy to accept his advances, including cash advances!]

Getting back to Clint’s Twitter outburst, he continued by sharing specifics about what happened that caused him to doubt his undying love for his Goddess. “Went to score some meth for herself and has been at the dope man’s house for well over 4 hours now,” he wrote. “Haven’t I been thru this before?? When will I learn @TracieWagaman?”

Clint concluded his lamentation by suggesting this incident was the final last straw. “I used to believe that I was @TracieWagaman’s top & #1 priority, but I was proven otherwise for the final time tonight.”

Tracie responded to Clint’s accusations by turning the tables on him. “Yeah…. went 2 score for YOU!” she tweeted.

CLINT: LOL I’d LOVE to take a drug test now and prove u (and everybody else) otherwise 😉

CLINT: LOL nice pic u have of us on here. Anyhoo, yeah I did f**k up 2 nights ago, but I’ve not done ANY since then and I barely even did enough for it to probably not show up on a test. At least I’m making an honest effort to stop using hardcore drugs. Those 2 lines of cocaine I did…

CLINT: And that 1/2 of a line I snorted wasn’t enough to get me off. Other than those 2 little mistakes I did, I’ve been clean for 10 days now. How long have u been clean now?

CLINT: Oh and also, let’s point out how much of a gambling problem u have and why u go or sneak off to the casino or game rooms behind my back so often? 🤔

So, Clint has only been clean for ten days, except for two lines of cocaine and that half of a line he snorted two days ago — which wasn’t even enough to get him high. That sounds like some terrible sober bragging to me!

One of Clint’s followers responded to his initial string of tweets by pointing out “Pu**y ain’t worth all that!!” Clint replied with an “Agreed” animated gif. Tracie begged to differ as she chimed in: “That’s bc u haven’t had mine ….”

In addition to the tweets, Clint also removed his Twitter profile photo of himself and Tracie and replaced it with his Snapchat profile image of just himself.

Will this break up be for good? Given the duo’s history, I think we should give it a week before declaring that True Love is officially dead.

UPDATE – Well, it took WAY less than a week! Less than 48 hours after this post was published, Tracie shared a gllery of images with Clint on Instagram along with the following caption: “Despite our shortcomings, we are still together & trying to work things out. #weallmakestupidmistakes #weallmakepoorchoices #forgiving&secondchances”

Tracie also clarified in the comments section that she was only at her meth dealer’s place for meth — not sex:

COMMENT: Didn’t you just bang the meth dealer?? He is a very forgiving man😍

TRACIE: Who tf said I banged the dealer? Is there a rule that says if you’re at somebody’s house for so many hours that u have to bang them? No M******… that’s only in ur fantasy world! Like trying to get me & B***** in ur hot tub…. sorry, it ain’t happening!

On a lighter note, Clint and Tracie NAILED Halloween by dressing up as America’s First couple: Donald Trump and Stormy Daniels! 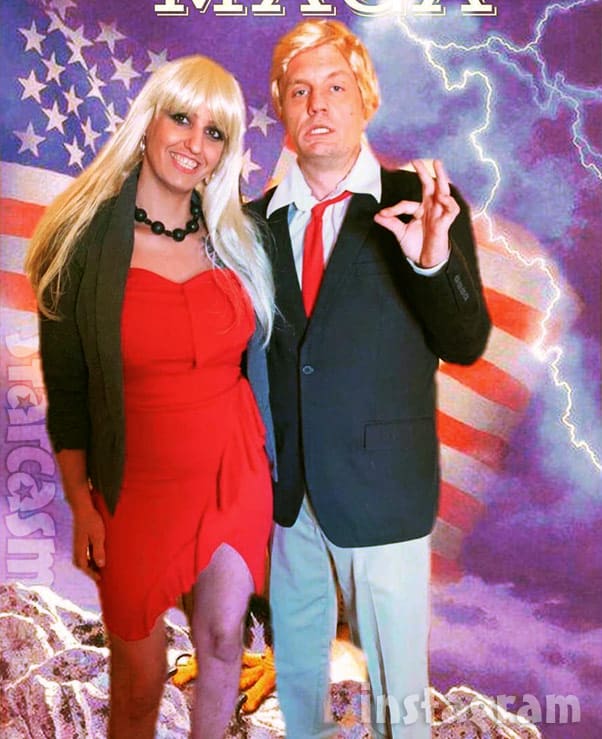 One of Tracie’s followers warned her in the comments section that being political could result in losing half of her fans. Tracie seemed unconcerned.

“Hey I just love Stormy! She’s hot……” Tracie replied. “I’m just in a Halloween costume I am Not even voting! I can’t help who follows me or who unfollows me.” In another comment she clarified her political stance further: “I don’t much care for Trump or any president of that matter it’s just all in fun guys… No harm or pun intended.”

I assume that Clint and Tracie are filming for another season of Love After Lockup: Life After Lockup, but that has not been confirmed. Of course, we will continue to keep an eye on the couple and will update if there are any major developments such as arrests, vehicular thefts, or storage unit annihilations.