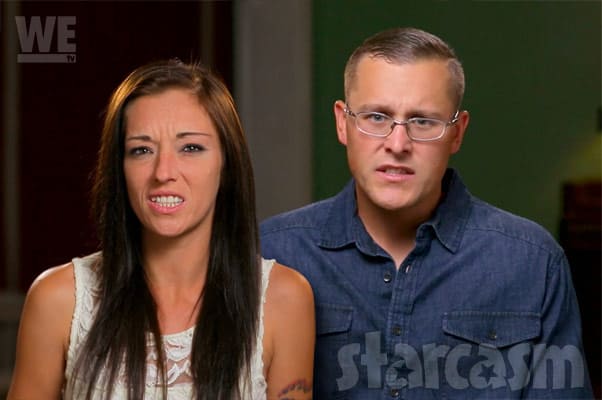 On the current season of Love After Lockup, tension are beginning to rise between Cheryl and her bank robbin’ beau Josh as they both realize that relationships on the “outside” can be a bit more tricky. It seems the increasing animosity between the jailbird lovers did not die down after the WE tv cameras stopped rolling. As a matter of fact, they have escalated. A LOT!

As we previously revealed, Cheryl and Josh are no longer together. The two have been pretty good sports about honoring their NDAs and not talking about their break up on social media, but a recent interaction between the two on Facebook makes it very simple to read between the lines.

The whole thing started innocently enough as Cheryl posted about Josh’s prison release party with his family that was featured on Friday night’s episode. “She for real baked a cake!!!” Cheryl wrote in reference to Josh’s mom Tina making him a cake for the party. “I’m done,” she added, along with this string of three emoji: ??? 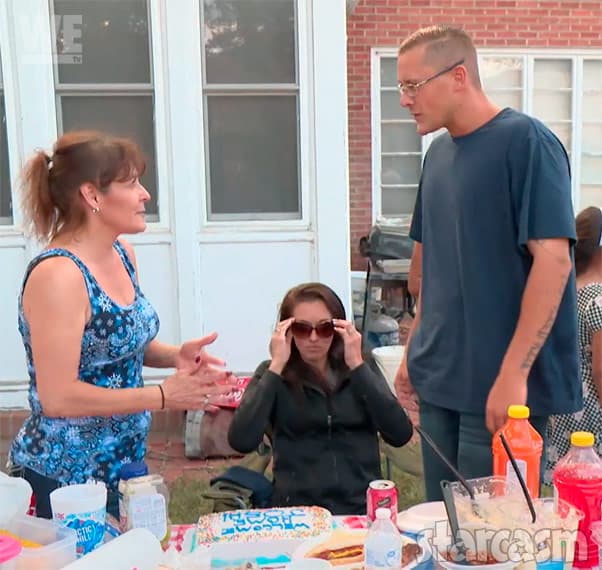 In the comments, Cheryl explained why she asked Josh to leave the party to get her tire fixed. “The point was the car needed fixed. He said that if we drove all the way there that he would get it fixed.. We got there and he turned into an a**hole.” Cheryl then called out Josh’s mom. “And IDGAF what anyone thinks.. Tina’s a b*tch!”

Cheryl later make some rather unsettling remarks about Josh and Tina:

COMMENT: She’s a jealous a** biiiiiaaatcchhhhhh I was cracking up last night “come here my baby boy” or whatever the hell she said. ???

CHERYL: That b*tch and him are weird. It goes further. Idk why she is so creepy about him. I have for real had bad thoughts about them doing sh*t together. Because of the way she acts (I know it sounds crazy but it’s true). They run off to her room alone together for hours every night. I have to sit in the room or with the kids.

CHERYL: I wasn’t going to say sh*t but they go into her room (just Josh and Tina) for hours every night. I fall asleep alone some nights because he is in there so long.

CHERYL: That’s what I freaking say… They try playing it off like its no big deal.

Cheryl’s comments are a bit confusing because we have been led to believe that she didn’t stay overnight at Tina’s house. However, it is possible that she did eventually stay there prior to the Josh break up.

Also, Cheryl toes the line as far as not spilling the beans on the split. “Are y’all still together!?” one commenter asks. “Sadly,” Cheryl responded.

We've got some #spoilers for #LoveAfterLockup couple Cheryl and Josh! (The serial killer-loving woman who is friends with Tony the Clown and the convicted bank robber.) Are they still together? ? https://t.co/nwg3WrVZU8

Josh got wind of Cheryl’s remarks, and he escalated things VERY QUICKLY in the comments section of Cheryl’s post!

JOSH: Why don’t you tell everyone how your dear old daddy used to drop you off at the strip club then come get you and take all the money you made? And still today that’s all you want to do to make that extra. He can pimp out his daughter and say he’ll respect me as a thief? Okay. And don’t get me started on the brother. This whole inbreed looking family cant say sh*t about my family

JOSH: This Facebook talking sh*t thing isn’t my thing but how long do I got to hear about this trash a** chick talking and making up sh*t about my family? She’s delusional as f**k and a godd**n psycho. She doesn’t even make any f**king sense.

Josh’s comments inspired a brand new response from Cheryl in which she once again brought up the time that Josh and Tina spent alone together. That, in turn, elicited another reply from Josh. I’ve been making some grammatical changes to these Facebook posts up to this point, but I will present these unedited:

CHERYL: He says my family looks imbreed… We dont disapear with our mom in her room for HOURS!! I mean she kicked Kenny out of the house and every night her and him were in there together until late a** at nighg.. Doimg what ever two peopld do alone in a room. With the door locked… JS

CHERYL: It was f**king gross. And had to sit in the room and wait for him to come out. Some nights I went to bed alone because they were in there for so long.

CHERYL: And IDK what happen ?? all I could see was the door and the kids questioning me like I knew what was up ???? we will have to wait and see kiddos. ???

JOSH: You see how lame this chick is. All she does is talk and talk and talk. Making up weird sh*t. If I went and talked with my mom for longer than 3 minutes she would fight me for it because she hates her. Hour? It doesnt even make sence. She wanted to take all her kids and leave them with her brother. A convicted and registered SEX OFFENDER!!

Wow! To continue watching Cheryl and Josh’s relationship implode, be sure to keep tuning in to new episodes of Love After Lockup airing Friday nights at 9/8c on WE tv.