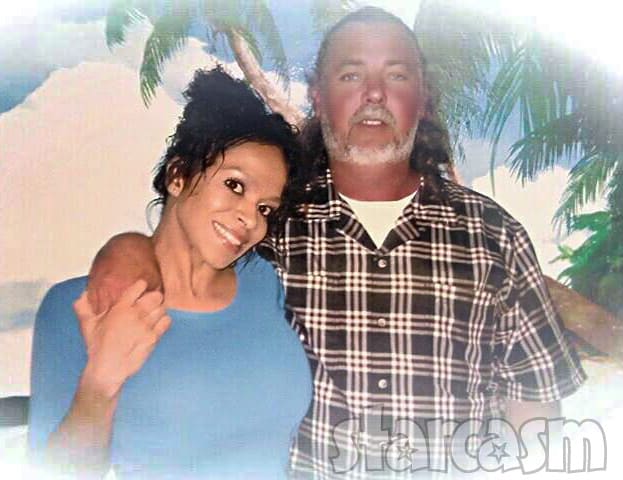 It’s time to follow up on our previous post about Love After Lockup convict Elizabeth “Lizzie” Kommes. We left off with Lizzie being sentenced after her sixth DUI conviction. (Well, it was her fifth when she was arrested, but sixth by the time she was sentenced.) After Lizzie went viral for allegedly attempting to bribe her arresting officers with sex and $10,0000 before posing for a flirtatious mug shot photo, she went back to serving her time at Central California Women’s Facility in Chowchilla, California.

In a surprise to me, probably because my knowledge of female correctional facilities is 80% based on Orange Is the New Black and 19% based on the reality series Women In Prison, Elizabeth apparently has access to social media and a camera. She has posted online often over the last few years, including TONS of sexy photos — some of which are clearly not SFW. (I guess Safe For Prison uses another standard?)

I will share a few of the less revealing ones for you here: 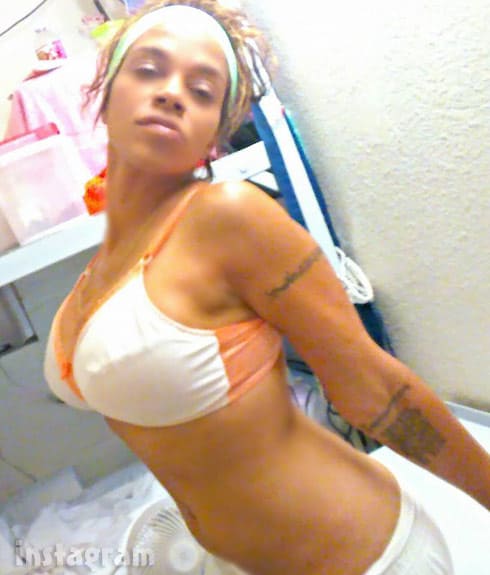 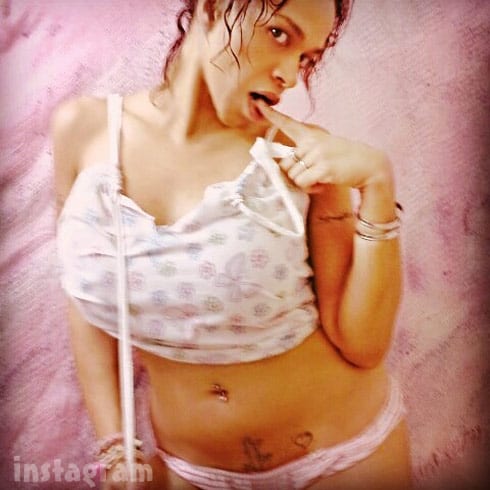 Hmmm… Perhaps when Lizzie gets out she should consider starting a line of prison lingerie. (Wait, that might actually sell!)

In addition to posting the photos on social media, Elizabeth also posted them on numerous prison dating websites, including the one she met her Love After Lockup fiance Scott on. Here is her bio from that website:

Hello Sexy, Yes I am talking to you! Everyone who knows me calls me Lizzie. I’m honest, loving, sweet, loyal and real. I enjoy traveling, football, romantic getaways, sailing on the Open Seas, P.D.A, kissing and making love in the rain on a hot summer night. I am an adventure in itself; you will never be bored of me. I’m a glass-half-full kind of girl, always a smile on my face, I’m beautiful inside and out.

I was small town girl raised in upper Michigan, I like fishing, camping, jet skiing, boating and everything outdoors and in the sun.

I’m looking for someone special; I get out in less than a year. I have no home to go to and I am willing to relocate for my happiness; so please be serious in your response. I do not play games!!

I’m looking for an honest man, to love me, be real, enjoy life with me, hold me at night, when I have nightmares of this place, never give up on me and most important believe in me. Looks do not matter to me; it’s what’s on the inside that counts. I also do not date within my own race; which is black, nor do I write to prisoners; please do not be offended, these are my choices. Please send a phone number & a photo with your first letter to receive a faster response.

I believe that music is the key to ones soul, here’s a peek into mine. Favorite songs: Honky Tonk Women by The Rolling Stones, Was I right, Was I wrong by Lynyrd Skynyrd, Mississippi Queen by Mountain and Israelites by Desmond Dekker. Yes, I love classic rock music. Please allow me a peek into yours. As I said I’m very honest, and I do not lie, with that being said; I need support/generosity until the rest of my time is over. I cannot wait to receive your first letter, and start this connection. I also accept contact visits ❗
Kisses Lizzie

As she mentions in her profile, Lizzie was an exotic dancer prior to being locked up. Her Facebook profile has a list of places she has been an exotic dancer, including the Full Moon Saloon in NYC, the Gold Nugget in Los Angeles, and the PH Day Club in, um, Spread Eagle, Wisconsin.

Lizzie’s “flirty” mug shot photo combined with her racy prison pics have landed her on numerous “sexiest convicts” lists — which I have learned is apparently a thing. It’s not known if it was via one of these lists that Scott first stumbled onto Lizzie. 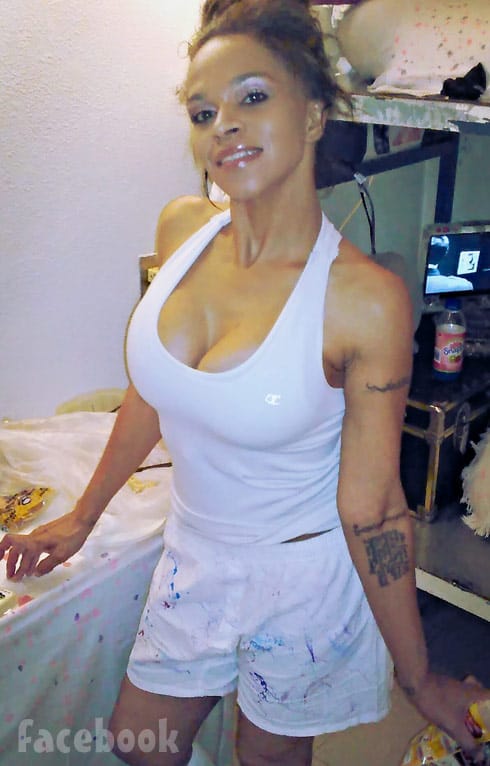 Never one to rest on her barely covered laurels, Elizabeth says that she has earned an associate’s degree while behind bars — and she also seems to have a degree in marketing and fundraising as she has created a handful of fundraising campaigns on websites like GoFundMe. Most of them are purportedly to raise money so that her oldest daughter Jazmyne can go to college. Here is one campaign description from Elizabeth:

In 2009 I got incarcerated to the California State Prison for a DUI w/ GBI. Jazmyne ‘s father passed away when she was just 4 years old. She has been living with my mother for the past 8 years. I do not want her to follow in my footsteps and I want a better life for her so please help me and donate to my daughter Jazmyne, so she can continue her life and become someone better than me. I cannot afford to put my little girl into college. Thank you!
Help spread the word!

That campaign had a $20,000 goal, but no donations at the time at this post. Another of her campaigns did manage to raise $20, $10 of which was donated by Lizzie’s Love After Lockup bae Scott. “For a new start babe,” he wrote when making the donation nearly two years ago. That campaign was more about Elizabeth herself:

Elizabeth has been incarcerated since 2009 and has not seen her daughter for the past seven and a half years. She has so far while in prison; accumulated an associate’s degree, has overcome addiction and started a new group for young women who were abused as children sexually and mentally . Elizabeth has great goals but, needs help upon release from prison. She is looking for donations in order to survive the outside world of prison to keep her freedom. Elizabeth is to be released next year and she needs your help so she can survive and start her new life. Please find it in your heart to donate. Just $5.00 will help this young lady start her new life with her daughter. Your donation will help Elizabeth keep her freedom!

Thanks to Lizzie’s social media posts, we also have a timeline for her relationship with Scott. After communicating for a while, the two became “Facebook Official” in July of 2015. The first time they met in person was in February of 2016. Lizzie posted two photos online and wrote “I had a visit and finally got to meet my, ‘Mr. PERFECT’!!!” One of the photos is at the top of this post, and here is the other: 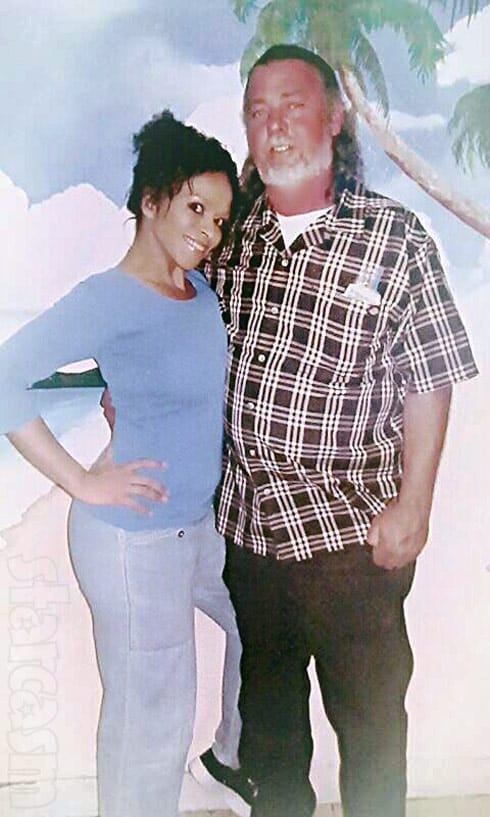 I’m not sure if it is an indication of their current relationship status, but Lizzie now lists herself as single on Facebook. Scott’s profile still indicates he is in a relationship with Lizzie, but it doesn’t appear that he is very active on the site.

Having a camera and taking sexy photos in your prison cell is apparently allowed at Central California Women’s Facility, but something that clearly IS NOT allowed are drugs — and that’s a restriction that Lizzie simply cannot seem to abide by. In some of her numerous social media posts over the last few years, she has documented a few of the instances in which she was caught in possession of drugs, making her time behind bars much more unpleasant. Here are just a couple examples:

May 24, 2016
About 2 months ago I got caught smoking a joint here at wonderful CI- Bullsh!t and now I have to go to court !! yes, I leave tomorrow or the next day probably Thursday it’s sucks major donkey ass but I’m hoping to get time served with a concurrent sentence . so I don’t have to do any more time for a joint (less than a gram) and the sh!t legal outside the premises… how is that even possible??

May 25, 2016
Good morning facebook friends and family, I will miss you guys for the next 2 to 3 weeks; I will be gone. I have my court case for a possession charge ,”of less than a gram “, of marijuana. But the reason why the DA, picked it up… is because, it was done on the inside.? So let’s all pray for concurrent sentence W/ time served..Amen! ?I’ll talk to you all when I get back..

November 19, 2016
Who on snitched me, October 6, ISU officers hit my room @ 8:40 a.m. Got 2 grams of crystal and 0.6 BTH … WHO TOLD THEM?? That is why I’m in here the hole, who needs friends when you got enemies, right. I’m done getting high, done supporting The CIW Heroin Club, my daughter needs my help for college…. And that’s more important then any needle and spoon!

Strangely, all of Lizzie’s social media accounts went completely silent starting in January. I’m not sure if that was a crackdown on the part of the prison, or perhaps it was Love After Lockup producers? (I don’t think they started filming that long ago, but I have next to no confidence in that assumption.)

One thing that was consistent across all of Lizzie’s social media and dating profiles was her expected release date of June, 2017. I would have to assume that if she did get out in June that we would have seen SOMETHING on social media about it! (I do have a lot of confidence in that assumption.)

So, I did some more searching and, lo and behold, I found out that Lizzie is currently in prison in Wisconsin!

According to online records, Lizzie was booked in Columbia County Jail on November 2 before being transferred to Taycheedah Correctional Institution on November 15. Here are her most recent mug shot photos, in which she is still smiling in two of the three: 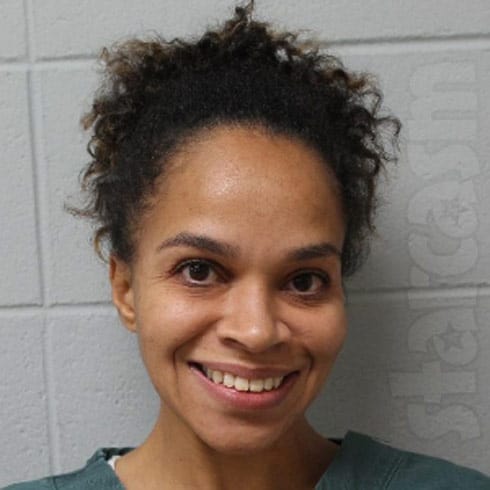 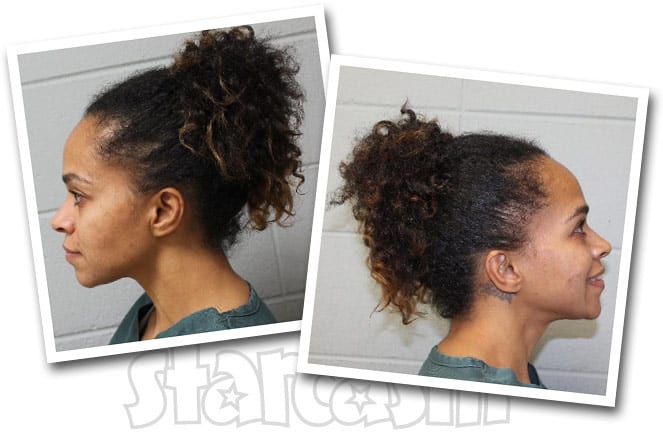 I couldn’t find any new charges listed against Lizzie, but that doesn’t mean there aren’t any. I am going to guess that she wound up serving a longer sentence than anticipated in California due to her terrible behavior, and she was then transferred to Wisconsin to serve additional time — perhaps also because of her bad behavior? That is all complete speculation on my part though.

I suppose we will all find out what happened together as we tune in to Love After Lockup, premiering Friday, January 12 at 10/9c on WE tv! (I CANNOT WAIT!)