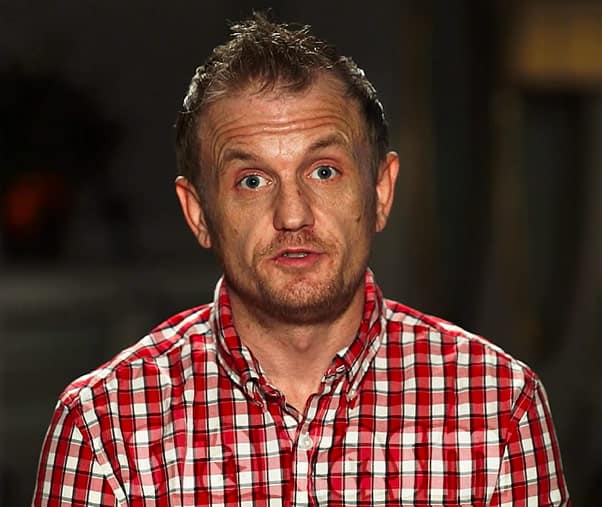 Earlier this year, former Love After Lockup and Life After Lockup star Clint Brady left his Goddess Tracie Wagaman, his dog Blazer, his teenage son, and his parents behind as he tried to make a new start living in Cincinnati, Ohio. Unfortunately for Clint, he wasn’t able to leave everything behind, and that includes his legal troubles.

Clint was pulled over near Cincinnati twice during a two-week span in February. On Valentine’s Day, Clint was stopped for a marked lanes violation. “Criminal indicators were observed and a K-9 was called to the scene,” the police report states. “A probable cause search of the vehicle revealed a small amount of marijuana, THC liquid and a smoking pipe.” Clint was cited on misdemeanor charges of marijuana possession and possession of marijuana drug paraphernalia.

Two weeks later, on February 29, Clint was allegedly texting with Tracie while driving his Chevrolet Camaro on a two-lane road. He crashed into a utility pole, and then careened across the two lanes of traffic before coming to a stop on the other side of the road. Clint told officers on the scene that he did not sustain any injuries, but the same could not be said for his Camaro, which was very badly damaged and undriveable.

Things went from bad to worse for Clint. From the police report:

During contact with [Clint], indicators of drug impairment were observed. His pupils were dilated, his eyes were red, and the odor of burnt marijuana was present on his person. He admitted to smoking marijuana and to having marijuana in his vehicle. He possessed a New Mexico medical marijuana card, but has not obtained his medical marijuana card since moving to Ohio. He was administered field sobriety testing and subsequently arrested for OVI. A probable cause search of his vehicle revealed marijuana and paraphernalia. He was transported to the Batavia Patrol Post and consented to providing a urine sample. The results of [Clint]’s toxicology will be supplemented to this report when they become available.

Despite Tracie stealing his rental car and losing it a couples years before, Clint was eventually able to clear things up and rent a vehicle to drive while the damage to his car was being assessed. However, according to court records, Clint is not legally allowed to drive any vehicle as of May 1!

As a result of his Valentine’s Day drug possession arrest, Clint was required to submit to a drug screen test prior to May 1. As you probably guessed, Clint didn’t take the drug test.

From the court docket entry on May 5:

The defendant did not submit to drug testing for the purpose of avoiding the imposition of a license suspension as per the journal entry of 3-5-20. The license suspension previously ordered, shall be imposed for one year effective 5-1-20.

On a positive note for Clint, it sounds fairly easy to get his license re-instated:

The defendant may at any time during the suspension submit to testing for the purpose of applying for driving privileges while under suspension.

It’s unclear if Clint is aware that his license is now suspended, but I am guessing he doesn’t know. He’s been posting lengthy live videos on Facebook in which he plays video games and dances around his apartment — sometimes appearing to be inebriated.

UPDATE – Clint left a comment on our post on Instagram: “I have my Ohio license, genius and it’s NOT suspended!! I can send u a pic if u need it as PROOF🤦🏼‍♂️ and oh yes…life is GREAT for me NOW 🤩😇🙏🏻” As another commenter pointed out, a photo of his license wouldn’t prove anything because it was printed before it was suspended — obviously.

UPDATE – Clint was quite determined to prove that his license hasn’t been suspended, and he actually posted a photo of it as promised:

Dumbass @starcasmnet tried lying on me and saying that my Ohio license is “suspended” Eat your ❤️ out now!!! My license is NOT suspended. Keep doubting me & spreading more false lies about my happiness 🤦🏼‍♂️ #determination

Clint further explained his case to a commenter:

Clint did manage to get himself together last week and reveals that he went out for a job interview! Here’s his Instagram post and selfie:

Killed it at my interview #needajob 💼 🏨

Clint didn’t share any details about the interview except to claim that he “killed it.” He also didn’t mention what kind of job it was. The caption includes a hospital emoji, so perhaps that’s a clue? It would certainly explain why they were hiring during the current coronavirus pandemic.

Meanwhile, Clint’s other case was recently continued to later this month. The next hearing is scheduled for May 18.

If you’re trying to catch up on Clint and Tracie since their last episode of Love After Lockup: Life After Lockup, here are the headlines from our articles over the past six months:

12-5-2019 – Are Clint & Tracie homeless? Reportedly kicked out by his mom, selling off furniture

Curious what #LoveAfterLockup #LifeAfterLockup's @TracieWagaman & @BroncoRangerGuy have been up to? They broke up, he cheated with a married female fan, Tracie won big $$ at a casino, Clint's sleeping in his car… Get a FULL recap of all the recent drama! https://t.co/y8QF5IGkFl pic.twitter.com/SsCcEaB4Dd

#LoveAfterLockup Clint celebrates 39th birthday by throwing himself a pity party on Facebook, insisting that his mom doesn't love him. Meanwhile, he feels "trapped" in Ohio after signing a 1-yr lease (that his mom co-signed on) FULL RECAP! #LifeAfterLockup https://t.co/MZKmhDD9Ps pic.twitter.com/J0wa6atII1