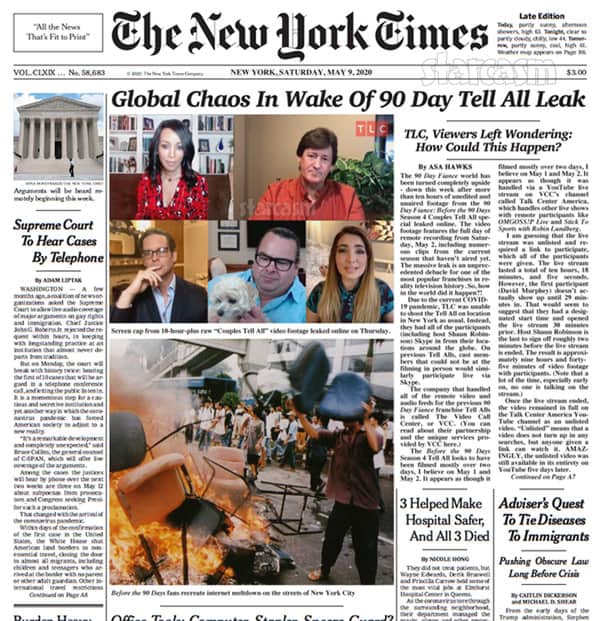 The 90 Day Fiance world has been turned completely upside-down this week after more than ten hours of unedited and unaired footage from the 90 Day Fiance: Before the 90 Days Season 4 Couples Tell All special leaked online on Thursday. The video footage features the full day of remote recording from Saturday, May 2, including numerous clips from the current season that haven’t aired yet. The massive leak is an unprecedented debacle for one of the most popular franchises in reality television history. So, how in the world did it happen?!

Due to the current COVID-19 pandemic, TLC was unable to shoot the Tell All on location in New York as usual. Instead, they had all of the participants (including host Shaun Robinson) Skype in from their locations around the globe. On previous Tell Alls, cast members that could not be at the filming in person would similarly participate live via Skype.

The company that handled all of the remote video and audio feeds for the previous 90 Day Fiance franchise Tell Alls is called The Video Call Center, or VCC. (You can read about their partnership and the unique services provided by VCC here.)

The Before the 90 Days Season 4 Tell All looks to have been filmed mostly over two days, I believe on May 1 and May 2. It appears as though it was handled via a YouTube live stream on VCC’s channel called Talk Center America, which handles other live shows with remote participants like OMGOSS!P Live and Stick To Sports with Robin Lundberg.

I am guessing that the live stream was unlisted and required a link to participate, which all of the participants were given. The live stream lasted a total of ten hours, 18 minutes, and five seconds. However, the first participant (David Murphey) doesn’t actually show up until 29 minutes in. That would seem to suggest that they had a designated start time and opened the live stream 30 minutes prior.

Host Shaun Robinson is the last to sign off, roughly two minutes before the live stream is ended. The result is approximately nine hours and forty-five minutes of video footage with participants. (During some parts of that time, especially early on, no one is talking on the stream.)

Once the live stream ended, the video remained in its entirety on the Talk Center America YouTube channel as an unlisted video. “Unlisted” means that a video does not turn up in any searches, but anyone given a link can watch it. AMAZINGLY, the unlisted video was still available in its entirety on YouTube five days later. That’s when someone from reddit reportedly ran across a link to the video because it was included in a playlist on the YouTube channel of one of the cast members. (I won’t say which cast member.)

As you might imagine, the redditor was a bit shocked! He/she posted the link on reddit on Thursday afternoon as part of a post titled “90 day fiancé tell all! Accidentally available!? TEA.”

The video would be deleted hours later, but some folks had already downloaded it. Once it was deleted, links for others to download the full video began to pop up in the comments of the original reddit post. The video was disseminated among fans and 90 Day Fiance social media accounts fairly quickly, and by Thursday night the video clips and recaps were EVERYWHERE.

So whose fault is it that the Before the 90 Days Tell All leaked? If there was a cast member that added the video link to a public playlist, then certainly he/she bears some of the responsibility. But what blows my mind is that nearly nine hours of unedited and unaired footage from the reunion show of perhaps the single most popular reality show on cable television right now was available for anyone with a link to watch on YouTube for FIVE DAYS after it was recorded!

I am sure the all-remote format created some unique issues for producers, including having access to the raw video and audio for editing purposes. So perhaps the video was left on YouTube for producers and editors to download and/or watch? It just seems crazy to me that they didn’t put the video in some sort of password protected dropbox or something, right? Undoubtedly there are some very highly paid people with TLC and Sharp Entertainment who have been asking similar questions over the past two days.

We recap the HUGE fight between #BabyGirlLisa, #BigEd & Avery from the leaked #90DayFiance #BeforeThe90Days Couples Tell All footage, including some very serious allegations made by Lisa and Big Ed! 😳 (I'm guessing most of this won't make it to TLC.) https://t.co/OdrBGAWFDr pic.twitter.com/10DTZLuB7h

If you are wondering where you can watch the leaked Before the 90 Days Tell All video, I can’t help you. TLC and/or Sharp have been aggressively reporting videos from the Tell All posted online. However, with the cat fully out of the bag, it will be all but impossible to keep the video off the internet. I am guessing there are numerous Facebook groups, etc. that are staying out ahead of the reporting with new links.

It will be interesting to see how producers handle the Tell All after the leak. Sharp is second only to Chik-fil-A when it comes to turning lemons into some great tasting lemonade, and I have a feeling they are using the leak to get some valuable input from fans. Could there be a market for a relatively unedited version of the Couples Tell All? Remember, the leaked video was just day 2! I could see them editing out dead air and other completely uninteresting bits and still having 12-13 hours of footage — without commercials.

I’ve watched most of the leaked video, and I have to admit that I find the raw footage enthralling! Of course, some of that is the psychological impact of watching “leaked” footage that I’m not supposed to see, but I do think there is a large segment of the 90 Day Fiance fan base that would love to watch a relatively unedited version of the Tell All. I’m imagining the regular two-part Tell All being aired on TLC, with the extended version made available on the network’s website. Why not at this point, right?

We've got the most mind-blowing #spoilers yet from the #90DayFiance #BeforeThe90Days Couples Tell All special! And they involve… David and Lana?! This ain't a clickbait tease y'all! You won't be disappointed! 🙀 https://t.co/rnU9sXNt5D pic.twitter.com/RVRoU62uHZ

Before I wrap this post up, I wanted to give a shout out to host Shaun Robinson. She gets quite a bit of criticism from fans for seemingly being too soft and not pressing for the difficult answers viewers want, but it’s important to remember that she doesn’t come up with the questions. Watching the raw footage you can see her taking instructions often via an earpiece, and I think seeing that would temper some of the critics a bit.

I also think critics would soften their stance a bit after watching Shaun go the full nine hours surrounded by screaming adults! After watching for just an hour or so I was already about to lose my mind. I cannot imagine what it was like for her trying to deal with that! And this was the second day of it for her! Oof.

The Tell All leak also has some viewers confused as to when it will air. There is a misconception that the leaked videos are actually previews and that the Tell All is airing this week or next. That is not the case. According to online TV listings, there are at least two more regular episodes to go this season. The description for the May 17 episode titled “The Pleasure Principal” does sound like it could be the finale:

Of course, “Darcey rethinks her priorities” and “Yolanda wants answers from Williams” describes pretty much every episode they’ve ever been in.

Here are some links to our coverage of the Before the 90 Days Tell All leak: