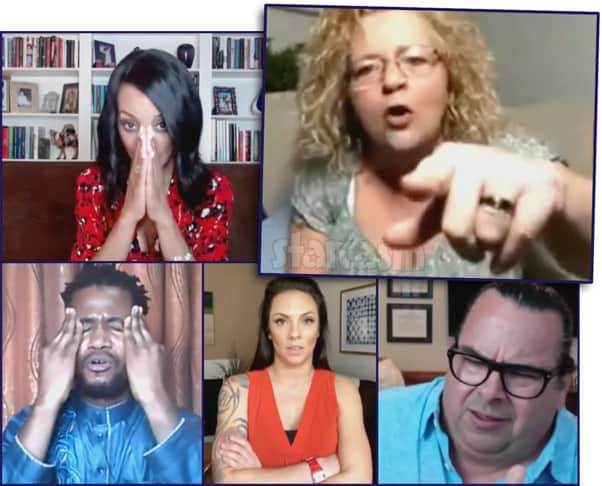 In case you somehow missed the news, half of the 90 Day Fiance: Before the 90 Days Couples Tell All special leaked online late last week. The ten-plus-hour raw video was from day two of filming and included the full unedited segments featuring David and Lana, Yolanda and Williams, and Lisa and Usman. Other friends, family members, and cast members joined in at various times to offer up their opinions and reactions as well.

We previously shared a recap of the portion of “Baby Girl” Lisa Hamme and Usman “Sojaboy” Umar’s segment in which they discussed the possibility of Usman marrying additional wives, which he previously stated in an interview is his intention if Lisa cannot give him a child. I feel certain that some of the footage with Lisa and Usman discussing additional wives will make it to the final version of the Tell All when it airs. The same cannot be said for the segments with Lisa and Usman that also included their co-stars Avery Warner and “Big Ed” Brown!

While still speaking with just Lisa and Usman in the leaked footage, Tell All host Shaun Robinson introduces a clip from the season that will be on an upcoming episode. In the clip, Lisa has a conversation with Usman and his brothers on the night before their wedding. Usman and his brothers try to tell Lisa that her behavior and expectations are a bit over the top, and she storms off.

When the clip ends, we see that Before the 90 Days stars Avery Warner and Big Ed Brown have joined the live stream.

Shaun asks Avery about the clip they just watched, but Avery says she wasn’t able to follow it because the others in the stream were talking to her the entire time. She then offers up her take on Lisa and Usman.

“I’m still trying to see the love,” Avery says. “Where’s the love between you guys? Because everything that I’m seeing is just yelling at each other, trying to assert [your] voice over the other person, your position over that person’s position. So I’m just sitting here, like, what drew you guys together? Usman, why do you love Lisa?” Avery goes on to say that their relationship has seemed like a business interaction with the end goal of getting married. “I don’t see any love really.”

Lisa says something that I can’t make out because Big Ed is also talking. She then tells Avery and Big Ed: “One, two, you guys should see how you are projected!”

Big Ed then interjects his thoughts on the couple. He begins by complimenting Usman for being so calm and respectful, before moving on to Baby Girl Lisa:

Lisa, at first, with all due respect, you’re like a bull in a china shop, OK? At first I thought you were the definition of a narcissist, but I’m, like, “No way!” You’re like the definition of — you’re delusional! Your thoughts are contradicted by reality! You live your life in social media. That’s how you get all your information, and then you throw it at people. And, I mean, this guy, I don’t know what else he could’ve done for you. He showed you so much much respect. And even his friends — you knew you were going —

Lisa manages to remain silent for what seems like an eternity for her, but she eventually interrupts Big Ed and informs him and Avery both that they had better not be joining their Tell All segment to disrespect her. She starts to tell them both what she will do if that’s the case when Sojaboy temporarily diffuses the situation by singing the chorus from his song “I Love You.” Everybody chuckles.

However, the fire between Big Ed, Avery and Baby Girl Lisa was immediately re-ignited as the three of them took over the live stream.

Here is a transcript of some of their conversation:

BIG ED: It’s not about disrespect, I’m just being honest with you.

AVERY: Lisa, when you feel like you’re being attacked, you shut down.

#90DayFiance #BeforeThe90Days @OfficialSojaboy tells @aylipservice that part of the reason he stayed with #BabyGirlLisa was because she was suicidal. Plus, he says he plans to have additional wives so that he can have children. Full interview & recap! https://t.co/vNoMQilOJp

BIG ED: Lisa, you run away like a 51-year-old adolescent. You run away from conversations.

AVERY: When things are wrong in your guys’ relationship, the entire world knows about it. Like, the entire internet knows about it — everyone knows when there’s a problem, and I don’t think Usman’s doing that to you whatsoever.

LISA: Oh yes he has Avery, so shut up and listen. He has gone on social media, just like you got on Ed’s live drunk out of your godd**n mind and made an ass out of yourself.

LISA: The whole world seen that!

LISA: You were drunk on Ed’s live. EVERYBODY’S talking about that!

AVERY: How did I make an ass out of myself?

LISA: Everybody was laughing at you because you were so drunk, Avery. You were talking sh*t so bad.

BIG ED: Lisa! Lisa, is that the show? Is the internet the show? Where is your head? You are delusional!

#90DayFiance #BeforeThe90Days Avery Warner explains why her oldest daughter Scarlett is not on the show & addresses "heinous" allegations made against her by social media accounts she says were created by her ex-husband. Plus, info from WA court records. https://t.co/lyIBheIOxl

LISA: [Tries to talk but Big Ed keeps talking over her.]

AVERY: Hey Usman! Not all American women are like that!

LISA: No! Shut the f**k up! I’m talking! I’m talking! When you talked to Rose, you told Rose her f**king breath stinks, shave your legs — when you’re coming in with your f**king greased up hair looking like a f**king [bum yourself?]. Then you say she’s f**king taking your money! You said she took your money!

It becomes total chaos at this point with Lisa and Big Ed yelling over top of one another.

More #spoilers from the #90DayFiance #BeforeThe90Days Couples Tell All recorded remotely over the weekend! #BabyGirlLisa says she is "OK" with #Sojaboy Usman having more wives if she can't provide a child! 🙀 #SeekingSisterWife https://t.co/jFwyNo7pXG pic.twitter.com/TqJzPXL088

Once again, Usman comes in as the voice of reason. “Ed, can you do me a favor?” he asks, before letting Ed know that he is begging him to calm down. “Why are you raising your voice up?” he asks.

Lisa throws gas on the fire by seemingly referencing the accusations of sexual harassment recently made against Big Ed. “You’re gonna let this f**king pervert whose got charges — charges for sexual harrassment and sexual grooming — you’re gonna let this idiot come at me with the f**king charges he’s got? OK, this f**king pervert has been grooming women. The women are coming out of the woodwork because Ed has molested them, he’s groomed them. And god only knows what the f**k else he did to them!” 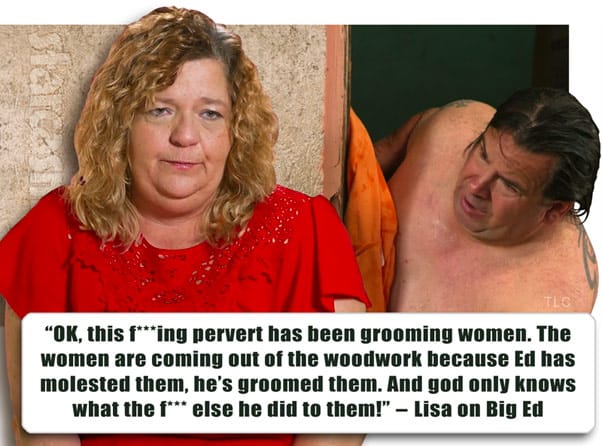 Big Ed once against calls Lisa delusional and says that the accusations were just something else she read online.

Lisa moves on to comments that Rose reportedly made about Big Ed on day one of the Tell All taping. “What the f**k did Rose say last night? I do recall Rose saying that you used her for the show. That’s the only reason you came to her, is you wanted the f**king publicity! You never loved that woman.”

Big Ed continues on about Lisa being delusional and believing everything she reads on the internet. Avery also chimed in with something about people coming to Lisa saying that Avery sold stories to them.

At this point, Lisa is DONE with her co-stars as she brings the already thin fourth wall crashing down by mentioning someone named Harry — who I assume is a producer listening in.

“Ed and Avery, you guys are really fake on here right now,” Lisa begins. “So, Harry, if you hear my f**king voice, remove these two right now! These two are the most fake f**king [??] on the show!” There’s another outburst with multiple people talking, but I can make out Lisa saying: “Thing 1 and Thing 2 are the most fake f**ks. Get ’em off now!”

To find out how much of the “conversation” between Baby Girl Lisa, Avery and Big Ed is included in the final edit of the 90 Day Fiance: Before the 90 Days Season 4 Tell All, be sure to tune in when it airs! It appears as though there are two more episodes this season, including tonight’s, which will then be followed by the Tell All.

We will continue to share some recaps from the unedited leaked footage, so stay tuned! Until then, here are some of our previous posts with Tell All leaks and spoilers:

More than 10 hours of raw footage from the #90DayFiance #BeforeThe90Days Couples Tell All special leaked online on Thursday. Where did people watch it? And how in the world did it happen?! Get the story on one of the biggest debacles in reality TV history! https://t.co/WmllIJ05Ii pic.twitter.com/mdC1XYBdWZ

Information is already leaking from the #90DayFiance #BeforeThe90Days #CouplesTellAll special filmed remotely over the weekend! Get the scoop on Geoffrey and Varya! https://t.co/YH7bIz2PQS

BEFORE THE 90 DAYS What is Stephanie’s life threatening illness? Is her relationship with Erika real?