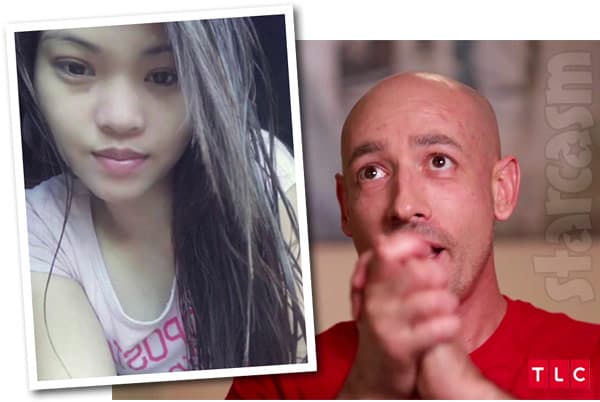 Nearly a month into the inaugural season of TLC’s 90 Day Fiancé spin-off series Before the 90 Days, viewers will FINALLY get to meet the last couple looking for international love. In a series of preview clips for the upcoming episode, we are introduced to 37-year-old Larry from Pinellas Park, Florida and 24-year-old Jenny from Urdaneta City, Philippines. The facepalm-worthy clips have more red flags than a Chinese National Day parade, so I’m thinking that the duo’s late entry may be due to their relationship crashing and burning prior to actually meeting.

[NOTE – TLC’s embeds are a little quirky and sometimes start playing automatically. If you’re hearing multiple videos — or ads — going at the same time, you will need to scroll down and hit “pause” or stop. I spent a good while trying to figure out a fix, but my limited tech skillz were not up to the task.]

First off, let’s meet Larry during a time that he still appears to be quite optimistic about potentially marrying Jenny. As a little background, Larry is a never married father of two teenage boys who manages a McDonald’s restaurant. He’s seems to be VERY high energy, and sort of reminds me of Howie Mandel, if he had gone into the fast food industry instead of comedy:

Larry reveals that his two boys are from prior relationships with two different women that “went sour because they didn’t want to commit.” The only woman in his life now is his Chihuahua Rose.

“This time I’m looking for something real, something forever,” Larry says. “And I think I might have found that someone.” We are introduced to Jenny as she and Larry exchange texts. Larry goes on to share his positive outlook on their future before preparing for his flight to The Philippines — the first time he will be leaving the United States.

So far so good. No major red flags — yet.

Next up we have the “Meet Larry & Jenny” extended intro clip, and here is where the unfurling begins:

Larry reveals he is a manager at a McDonald’s and the current ages of his two sons are 14 and 18. He says that his first serious relationship (and I assume his first son) was with his high school sweetheart, but “unfortunately, that ended in disaster.” (I’ve been covering dating reality shows long enough to know that someone saying a previous relationship ended in “disaster” is usually an indication that there was a restraining order, a mug shot, or both.) Larry says his dating life in the US has been “not good.”

We see a very brief selfie video of Jenny before we are introduced to Larry’s cousin Buster, who is married to a woman from the Philippines that he met online. “She is such a good woman,” Larry says of Miss Buster, “she cooks, she cleans, she works full time — I just couldn’t believe that!” ??? [I might be crazy, but I think there is a split second where Buster is actually in the same room as Larry — just over his right shoulder? You can see it in the quote graphic below, behind the words.]

Larry says he posted his photo and a one-sentence description on FilipinoCupid.com, and within 24 hours he received 217 emails. He spoke with 15 “girls” on Skype, with Jenny being number 15.

We once again get to see Jenny at this point, and she seems just a tad less enthusiastic than Larry. Of course, Larry seems like quite the enthusiastic guy regardless.

Speaking of Larry’s enthusiasm, it goes up a couple notches as he describes his first conversation with Jenny. “She said to me: ‘I want to cook for you, I want to clean for you, I will never cheat on you, I will never get divorced, I’m a devout Catholic, I work full time…’ Where are you gonna hear a girl say that kind of stuff?” Well, Larry, I’m guessing in skype conversations with young women from the Philippines that you just met on an international dating site? “I knew right away that this was the one that I was going to go for,” Larry continues. 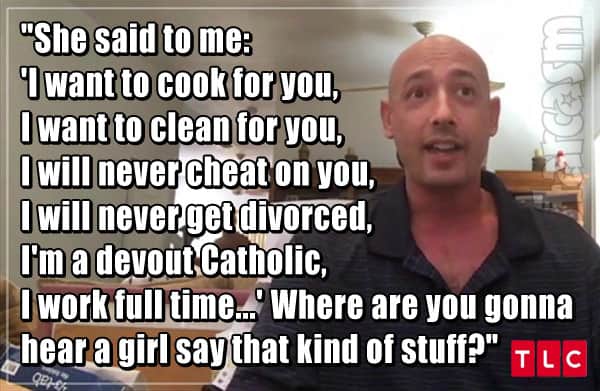 He says they talk all the time, all day, every day via text or Skype and that the relationship grew rapidly. “It’s crazy! It was after, like, three weeks she started saying ‘I love you,’ ‘You’re my husband,’ introducing me as ‘uncle’ to her nieces and nephews…”

There is a slight chink in Larry’s optimism armor, however. “I don’t know if I’m the only American guy she’s seeing,” he admits. “Because she has over 700 friends on Facebook, and a lot of ’em are American guys.”

We then see Jenny admitting that she does have American ex boyfriends. “Larry’s different from them,” she argues.

Things get a little weird at this point. “The biggest problem we had,” says Larry, “is when my cousin hacked her account and went into her messages.” Buster’s wife then reveals: “I went to her Facebook, and she has a lot of things there. She was talking to a lot of guys — all guys,” she says.

Woke cousin Buster knows the deal. “I think she has back ups,” he says.” Miss Buster agrees. They also point out that Jenny never deleted her online dating profile. (More on that in a minute). 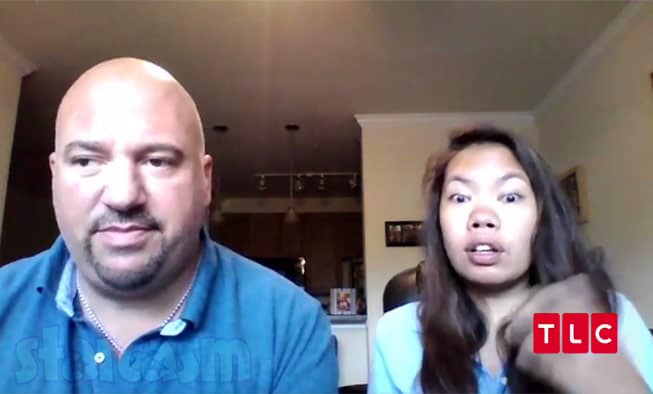 Larry confesses that Buster found a message where a guy actually met Jenny in the Philippines. “There’s a possibility she’s seeing another American guy,” he concedes. “So we’ll just have to see about that when I go there.” Woke Buster concludes: “I think it’s a big mistake. Larry is her ticket out, let’s put it like that.”

Larry says Jenny lives nine hours from Manila in a place that he can’t even pronounce. “This is what’s weird, though,” he explains, “she says: ‘Please meet my family! Please meet my family!’ But my cousin said ‘Don’t you dare! Because they’ll abduct you, they’ll take your money and kill you! So just stay at the hotel.'” (Kinda reminds me of Before the 90 Days co-stars Paul and Karine.) “I looked at pictures through Google, and I’m scared, to be honest with you,” Larry says. “I cannot go in the mountains — I’ll disappear. No one will ever see me again. We’ll see how it goes. I’m going to have to go to the Philippines and see how I feel — if I feel comfortable, if I feel safe, if I can get a driver to get out there. I just can’t make a rash decision.” We definitely don’t want you making any rash decisions, Larry.

Jenny then states very clearly “I want Larry to propose to me.” So direct! Where are you gonna hear a girl say that kind of stuff?

Ah, but Larry is going to think this over and make an educ– NOPE! “I have no idea how I am going to propose to Jenny,” says Larry, “but I know I’m going to propose to her. So I’m just going to let it flow naturally. However it happens, happens.” There’s no possibility for a rash decision if the decision has already been made, right?

Larry then reveals that his relationship with Jenny is a complete secret from his family, other than woke cousin Buster, obviously. “I don’t tell nobody anything,” Larry boasts. “I keep everything a secret. It’s not maybe a good idea, but it’s my idea, and that’s how I cope with this right now.” Forget managing McDonald’s — Larry needs to get a trademark on his idea to keep everything a secret!

Jenny then says, seemingly without any excitement or nervousness: “I feel so excited, nervous. I know that he is already the one for me.”

Larry wraps up the clip with some straight-forward honesty. “If this didn’t work out, my heart would be broken and I would probably cry.”

OK, now on to the clip that really had me thinking Larry’s appearance on Before the 90 Days might be a short one and he might wind up heart broken and crying without ever getting on the plane…

This post is already WAAYYYY too long, so I will briefly summarize this last clip by saying that Larry discovers Jenny has accessed her FilipinoCupid.com dating profile within the past week so he calls her in the middle of the night (for her). She explains that the account access was accidental and due to her phone, adding that he will completely understand once he gets to the Philippines and can see her phone. Larry pauses for a moment, to avoid making a rash decision. “OK, no problem,” he says. “I’ll see you in two days.”

I did a little sleuthing, and although I couldn’t find Jenny’s Filipino Cupid account, she does have an active account with the same profile photo on another international dating site: 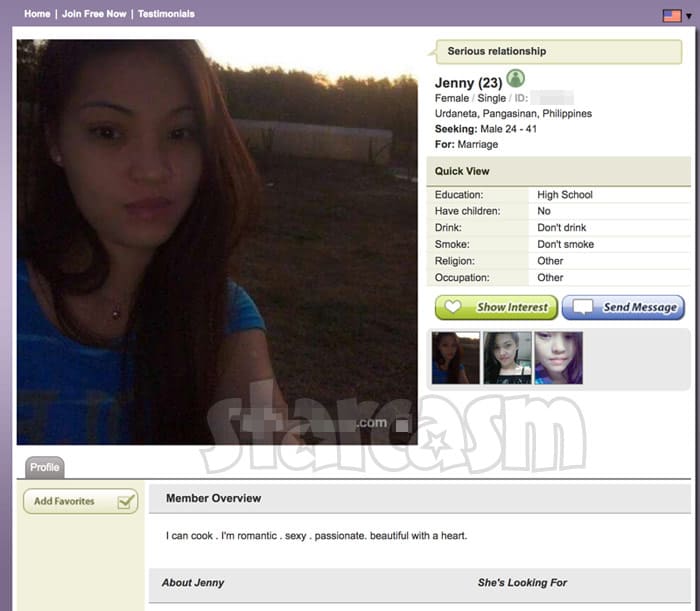 For her “overview” Jenny wrote “I can cook . I’m romantic . sexy . passionate. beautiful with a heart.” She is seeking a man between the ages of 24 and 41 who fits these requirements: “Kind . respect . simple . funny . serious.”

Be sure to see how Larry and Jenny’s story plays out when they debut on 90 Day Fiance: Before the 90 Days this Sunday at 9/8c on TLC!