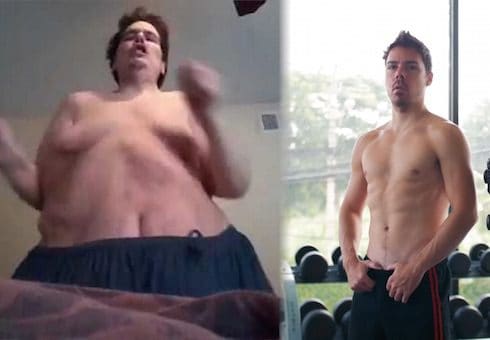 Controversial My 600 Lb Life cast member Steven Assanti may have faded from the public eye since his surprise marriage to Stephanie Sanger last year, but that doesn’t mean he’s not still raising eyebrows. The latest news involving him is a Steven Assanti weight loss video that has some fans of the show in complete disbelief — that is, the ones who only saw the thumbnail, or who didn’t watch the whole thing.

Entitled “Steven Assanti Now: Take That Haters! My 600 Lb Life Update,” the clip first appeared on YouTube in early December. The thumbnail is the photo above. And because the title does some solid & straightforward SEO work, the clip soon worked its way into the algorithms of many a skeptical My 600 Lb Life viewer. It’s coming up on two million total views, but based on a survey of the comments section and reactions elsewhere, many of those viewers got sucked in by what they thought had to be a Steven Assanti weight loss hoax. The truth is far more entertaining.

The first few minutes of the video feature a man who looks roughly like Steven Assanti describing how he lost 700 pounds in three years on the Monkey Strength weight loss program. In a nutshell, Monkey Strength involves basic strength exercises and eating only once per day. But ‘Steven’ uses such a dry and deliberately silly delivery that it’s as hard not to laugh at him as it can be to give the real Steven Assanti the benefit of the doubt.

“So once I got on the Monkey Strength program and started eating one meal a day,” ‘Steven’ explains, “it took me three years to lose the 700 pounds (I’m only 34 pounds now.)” (Yes, he really does say that in parentheses.)

Then, without skipping a beat, ‘Steven’ continues with a wonderful direct contradiction of what he just said. “I’m a hundred and fifty pounds of molten lava, now. I’m a thunder god,” ‘Steven’ narrates, as the before-and-after photo at the top of this article fills the screen. On the left, it’s the actual Steven Assanti dancing in one of his old Facebook videos; on the right, it’s the narrator — who, truth be told, looks reasonably close to a chiseled thunder god.

“When I’m naked, in front of a mirror,” ‘Steven’ concludes, “I hear thunder erupting — every time.”

Then, after a quick fade-out at the four-minute mark, ‘Steven’ returns, and pulls the curtain back. “Okay, I may not actually *be* Steven Assanti,” he says. “I just look like him, a little bit? Whatever. Whatever, it’s a parody video — you didn’t see it coming.”

It turns out that the man behind the Steven Assanti weight loss “hoax” video is actually named Kasey. He runs the Vegetable Police YouTube channel, and he’s both tired of and amused by the people who rather frequently ask him if he’s “from that 600 Pound show.”

“‘You look like him,’ Kasey says, describing what people tell him when they make the comparison. “‘Hey, look. This is what you would look like if you were fat. Ha-ha, look at that.’ So, I’m running with it.”

And it further turns out that everything in the absurdly named Monkey Strength program is real. It’s what Kasey does to stay in great shape, and, as he puts it, “it’s exactly what I would do if I were fat.”

As for the genuine Steven Assanti weight loss? It’s difficult to say. Steven no longer has any social media accounts. When we last spoke with him, it was through his wife — and it eventually became clear that Steven was the one doing at least some of the typing, if not all of it. Stephanie Sanger’s name in her Facebook URL has changed from “stephaniesanger” to “stephanieassanti” to “stephanie.stevenmylove” over the past few months. And neither she nor Steven have shared any new photos since our last update on the couple.

On the other hand, if you enjoyed the parody video above, you’ll find more silly and helpful health-related videos on the Vegetable Police YouTube channel.