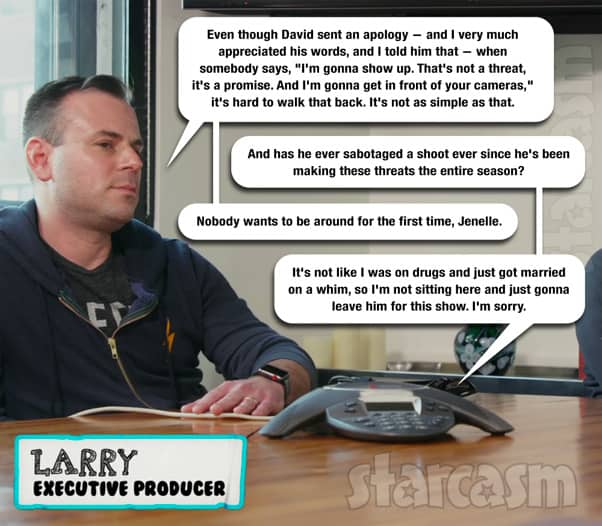 MTV made a bold change in 2015 when they broke down the fourth wall for Teen Mom OG and Teen Mom 2. The change meant that the moms’ stories would include the fact that they are international reality stars with production teams in their houses, GoPros plastered all over their cars, and everything they say and do being scrutinized by the public and the media.

The fourth wall coming down, combined with the increasingly disturbing actions and comments by Jenelle Eason’s husband David Eason, resulted in a remarkable and unprecedented scene during Monday night’s episode of Teen Mom 2.

I feel I should set the stage , just in case you haven’t been keeping up with the David and Jenelle stories over the past year and a half. David Eason was fired from Teen Mom 2 after a series of homophobic and transphobic tweets in February of 2018. After his firing, David essentially went off the rails.

Jenelle’s husband shaved his head and grew out his beard before later posting numerous photos and videos showing off his arsenal of weapons and ammunition. He posted one video clip firing a weapon, and he criticized President Donald Trump for considering banning bump stocks. The combination of David’s unhinged appearance and mannerisms, his stockpile of weapons, and his comment that could be perceived as a veiled threat against The President of the United States led to The Secret Service sending an official to The Land.

David’s unstable behavior continued, including an incident in which Jenelle called 911 and told the operator that David assaulted her and nearly broke her collarbone. There was also a video that he uploaded to YouTube in which he forcibly towed another man’s legally parked truck in downtown Wilmington because it was too close to his boat trailer. David is still facing criminal charges from that incident. (The incident from just over two weeks ago, in which David brutally beat and then shot and killed the couple’s French bulldog Nugget after it reportedly snapped at their daughter Ensley, occurred after the scene from Monday night’s episode was filmed.)

Given David’s words and actions, Teen Mom 2 production made the decision to not only refuse to film David for the show, but also to refuse to film Jenelle if David was anywhere nearby. As you might imagine, this caused some difficulties as production was forced to do a lot of filming “on location” at restaurants, parks, yoga studios, etc.

But, during an episode of Teen Mom 2, MTV shared this update:

A few weeks ago, David texted producers that he would show up during any upcoming Jenelle shoots and force production to shut down.

Because of this, MTV crews are no longer able to travel to North Carolina to film with Jenelle.

As a result, MTV was forced to try to set up out-of-state trips for Jenelle just so they could film scenes without being worried that David would show up. (I really can’t believe how crazy this story is.)

As you might have guessed, David did not like Jenelle traveling all the time — especially if he couldn’t go.

That leads up to the scene from Monday night’s episode in which Teen Mom 2 producers Larry, Morgan, Kristen, and Annalisa are all seated in a room together in New York City for a conference call with Jenelle in hopes of figuring out a solution.

Thankfully, MTV has provided the scene as a separate clip. Here’s the scene, followed by a full recap of the dialogue from everyone involved:

David apologized for the texts he sent threatening to shut down production.

Following this, Jenelle communicated her concerns about traveling to the producers. They agreed to discuss.

LARRY: So we wanted to connect about your issues with traveling.

LARRY: [Over top of Jenelle]: Terrible, I know. You’re right in the middle.

JENELLE: They tell me no to everything, and there’s nothing I can do about it.

KRISTEN [Interupts Jenelle]: I think that our hands are really tied after that text message, Jenelle. I think the text message really just put this over the edge. Like, a threat in writing is really difficult to walk back from.

JENELLE: And he also apologized for it.

LARRY: Even though David sent an apology — and I very much appreciated his words, and I told him that — when somebody says, “I’m gonna show up. That’s not a threat, it’s a promise. And I’m gonna get in front of your cameras,” it’s hard to walk that back. It’s not as simple as that.

JENELLE: And has he ever sabotaged a shoot ever since he’s been making these threats the entire season?

LARRY: Nobody wants to be around for the first time, Jenelle.

JENELLE: It’s not like I was on drugs and just got married on a whim, so I’m not sitting here and just gonna leave him for this show. I’m sorry. 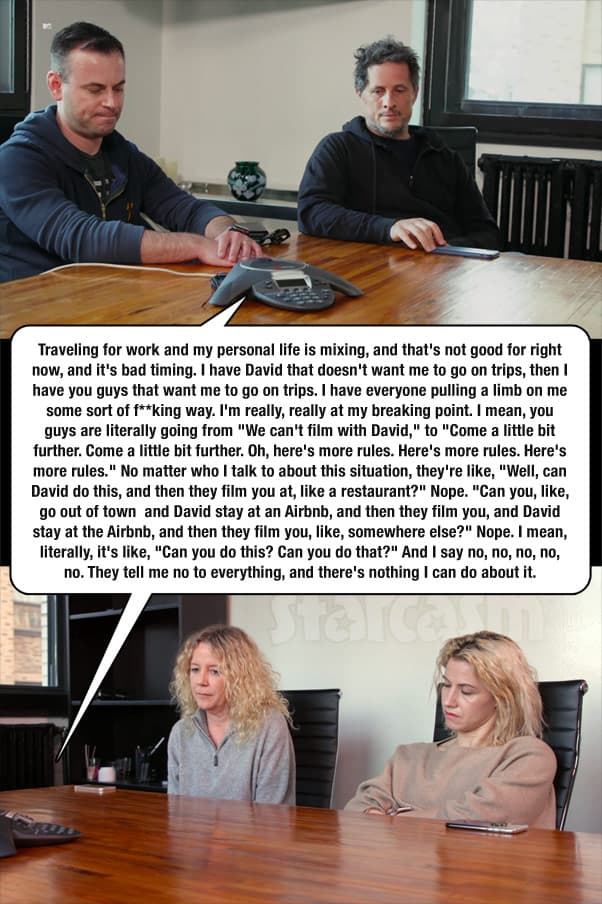 MORGAN: None of us want to force you to choose between David and the show, but I’m hearing you say it’s really just about you’re not willing to get on a plane and travel without David right now.

JENELLE: I mean, you guys are the ones who are refusing to film, not me.

UPDATES Judge signs off on CPS taking Ensley & Maryssa, Jenelle & David's whereabouts currently unknown, Jenelle responds to CPS taking Kaiser & her relationship status with David, plus Jenelle and her manager attack The Ashley?! It's a long post y'all! https://t.co/UMyR2O7ups

MORGAN: I mean, if MTV — if they come back and say, “Then OK, we’re not going to be able to continue filming with Jenelle for Teen Mom 2…”

JENELLE: I mean, like I said, I don’t know what to tell you guys. I need to stay home because it’s important for my marriage, and that’s what’s important to me right now: my marriage and my family.

Last week MTV announced that they would not be filming Jenelle for the upcoming season of Teen Mom 2, but their statement left the door wide open for her return. However, I assume that would only be an option if she and David split up, or if he went to jail/prison and was physically unable to crash a shoot. Meanwhile, CPS has removed Kaiser, Ensley, and Maryssa from The Land as they conduct an investigation into their well being while living with David.