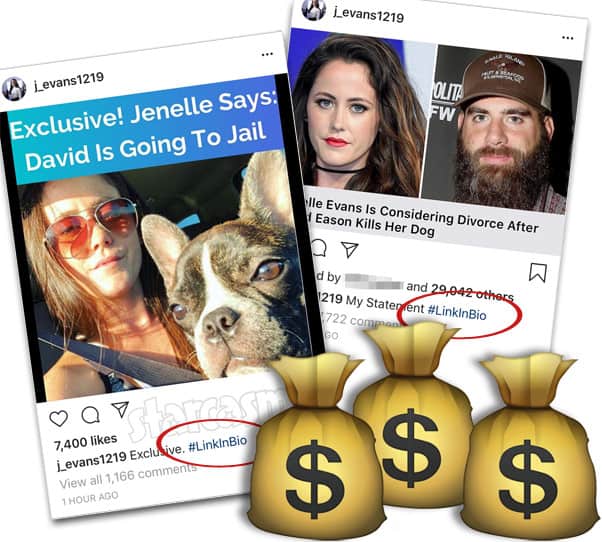 Jenelle Eason’s future on Teen Mom 2 has been in jeopardy for a while now, leading many to openly speculate what she planned to do for money if she was no longer getting paid by MTV. It seems that Jenelle has come up with a very unsavory solution: have her husband David Eason do something horrendous, then make money off of sponsored links to exclusive stories about it.

Jenelle’s most recent sponsored link on social media is to a story about her text messages after David shot and killed their French bulldog Nugget. In the text messages, posted by Celebuzz, Jenelle communicates with an unknown friend about the shooting.

JENELLE’S TEXTS AFTER THE SHOOTING

The other person responded with “bro” and then the 😩 and 😰 emoji.

Jenelle reveals that she was by the pool at the time, and David yelled at her from the woods: “Your dog is dead, I wouldn’t come over here.” Jenelle responded by yelling back at him. It’s unclear how Jenelle was by the pool and David shot the dog in the woods, yet Jenelle wrote: “I heard the gunshot in the living room.”

The conversation then shifts to the fact that the police were planning a visit to The Land. Jenelle seems fairly certain that the officers will not be able to do anything because the rest of the animals on the property are well taken care of. “My pitbull has a dog house outside and isn’t on a leash so he’s fine and my animals have food water and houses soooo I don’t think they will do sh*t unless I press charges.”

Jenelle then reveals that she thought David was going to be arrested. “Like no one knows he’s already going to jail tomorrow and he’s freaking out,” Jenelle writes. More texts from Jenelle in order:

He’s been texting me the whole time

But now he’s not

He still won’t answer me

The Ashley reveals that the text messages above were sent on Monday. As you are probably aware, police did arrive on The Land on Tuesday. They were unable to locate anyone and returned on Wednesday. “The deputy made contact with the homeowner, Mr. Eason,” the Columbus County Sheriff’s Department Public Information Officer stated. “The deputy confirmed that the occupants of this residence were okay. There was no evidence to substantiate further investigation.”

UPDATE – Before I could finish this post, Jenelle shared another sponsored link to the same Celebuzz article with the text messages, but the headline has changed from “Exclusive! Jenelle Says: David Is Going To Jail!” to “Exclusive! Jenelle Speaks Out About How David Snapped!” I guess they are backing away from the “David is going to jail” angle.

#TeenMom2 All the latest updates on David Eason shooting Jenelle's French bulldog Nugget after the dog snapped at Ensley, including Jenelle's 1st interview in which she describes what happens and reveals she and David are "not on talking terms" https://t.co/CEsaNFuOgv

DAVID REPORTEDLY PUNCHED AND THREW THE DOG BEFORE SHOOTING HER

Jenelle’s account in the text messages seems to line up with an account from a source for The Blast, although Jenelle’s account was far less graphic as it did not include what allegedly happened leading up to the dog being shot in the woods:

Sources with direct knowledge of the situation tell The Blast, after Nugget nipped at 2-year-old Ensley, Eason sprung up, grabbed the dog by the throat and slammed it on the ground.

We’re told Eason then began beating the dog inside the house, allegedly hitting it in the throat and throwing the french bulldog into a kitchen table.

Our source says the dog was wailing while Eason rained punches down on the animal’s head, and everyone in the house was too terrified to stop him during the attack.

Eason then picked up the lifeless dog and threw it out the front door, before walking inside the house and grabbing a pistol and shotgun, and then returning outside.

David reportedly returned to the house “covered in blood.”

Amazingly, The Ashley confirms that Jenelle returned to The Land (I assume with Ensley and Kaiser) Tuesday night.

Local police and Animal Control continue to pass the buck on the investigation into the shooting. According to law enforcement sources for TMZ, Animal Control officers visited Jenelle and David’s home earlier today.

“We’re told officers were able to drive onto the property through an open gate, but there was a grey pit bull on the porch and several ‘No Trespassing’ signs,” the site reports. “Our source says the Animal Control officers — fearing for their safety — left the property and alerted the Sheriff’s Department who, we’re told, will now attempt to complete the visit.”

TMZ continues: “We’re told officers want to determine if Nugget is alive and whose name is on ownership papers for the dog … from there, they’ll be able to determine next steps.”

UPDATE – From The Blast article linked above: “The Columbus County Sheriff’s Office and the Columbus County Animal Control tell The Blast they have ‘initiated a joint investigation into allegations of animal cruelty that reportedly occurred at a residence on Money Hole Road in Riegelwood.’”

There is a Change.org petition started calling for further investigation into the incident, and companies believed to have purchased advertising during Teen Mom 2 are being contacted via email and social media to be made aware of what they are seemingly endorsing.

Here are a couple of the responses so far: 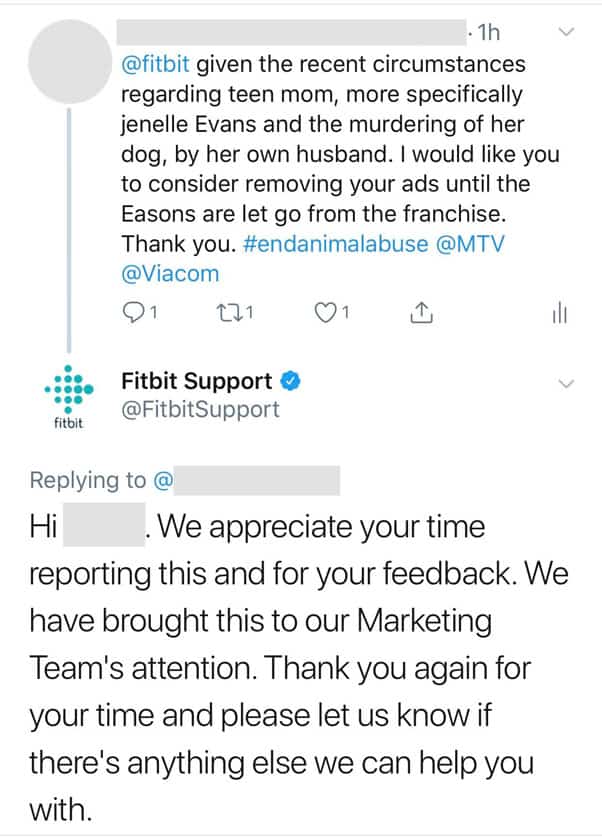 Thank you for bringing this to our attention. We are no longer advertising on Teen Mom 2. Again, thank you for your feedback.

We appreciate you sharing this with us and have informed our team about this immediately. 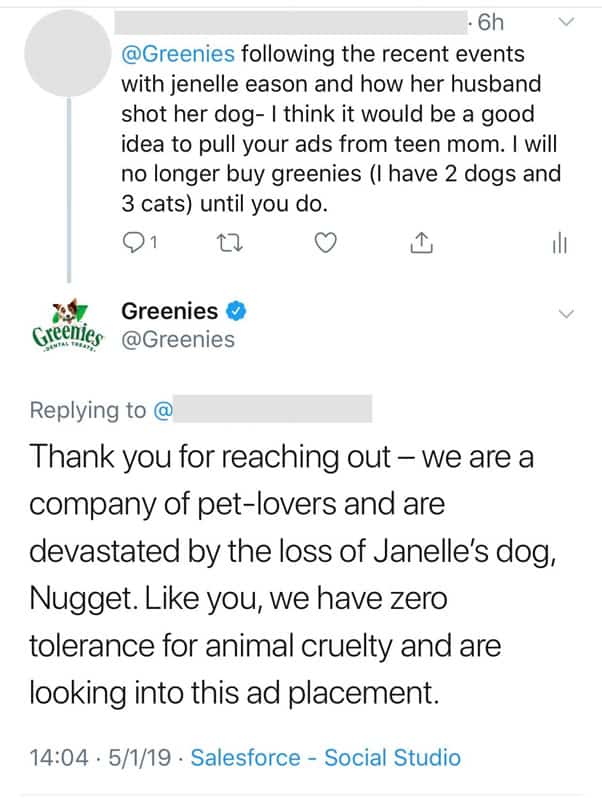