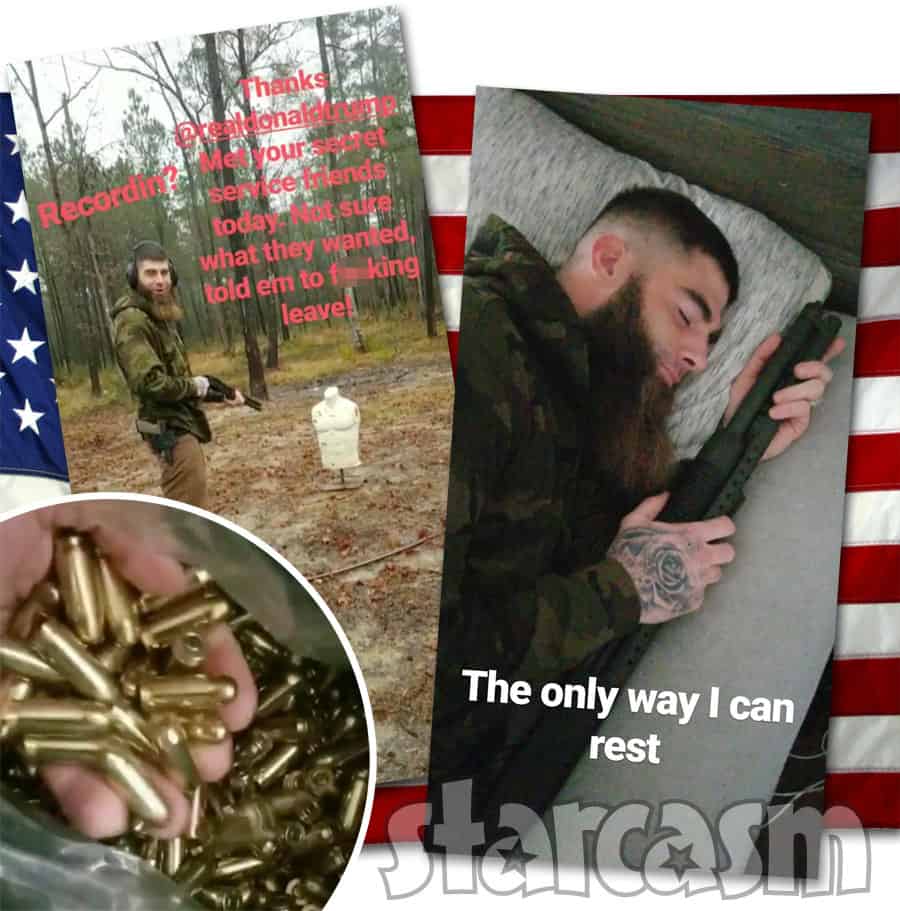 Teen Mom 2 dad David Eason may not be wearing any more MAGA hats any time soon as he reveals that the Secret Service paid a visit to The Land after David posted a video of himself shooting an automatic rifle on Instagram and used the #Trump hash tag. David posted a series of furious videos in which he declared that he will shoot anyone else that comes on his property without a warrant, and he shows off his disturbing arsenal of weapons and ammunition.

David kicked things off with an Instagram photo appearing to sleep with some sort of shotgun and shared this personal message to President Donald Trump:

Thanks for the visit from your secret service friends today @realdonaldtrump. I told them how much I like you except the fact you want to ban bump stocks and take guns away from people just because someone “red flagged” them. Then I told them to get the f**k out of my house and dont ever come pass my trespassing signs again. Like holy sh*t, I thought your people were all about border security. Well there is a border around my land that is protected from intruders by lethal force also, just like your house. Dont expect my gate to ever be open again. I hope and pray that nobody ever tries to trespass on my property as they will be met with fire and fury, the likes of which they have never seen before. #stayoffmyland #notrespassing #donttreadonme #posted #privateproperty

And for those of you curious about the original video that put David on the Secret Service’s list of potential threats to the President of the United States, here it is:

They will say I've gone off the deep end just wait for it! #bangbangbang #bumpfire #bumpthis #nancypelosi #trump #maga

Everything in this post so far is disturbing to me, but nothing could prepare me for the series of Instagram story videos that David posted after the visit from the Secret Service. Here are some quotes from David followed by a compilation of all the clips:

So Instagram, since you’re so f**king mad you send the f**king F.B.I. (S.B.I.?) to my house, I’ma upload a LOT MORE gun videos! [David would later correct himself and confirm that it was the Secret Service] And you know what? I got a gun on my hip! [The camera pans down to show a holstered pistol as the Secret Service agents are driving away in their van.] F**k you F.B.I.! [David gives them the middle finger.]

And for you Secret Service officers, I’m very flattered that you come on out to my house just to check things out and all, but don’t be a f**king b*tch. And I’m gonna start posting guns and putting #Trump ever f**king time! So, go f**k yourself

Now, you Secret Service mother f**kers, you wouldn’ta came down here if my gate was closed. And if you did, I woulda started shootin’ at you because I wouldn’t know who you was! Are you gonna come back? I don’t think so. And you can be mad. You can take that as a threat if you want to. But you already know that anybody that comes on my property is trespassing, is liable to get f**king killed. Anybody.

Now, I don’t care if you’re the police, if you’re the mother f**kin’ S.W.A.T. team, if you’re the President himself, my momma — I don’t give a f**k who you are, you don’t come on my property unless you call me first! And from now on, the gate is always locked.

Here are David’s video clips, which contain quite a bit of profanity so beware:

It’s unclear if Jenelle was on The Land when the Secret Service paid a visit. David later posted a couple non-Trump related clips with his daughter Maryssa, so we know she is currently at the house.

UPDATE – Jenelle also uploaded a video using the same microphone as David and Maryssa, so I assume she is home as well.

I believe that Kail Lowry is the only one of Jenelle’s Teen Mom 2 co-stars to respond to David’s posts. Here are her tweets:

Wow @ David’s IG posts. Do we have confirmation that Jenelle & the kids are ok???

I reached out via text but not delivered @pbandjenelley_1

UPDATE – Chelsea DeBoer’s dad Randy Houska responded to our tweet and offered up his take:

There is something seriously wrong with that guy

UPDATE – David is doing some MAJOR backtracking on his comments as he says people just misunderstood what he was trying to say — this after he was blocked from using Instagram. Oh, and he stabbed himself playing the knife game. Click the link for all the latest!