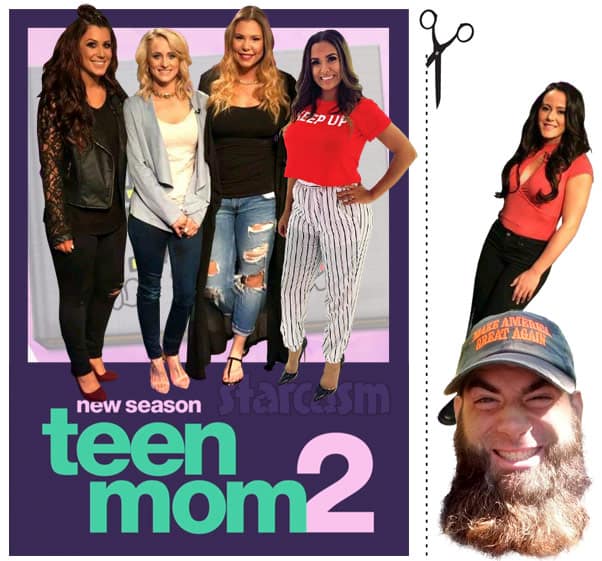 It has been one week since Teen Mom 2 star Jenelle Eason’s French Bulldog Nugget was beaten and then shot and killed by her husband David Eason. Despite a huge backlash online, including numerous businesses pulling their ads from the show, MTV has remained completely silent about the incident. That all changed today when the network made their response loud and clear by officially cutting Jenelle out of the upcoming season of Teen Mom 2.

“MTV ended its relationship with David Eason over a year ago in February 2018 and has not filmed any new episodes of Teen Mom 2 with him since,” an MTV spokesperson told Us Weekly in a statement. “Additionally, we have stopped filming with Jenelle Eason as of April 6, 2019 and have no plans to cover her story in the upcoming season.”

I think it is VERY important to point out MTV’s wording here. All they are confirming is that Jenelle will not be “in the upcoming season.” That is a lot different than their announcement about David Eason in which they clearly stated: “We are ending our relationship with him.” This certainly allows MTV the flexibility to add Jenelle back as soon as next season, which I assume would only happen if she and David split.

That was not the case.

The MTV statement reveals that they haven’t filmed with Jenelle in more than a month. Despite Jenelle signing on for Season 9b, producers had yet to figure out a way to work around David Eason. They refuse to film if David is anywhere near the set, and he had reportedly threatened to shut down any scheduled filming. Well, he certainly followed through on that promise!

The potential vacuum left by one of reality television’s most talked about stars on one of the most popular shows in the genre has already got the rumor mill (and clickbait article mill) going. Jenelle has previously turned down WE tv’s Marriage Boot Camp because they wanted her sister to appear, and some are speculating that she might revisit the offer given her current situation. That show is certainly not averse to notoriety, but it’s unclear if they would be willing to let David appear and risk the backlash from fans and advertisers.

Also unclear is whether or not MTV would grant her permission to appear. Despite no longer filming her for Teen Mom 2 (for now), it is my understanding that they still have the final say in what other reality show projects Jenelle can participate in for a set period of time.

There is also speculation about who Jenelle’s replacement might be — should MTV go that route. The obvious candidates would be former Teen Mom OG star Farrah Abraham and Teen Mom 3 star Mackenzie McKee. However, The Ashley says MTV already has a backup plan in place, and the replacement is neither of those two. The Ashley is waiting on confirmation before revealing who the mom will will be.

I’ve been writing about Jenelle since before her first appearance on 16 and Pregnant — I don’t know many bloggers who can say that. Here is my initial reaction based on the preview trailer for her season:

Judging from the Season 2 trailer and from Jenelle’s various online profiles (links below), she is a very confident 17-year-old who uses colorful language, has an affinity for marijuana, and absolutely no fear of conflict – which sounds like a perfectly volatile combination for the season premiere!

And here is Jenelle’s MySpace bio from the article:

I’m jenelle, and I’m not anything You Can Come Remotely Close to. I Wear my Heart on my Sleve and my emotions always dance around me. I Have the Biggest Heart, and I Hate Hurting People’s Feelings. I’m Very Sexual, and I Can Be a Perv. Also, I Have a Dirty mind<3 Oh, and I’ll always Say what’s on my mind! Even if it is Sexual. I’m done With Being a Sidewalk you can Step all over. Try again. I’m unbelievably Tacky and I’m So Ditzy it’s unreal. Sorry, I’m me. I’m Horrible at First impressions, So Try again and You’ll Have Better Luck. Give me a chance, and I Promise I’ll Give You What You deserve. I’m not conceited, it’s just my time to shine, and if you’ll be my sky, i’ll be your brightest star. I Know Where I Stand, and I Know Who I am, and I don’t need anyone to Tell me otherwise. I Usually Hold things in and Just deal, until I explode, and I need to Find a way to Fix that. Best Believe, If I Say I’m Going to do Something, Sooner or Later i will. I’m a Good Person, and I Have the Biggest Heart, But many People don’t Get to See that Side of me, Because They don’t Care to. I make mistakes every single day, I’m only Human, But I eventually Try and Fix them. I Will Knock Your Teeth down Your Throat if you mess With my Friends or Try to Get With my Boyfriend, and That’s a Promise. my Heart is open to anything more exciting than myself, So Stop Seeing me Through other People’s eyes or opinions, and Take a Look for yourself, I Dare you.

Since that initial profile post from February of 2010, we have done close to 800 articles related to Jenelle. 800 articles! Obviously, we will continue to write stories about her despite her absence from Teen Mom 2, but this is certainly a momentous day. Prior to David Eason’s infamous homophobic rant that got him fired from the show, I really couldn’t have imagined what Jenelle could have done that would have merited MTV firing her from the show. I say that in the context of knowing Jenelle and assuming that she herself wouldn’t shoot a French bulldog, etc.

David Eason though. Wow. How is it possible that a Teen Mom star is currently in a long-term relationship with someone that is even more obviously terrible than Matt Baier?!

I have always had a soft spot for Jenelle, and I am seriously concerned for her well being. I realize that she is a grown woman and she can choose to leave David, but anyone familiar with abusive relationships knows that it isn’t that simple. Plus, she has the added issue of not wanting to look like an idiot in front of the entire world. Oh, and she basically has no close friends or family either — at least not that I’m aware of.

I just hope she finds the strength and wisdom to not leave David, but to kick him off The Land that she paid for. Given the dog shooting and the previous incident with the 911 call after her altercation with David, I can’t imagine it would be that difficult to get an order of protection.

I’m just rambling at this point. I’m completely astonished at what all has happened over the past week, as I’m sure a lot of our readers are. We will continue to update everyone on the current investigation into David Eason’s actions by police and Child Protective Services, and I only hope that it doesn’t culminate in some sort of horrific violent scene involving Jenelle, the children, and/or the police.