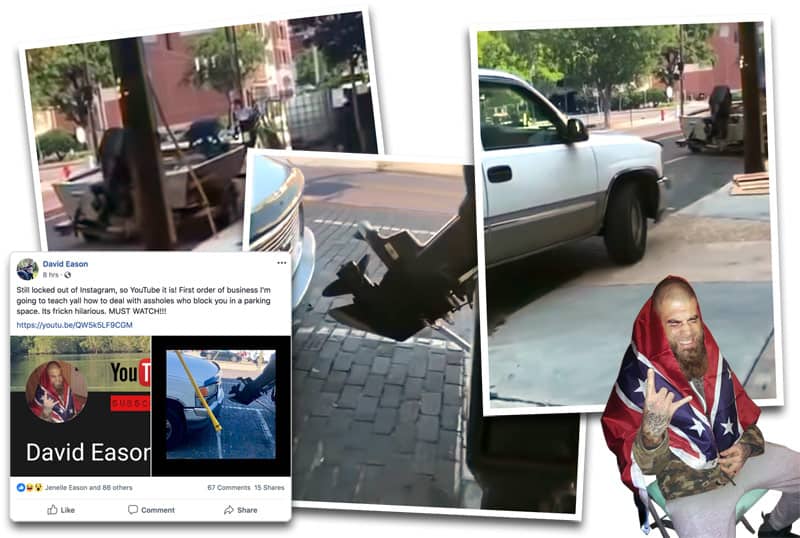 Former Teen Mom 2 star David Eason continues to draw the attention of law enforcement agencies, this time after posting a video on YouTube in which he forcibly tows another parked vehicle because it was too close to his trailered boat — the motor of which was clearly beyond the designated parking space.

In the video, you can hear David’s wife Jenelle Eason narrating as he attaches a cable from his front bumper wench to the hitch of the other vehicle before dragging it backwards. The other vehicle’s back wheels remained locked and can be heard squealing. The front wheels turned a bit during the tow, and as a result, the other pickup truck wound up partly on the sidewalk.

Jenelle laughs and says: “Well, pulled that motherfu**er out of the way!”

Here is David’s description for the clip on YouTube:

Learn the right way to deal will a$$holes who think it’s cool to block you in a parking space. Good thing my trailer has a folded tongue that allowed me to get my truck out so I can tow him out of the way, in order to move my boat. Subscribe to my page to see a lot more interesting videos in the future!

And the actual video:

The incident took place in Wilmington, North Carolina, and it was quickly reported to Wilmington police. “We were made aware of the video soon after it was posted online and immediately began investigating it,” Wilmington Police Department spokesperson Jennifer Dandron tells local news station WECT. “This is an absolutely inappropriate way to handle parking issues,” she added.

Police have identified the owner of the other vehicle, but it is not clear if he or she plans to press charges.

According to David, it wasn’t just the police department who identified the other truck’s owner! After sharing the video on his Facebook page, a commenter pointed out: “Lol he’s gonna do that to the wrong person one day and their gonna lose it on him.” David responded by claiming: “Oh he did loose [sic] it, and regretted it. Sorry I didn’t post that part.”

I feel very certain that if David walked out and saw someone doing this very same thing to his truck, and that person refused to stop, that David would pull his licensed handgun on the person. I am also guessing that David would completely agree with my prediction.

In addition to potentially breaking the law by taking matters into his own hands and towing another person’s vehicle, David’s anger and actions seem completely unjustified for two reasons:

1. The truck that David towed was parked COMPLETELY legally and well within the markings for the parking spot. The boat motor, on the other hand, was clearly beyond the designated parking spot that the trailer was in.

2. I’ve had some experience with boats on trailers, and there was CLEARLY no need to tow the truck parked behind the boat when David could have easily parked in front and beside his trailer with his hazard lights on, and then just lifted the trailer up and over to his hitch.

I tried to research what the Wilmington city ordinances are for parking boats on city streets, but I couldn’t find anything.

Regardless, if there is a law against parking a boat downtown, or even if the other vehicle owner decides to press charges, I can’t imagine that David would be facing anything more than a minor misdemeanor infraction.

UPDATE – WECT’s Ben Smart interviewed the man who says he is the owner of the truck that David Eason towed. Terry Hill reveals that the incident took place back on June 13, and he had to replace the transmission in his truck as a result of David forcibly towing it. He seems to confirm David’s suggestion that the two met on the scene at the time.

“He was just fussin’ and cussin’,” Terry says as he laughs. “He jumped in his truck, him and his girlfriend, and drove on off.” He says he called police, but did not press charges.

Here’s a rough video of the WECT report, which the station has yet to post online:

TOWED AWAY by a 'Teen Mom 2' star…. This man claims his truck is the one featured in a video posted by David Eason, who appears on MTV's show 'Teen Mom 2.'

Police are investigating to see if charges will be filed.

As revealed in the video, Terry has difficulty walking, and as a result, he has a handicap placard for his truck. “People with handicap signs can park for free in downtown Wilmington without paying anything in the meter,” Ben revealed on Twitter. (You might have noticed Jenelle emphasizing in the original YouTube clip that the other driver had not put any money in the parking meter.)

Ben says he reached out to David Eason repeatedly to respond to the story, and David claims that the truck belonged to a friend of his and it was just a stunt for YouTube:

David Eason, reached by email, claims this was a YouTube stunt to gain followers. David said this was his friend’s truck, and even doubled down when I told him we were interviewing Terry. David repeatedly denied requests for an interview, saying he didn’t have time @wectnews

Here is David’s response via email to Ben requesting an interview:

I don’t have time to meet with you but this was my friend’s truck, I was just messing with him one day. Don’t get into my personal business dude I’m just trying to get followers on YouTube geesh!

UPDATE – Terry Hill has since had a change of heart and has decided to press charges against David — a change of heart that reporter Ben Smart and the Wilmington Police Department essentially live tweeted. As you might expect, Jenelle and David are FURIOUS, and Jenelle has stated she has contacted a lawyer to go after Ben for sharing comments made by David off the record. Plus, she argues that Terry’s change of heart was “against the law” because he was convinced to press charges by others. CLICK HERE FOR ALL THE LATEST!