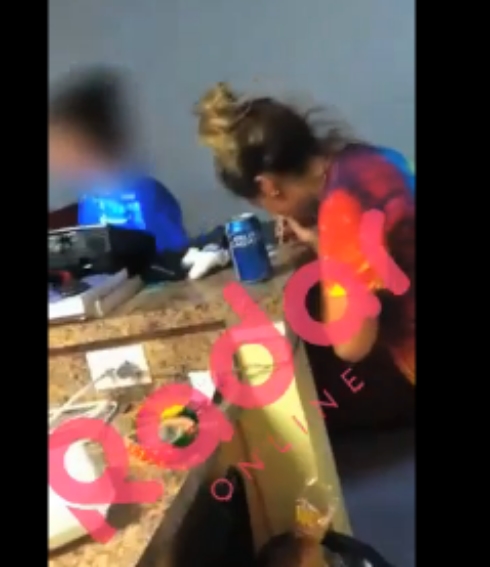 Jenelle Evans (Rogers) has been tweeting about a video that would soon be hitting the web, and here it is! The Teen Mom 2 star claims that it was her ex-fiance Gary Head and his close friend Kymber who were behind the sale of the video, which was recorded last summer and shows her snorting a white powder off of a countertop.

“Jenelle was on probation at the time and she bought pills from a drug dealer and crushed them up,” a source close to the situation tells Radar Online. “The pills are Percocet, and she did not have a prescription for them.”

(The allegations of Percocet use by Jenelle are not new, Her husband Courtland Rogers said in a Stickam video session in January that she “gets 90 Percocets and 90 Lorazepams a month.”)

Radar’s source, who Jenelle claims is either Gary or his friend Kymber, says that Jenelle was actually more reasonable when she was on drugs. “She could be really violent when she didn’t get her way and throw temper tantrums,” the source says. “But when she snorted the drugs she was really mellow and zoned out.”

The same source adds that Jenelle used prescription pills as opposed to harder drugs because she knew they’d be out of her system within 72 hours, which reportedly worked well for her since she was on probation at the time.

A friend of Jenelle’s tells Radar that the video is “stupid” and irrelevant at this point in her life. “The video was taken a long time ago, before Jenelle went to rehab and stopped doing drugs.She said it was stupid. She was obviously not doing great when that was shot and it was mean of someone to take that video of her. But now she’s better and isn’t doing drugs anymore.”

In Jenelle’s defense, she has actually has seemed to curb the drama — at least the online drama — for a longer period of time than I can remember since her episode of 16 & Pregnant debuted more than three years ago. Of course, this video might be the spark that sets off another powder keg.

NOTE: This video was actually released once before (in late July 2012) on her YouTube but was quickly removed. You can see the screen shots here. At the time she said, “Lmao I didn’t snort sh!t that was a pixie stick I was dared to do it. If it was Xanax I would admit it.”