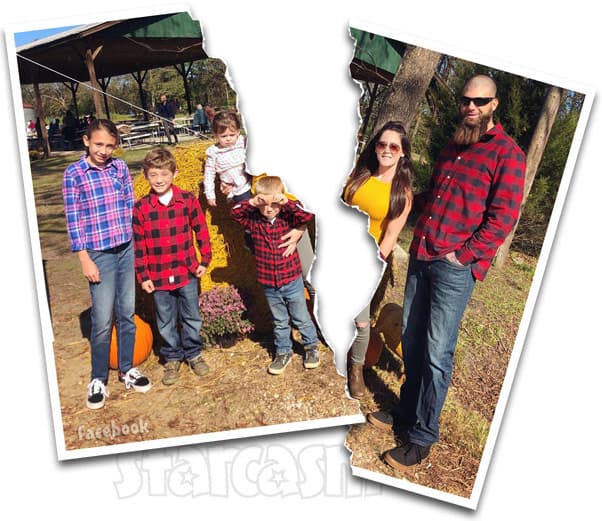 The life of former Teen Mom 2 star Jenelle Eason continues to crumble all around her due to the controversial and threatening actions and statements from her husband David Eason. In the latest development following the execution of the couple’s French bulldog Nugget at the hands of David, a North Carolina judge has signed off on a court order to remove the couple’s daughters Ensley and Maryssa from The Land and place them into CPS custody while an investigation into their well being is finished.

Multiple sources, including The Ashley’s Reality Roundup, TMZ, and Radar Online are confirming that the judge signed the order Monday. All three sites also report that CPS has yet to take the two girls into custody because the whereabouts of David, Jenelle, Ensley, and Maryssa is currently unknown.

“The Ashley’s sources tell her that Jenelle and David heard about the order being signed and are no longer on The Land,” says the mos reliable source of Jenelle info over the past five years. “Ensley and Maryssa are still with Jenelle and David, from what The Ashley hears, but the family’s location is unknown at this time.”

Radar Online describes the situation as “Jenelle’s desperate run from CPS” before sharing their source’s claim that “Jenelle and David are hiding out.”

The Ashley responded to Radar’s “hiding out” report by being very clear about what she knows and what she doesn’t:

Im not saying they're hiding them. Or that they are on the run. Just that they're not in the land

UPDATE – The Ashley has since confirmed that Jenelle and David returned to The Land Tuesday night. She does not know if Ensley and Maryssa are with them.

UPDATE – The Ashley is now confirming “that there are no more kids currently in the care of Jenelle and David.” The couple reportedly dropped Ensley and Maryssa off at David’s mother’s house Tuesday night, but The Ashley cannot confirm that report. She does suggest that the children are staying with someone as she adds: “It is not yet known if CPS will seize the children from their current location(s).” Also, Radar Online is reporting that “Jenelle is meeting with the kids at social services this afternoon. It is supervised visitation. She asked and they are going to allow it.”

I need prayers for Kaiser, Ensley and Jace. Kaiser is safe right now. Ensley not so sure, my mother and I hope God puts her in good hands. We’re not sure where CPS put her. If I have to take her in, I will. My mother will as well. I knew this day would eventually happen. Jace is okay with my mom he’s very upset. We need prayers.

The account added: “Child Protective Services in Columbus County just took the kids away from my sister my mother and I are handling it.”

Ashleigh’s Facebook page is now deactivated, and she has since spoken with The Blast to claim that she did not make the posts. She alleges that she has not spoken publicly about the current situation with CPS and Jenelle’s children, and that the Facebook page that made the posts is fake.

Jenelle didn’t seem to believe the page was fake, however, as she took time out of her rather crazy schedule to respond to her sister’s alleged comments: 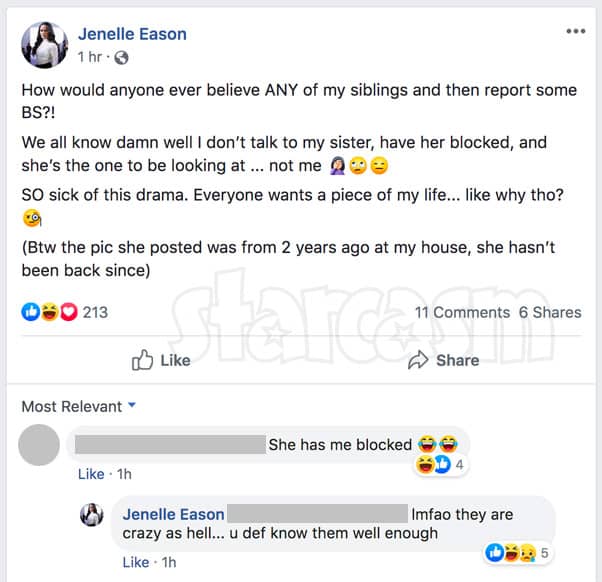 If you know anything about Jenelle’s sister Ashleigh, then you know she has her own issues with losing custody of kids. I am guessing that Barbara is probably involved to some degree in the CPS investigation and temporary custody arrangements, but the notion that CPS would involve Ashleigh in any capacity — especially Ensley and Maryssa — is preposterous.

The last time we checked in on the Jenelle and David situation was after it was revealed that CPS had a family member pick Kaiser up from daycare on Friday. The Ashley confirms that the family member was Nathan Griffith’s mother Doris, but The Ashley also reports that Kaiser is not currently with Doris, and he hasn’t been with her since she picked him up on Friday. She says that in addition to signing off on CPS taking Ensley and Maryssa, the judge also signed an order allowing Kaiser to stay with Nathan for the time being.

TMZ says that Kaiser is currently living with his dad Nathan and Doris.

Just after The Ashley broke the story about CPS authorizing a family member to pick Kaiser up from CPS, Jenelle’s Instagram account shared a screen cap of the article on Instagram and wrote: “Keep writing lies!!! This wasn’t exclusive!”

Jenelle also shared an Instagram post with a photo of The Ashley’s article and captioned it by writing: “Stop Lying and writing stories! Want to be an Adult and ask me about my kids let’s go! #warning #liar #shotsfired”

Jenelle later deleted both posts before uploading new posts insisting that the comments about The Ashley were not made by her.

Meanwhile, Jenelle’s manager (or PR person, or something like that ) Johnny Donovan also went after The Ashley with multiple angry posts on Instagram — including one in which he appears to threaten her! “@theashleysrealityroundup your [sic] disgusting!” was a message typed over a screen cap of The Ashley’s article about Kaiser. “Coming for you!!! Keep not answering ur phone and writing stories.”

Another post was just text over a black screen that began with the hash tag #bum before continuing: “@theashleysrealityroundup your [sic] a definition of a LIAR!! And then u hide!! Keep writing. ✍️”

Someone shared the posts on Twitter and tagged The Ashley. “Johnny d*****bag wrote that he’s ‘coming for’ @TheAshleysRR. Is this a threat?!? What kind of ‘professional’ PR person would speak like this?!?” reads the accompanying tweet.

“I do not take the threats lightly,” The Ashley replied.

I was actually unaware that Jenelle and Johnny had patched things up after their epic falling out back in 2016. Here is what Jenelle had to say about Johnny back then: 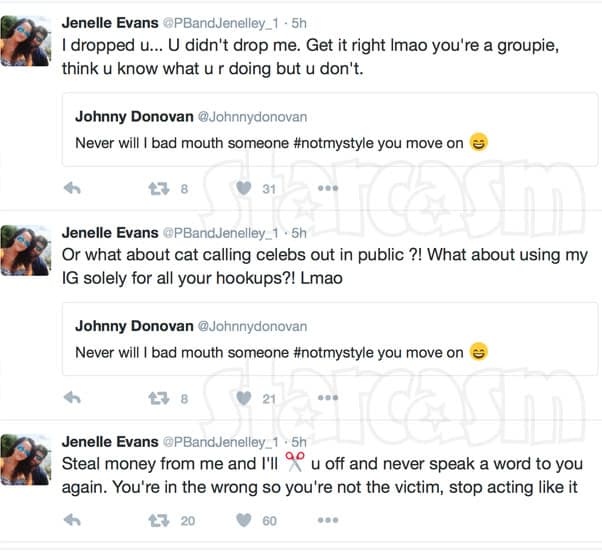 Johnny seems to have quite the history of taking things personal with Jenelle and getting his own hands dirty on social media. In March of 2016, he got involved in the feud between Jenelle and co-star Chelsea DeBoer because Chelsea supposedly stole Jenelle’s idea to have a website and sell cosmetics. And who could forget his involvement in the “Little Kaiser” potty training urinal?

OK, I got a little side tracked there.

Jenelle spoke with US Weekly on Monday about CPS allowing Doris to pick Kaiser up from daycare on Friday. “Kaiser was taken from his daycare by his grandmother [Nathan Griffith’s mother, Doris] with no notice or call to me,” Jenelle confirms. “CPS told Doris to take Kaiser without my consent and still have no legal paperwork signed by the judge stating my kids are taken from me.”

She says that she has spoken with Nathan “briefly” about the situation. “Our current custody order is still in place,” Jenelle points out. “Nathan is to have supervised visits and only supervised by Doris. Surprisingly, me and Nathan have been getting along, so I’m willing to maybe let his visits be unsupervised. Me and Nathan have been in contact during all of this. He doesn’t want Kaiser taken from me.”

Jenelle says that her “legal team” has been on the case since Friday. “I’ve been fighting to get my son back, as they went behind my back and removed him without my consent.” 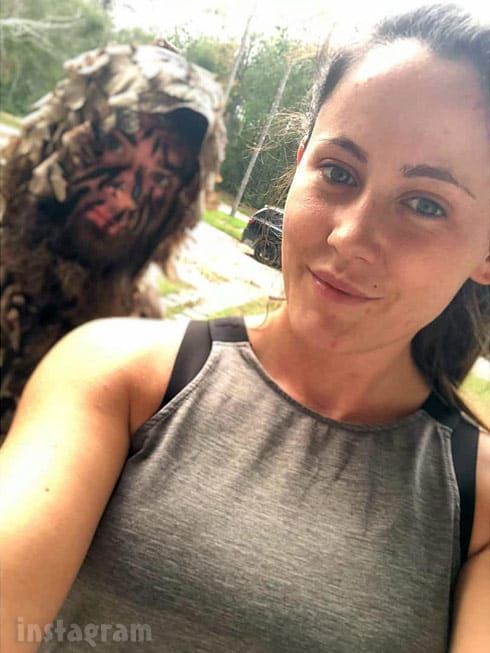 Jenelle also spoke with US Weekly about her current relationship status with husband David Eason. “My relationship with David now is still in a healing process, of course,” Jenelle admits. She says that they plan to go to marriage counseling “because he feels as if we both need it.” Jenelle says she agrees. (I just want to interject that every time in the past when it has been reported that David wanted to apologize, or enter anger management therapy, or anything similar, he has always spoken out later to deny the reports.)

And what about the potential for a divorce between the two? “Not considering divorce unless he refuses counseling with me,” Jenelle says. Well, there shouldn’t be any problem there given that David feels as if they both need counseling!

That should get you all caught up on the Jenelle and David child custody situation for now. I hope we will have an update soon about the peaceful handing over of Ensley and Maryssa to CPS. Stay tuned.

Jenelle Evans on why she was in rehab, and if she’s single