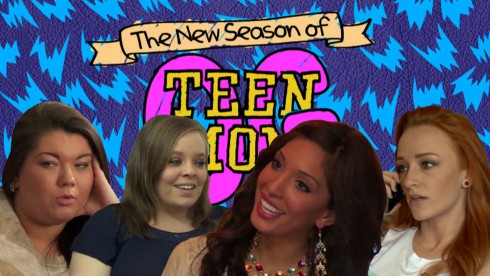 Teen Mom is returning to MTV on March 23 with a new look… And new title!

“In a first for the Teen Mom franchise, Teen Mom OG will break the fourth wall, pulling back the curtain to reveal their relationships with the producers and crew, the challenges of raising children on camera and how life in the public eye has shaped them as parents and people,” MTV said in a press release today. “Each episode will give an unprecedented look into these young mothers’ lives and how they’re facing the responsibilities of parenthood as their children enter kindergarten, start little league and reach other milestones of youth.”

The premiere date is, unfortunately, much later than sources originally reported. But, MTV made the wait a bit easier by sharing previews for Teen Mom OG‘s four stars.

Maci Bookout: In her preview, Maci gets impatient when ex Ryan Edwards is late to pick up their son. The rest of the season will follow as Maci and boyfriend Taylor McKinney find “themselves dealing with an unexpected pregnancy. Meanwhile, she continues attempting to co-parent Bentley with Ryan who makes everything extremely challenging.”

Catelynn Lowell: Catelynn’s preview video was filmed last summer during her gender reveal party. The rest of the season will follow her and Tyler Baltierra’s joyous road to parenthood, which is slightly marred by their “struggle to mend a strained relationship with the adoptive parents of their daughter, Carly.”

Amber Portwood: In Amber’s video, she and ex-fiance Gary Shirley get into a bit of an argument. Although not much has changed on that front, the rest of the season will show Amber’s attempts “to navigate a life of sobriety while diving back into the world of dating.” MTV also seemed to reveal that Amber and boyfriend Matt Baier are engaged!

Farrah Abraham: As the last one to sign on for Teen Mom OG, Farrah’s preview clip shows her struggles with producers when they come back into her life. The rest of the season will follow Farrah as she “finds love in a long distance relationship for the first time since the death of Sophia’s dad.”