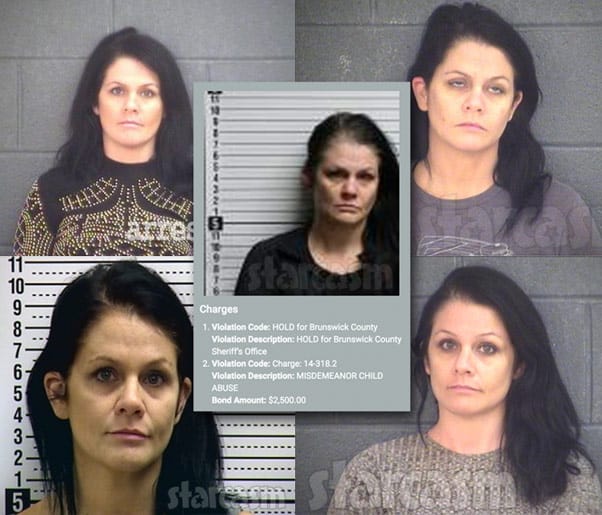 Former Teen Mom 2 couple Jenelle and David Eason appear to be relatively drama (and employment) free after their reconciliation back in January. Unfortunately, not all of the Easons are staying out of trouble!

David’s sister Jessica, who has publicly feuded with her brother and Jenelle multiple times on social media over the years, found herself back behind bars last month for child abuse! According to Brunswick County Jail records, Jessica was booked on April 1 with “misdemeanor child abuse” listed for one of the violation descriptions. The other violation description states that the booking was a “hold for Brunswick County Sheriff’s Office.”

Jail records indicate that Jessica’s bond amount was set at $2,500.

It seems Jessica was able to post bond, because she has been posting quite a bit on social media since April 1. She returned to Twitter after a break of more than three months to respond to The Ashley’s Reality Roundup volunteering to interview Jessica after another Twitter user suggested the idea. “Ohhh lawwd LOL,” Jessica responded.

Speaking of “Ohhh lawwd,” Jessica’s booking motivated me to check to see if she has an upcoming court date for the charge. According to court records, she has at least FIVE court dates coming up!

On July 16 she has a court date for misdemeanor child abuse and reckless driving. I would assume that the charges are connected and perhaps Jessica was charged with reckless driving with a child in the vehicle? That is purely speculation however.

Here is the definition of the reckless driving statute that Jessica is being charged with violating:

Any person who drives any vehicle upon a highway or any public vehicular area without due caution and circumspection and at a speed or in a manner so as to endanger or be likely to endanger any person or property shall be guilty of reckless driving.

Perhaps the shelter-at-home order has been a good thing for Jessica, because all of her pending court cases involve driving offenses. Here are some other 2020 court dates listed for Jessica, along with the charges:

Just like her brother, Jessica is no stranger to spending time behind bars. She was arrested in May of 2018 and charged with felony possession of a controlled substance. She was also booked twice for simple assault, once in July of 2017, and then again in January of 2018.

If you’re wanting to catch up on Jessica’s very public feuding with Jenelle and David over the years, including the origin story of the term “mud duck” in relation to Jenelle, here is a timeline of our articles on the subject:

May 11, 2017 – Jenelle and Jessica get into HUGE feud, trade drug abuse claims and more!

May 17, 2017 – Jessica continues feud with Jenelle Evans on Twitter

The feud between #TeenMom2 star @PBandJenelley_1 and her sister-in-law Jessica Eason has been rekindled as Jessica calls Jenelle a "slut" and criticizes her for having multiple abortions: https://t.co/3cQ1jdaDAz #ICKY

December 15, 2018 – Jessica says David Eason ‘has lost his mind and his heart’ and Jenelle ‘loves this garbage as much as he does’