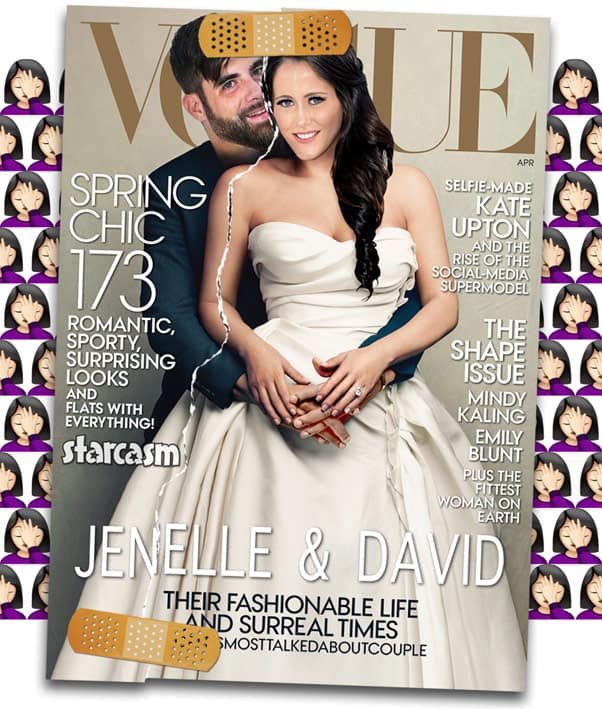 Former Teen Mom 2 star Jenelle Eason announced in late October that she had taken her children and left her husband David Eason and the state of North Carolina behind. Many fans speculated that the split was a publicity stunt, but multiple reliable sources asserted that it was real. The legitimacy of the split seemed to be verified when Jenelle filed for a restraining order against David in Tennessee in November, claiming that she feared for her and her children’s safety.

Jenelle looked to be moving on in search of her newest soul mate when she made an interstate booty call to Massachusettes late last month to hook up with a fellow MTV alum, Is She Really Going Out With Him? “Masshat” Herbert “Herbie” Wilkinson. But Herbie wasn’t really the love bug after all, and Jenelle was soon braved the inevitable esophageal spasms and caught a flight back to Nashville to be reunited with her children.

However, that wasn’t the only reunion for Jenelle in Nashville! Shortly after news broke that Jenelle had voluntarily dismissed the restraining order against David, the Investigation Discovery “frightening father” made the road trip to Music City where he has reportedly been staying with Jenelle.

David shared a photo of Ensley on Instagram earlier today, and used his trademark charm to affirm that he was the one that took the picture: 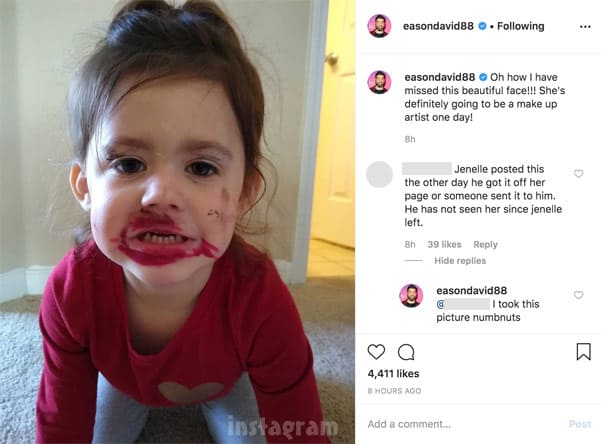 The initial reports of Jenelle and David being friendly again were met with disbelief online, but TMZ shared a photo of David and Jenelle (and their daughter Ensley) looking quite chummy together on the streets of Nashville:

Twitter user @ustacould (aka Roux), who has been accurately breaking Jenelle stories since early last year, teased the bombshell reconciliation on Tuesday:

Big news will be dropped tomorrow about the Je/David drama…
Absolutely unreal…
I
Just
Can’t✋?✋?
?????? pic.twitter.com/SyV5VUCbuH

Roux has emphatically stated that the split between Jenelle and David was absolutely legit, and she seemed completely blindsided by the news. “That break up was 10000% not fake,” she tweeted. “She had too many ppl supporting her and she was actually doing really well. This is just wow…I just don’t get this. She was doing so well. He’s had a revolving door of women in that trailer so this won’t be good.”

In addition to expressing her disbelief, Roux also revealed some behind-the-scenes details about Jenelle’s “escape” from David, including why she moved to Nashville.

One Twitter user suggested that the reconciliation was inevitable because Jenelle doesn’t have much money coming in and no support system in Nashville. “The deal is she’s had help this whole time with the kids so it’s not that,” Roux wrote. “She moved to TN bc [Nathan’s mom] Doris moved there so she’s had Doris taking care of the kids this whole time. Those kids have been doing so good. This is sad.”

Will Jenelle be heading back to The Land with David when he returns? “I don’t think she’ll go back to The Land real quick,” Roux speculated, seemingly leaving the door open for the possibility given Jenelle’s unpredictable actions so far this week.

#TeenMom2 Jenelle gets a restraining order against David Eason and leaves the state with Ensley. The source that broke the story says David was served with the order and "he's losing it." https://t.co/lxLHJwbgKT

On the subject of Jenelle returning, her getting back with David certainly erases any chance of her returning to Teen Mom 2 again any time soon — but could we be seeing the dysfunctional couple on WE tv? “No Marriage Boot Camp,” Roux revealed. “Nope. They want nothing to do with them.” [I want to iterate that Roux has been impeccable when it comes to her insider information, even if Jenelle had a change of heart about the “10000% not fake” break up.]

As we all wait for the inevitable #Jenavid reconciliation updates (including social media fights, missing pets, and 911 calls), here’s a little tune to set the mood from another young woman who couldn’t seem to leave a toxic relationship behind:

UPDATE – I felt inspired to edit the TMZ photo for some reason: