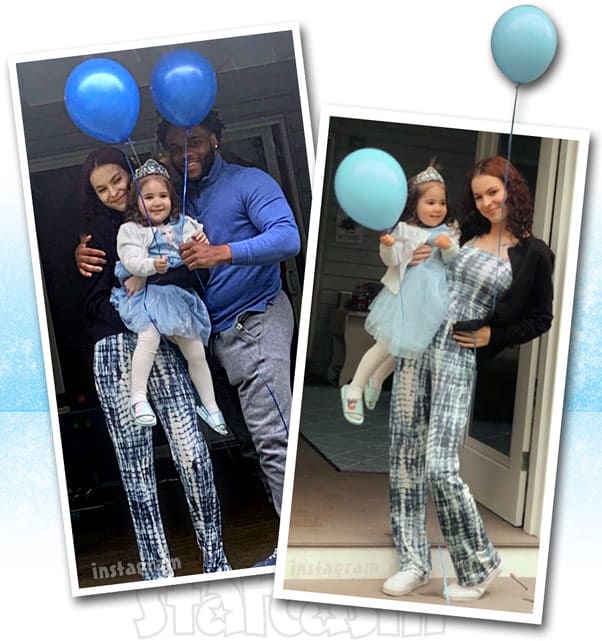 Congratulations to Unexpected mom Lilly Bennett! The 19-year-old Season 1 alum announced earlier today that she is pregnant again, this time with her new boyfriend!

The pregnancy announcement was also a gender reveal as Lilly reveals that her two-and-a-half-year-old daughter Aaliyah will be getting a little brother. “EXTREMELY excited to announce my SON coming November 2020!!” Lilly captioned a gallery of photos and videos of the gender reveal on Instagram, along with this string of emoji: 💙💙💙✨✨

The dad-to-be is Lilly’s new boyfriend named Lawrence, a standout high school athlete who graduated last year. It’s unclear just how long the couple have been dating, but their first public photo together appeared on Lilly’s Instagram in February. Lilly added in the comments that her exact due date is November 24, and it’s not too hard to do the conception math and realize that the February photo would have been just before Lilly conceived.

UPDATE – Lilly reached out to us to clarify that she and Lawrence have been dating for roughly a year and a half. She says that they decided to not share their relationship publicly.

Lilly’s pregnancy reveal shocked a lot of her followers, but her comments section was flooded with positive and joyful messages of congratulations — including several from other Unexpected moms. Her Season 1 co-star McKayla Adkins shared the “🎉💙” emoji response and Lexus Scheller wrote: “OMG congrats mama!!! So happy for you 💞”

One commenter asked Lilly how her mother Kim was handling the news. “She’s excited!!” Lilly responded. Lilly’s brother Thomas was also thrilled. “I get to be an uncle to another sweet baby!” he wrote on Facebook after Lilly’s announcement. “And this time, it’s a boy!! I have the coolest uncles on planet Earth, so I’ve got some big shoes to fill! 😁 🥰”

Fans will recall that Lilly was just 16 when she got pregnant the first time. She and her boyfriend James welcomed their daughter Aaliyah Rose on September 4, 2017. It’s unclear just what the co-parenting relationship is between Lilly and James when it comes to Aaliyah. The two have been a little snarky towards each other on social media since early last year, but it doesn’t appear to be to acrimonious.

I can’t believe it’s been 2 years since you came into my life and made me a father I love you more than words could ever describe you made me shape up into a man daddy will always be here for you always! I love you happy birthday stink ❤️😘

Unexpected Season 1 featured just three teen moms: Lilly Bennett, Lexus Scheller, and McKayla Adkins. Lilly did not return for Season 2, Lexus did not return for Season 3, and McKayla announced earlier this year that she has not been filming for season 4. That would mean that the extremely popular reality series will have turned over the complete cast, which is a very different take on the concept from MTV’s Teen Mom franchise.

#Unexpected @Chloe_Mendoza_ announces that she will 99.99% not be back for Season 4 as she reflects on the positives and negatives of being on the show for two seasons https://t.co/Hp5ZDVu70m

Although lots of viewers were upset to see the moms return, the ratings indicate that they do like how producers continue to introduce new cast members with new story lines each season. Given how popular the show has become (it is currently getting more “live plus same day” viewers than any of the Teen Mom shows), I wouldn’t be surprised if TLC announced a new spin-off in which they follow up with former cast members on a new series. By my count, they have six moms to choose from at this point? It seems like a no-brainer to at least give it a shot.