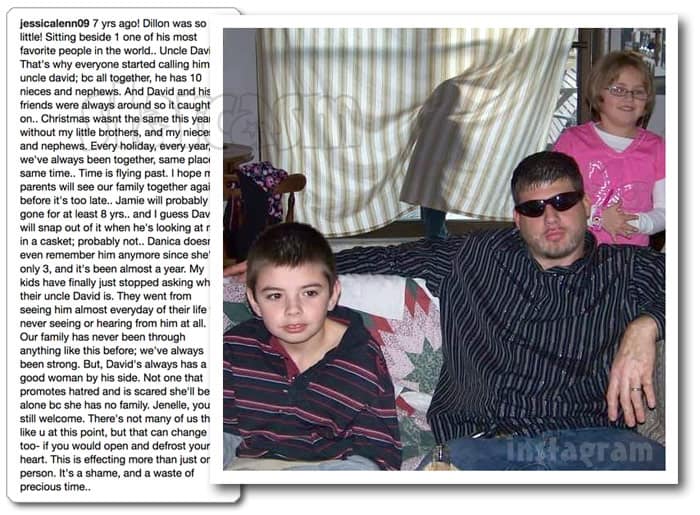 Jenelle Eason’s sister-in-law Jessica posted a throwback photo of her brother David Eason on Tuesday and revealed that her children haven’t seen their “Uncle David” in almost a year because of their falling out. She also misses her other brother, James “Jamie” Eason, who is currently serving time in prison for breaking and entering and burglary.

“7 yrs ago!” Jessica began her caption for the photo above, which features David Eason (wearing sunglasses and a wedding ring) sitting on the couch with his nephew Dillon. “Dillon was so little!” Jessica continues. “Sitting beside 1 one of his most favorite people in the world.. Uncle David..”

Jessica explains that everyone started calling David “Uncle David” because he has ten nieces and nephews altogether. “David and his friends were always around so it caught on.”

Here is more from Jessica, who is deeply saddened by the absence of her two brothers and their families:

Christmas wasnt the same this year without my little brothers, and my nieces and nephews. Every holiday, every year, we’ve always been together, same place, same time.. Time is flying past. I hope my parents will see our family together again before it’s too late.. Jamie will probably be gone for at least 8 yrs.. and I guess David will snap out of it when he’s looking at me in a casket; probably not.. Danica doesn’t even remember him anymore since she’s only 3, and it’s been almost a year. My kids have finally just stopped asking where their uncle David is. They went from seeing him almost everyday of their life to never seeing or hearing from him at all. Our family has never been through anything like this before; we’ve always been strong. But, David’s always has a good woman by his side. Not one that promotes hatred and is scared she’ll be alone bc she has no family. Jenelle, you’re still welcome. There’s not many of us that like u at this point, but that can change too- if you would open and defrost your heart. This is effecting more than just one person. It’s a shame, and a waste of precious time..

Jessica’s Christmas post comes less than a week after her irate direct message exchange in which she called Jenelle a s|ut and joked about the number of abortions Jenelle has had.

Meanwhile, Jenelle and David shared family photos from their Christmas trip to Grandfather Mountain in western North Carolina. David and Jenelle had their entire family along for the trip, including Jace, Maryssa, Kaiser, and Ensley: 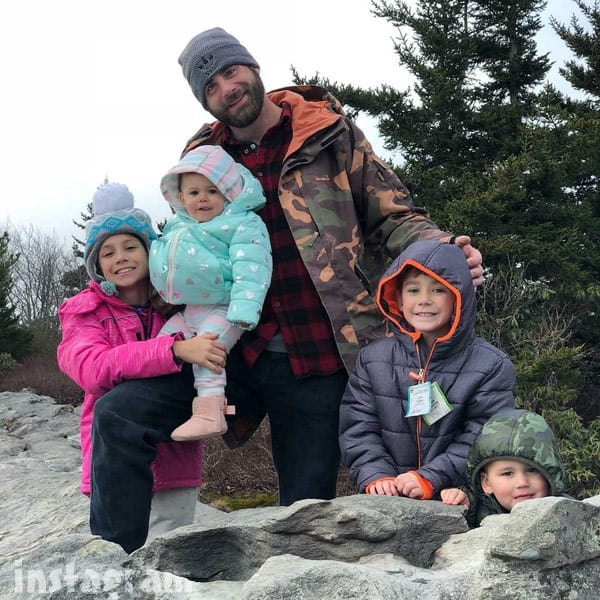 And here are some more photos from the Eason family Christmas trip from their Instagram galleries, as well as some photos of the kids opening presents on Christmas morning:

* I’m not sure why, but all of Jenelle’s embeds come out formatted a bit funky in some browsers. I tried to figure out a fix but had no luck.

“Always take the scenic route…” ??? We made it to the top of a mountain with 3 kids and the baby! So happy the entire family was here this trip! #GrandfatherMountain #FamilyVacay #Goals ❄️?

They have the strongest love ever! ?? #Brothers #Hiking

If you only knew how much these simple moments mean to me, Little Mama. ?❄️ #FirstTime #Mountains #Adventurer

Surprisingly, Jenelle has remained quiet on social media about Jessica’s recent outbursts. It seems this Christmas she is taking the high road — literally and figuratively! 😉

Spare Parts: A dedication to the moms of Teen Mom 2