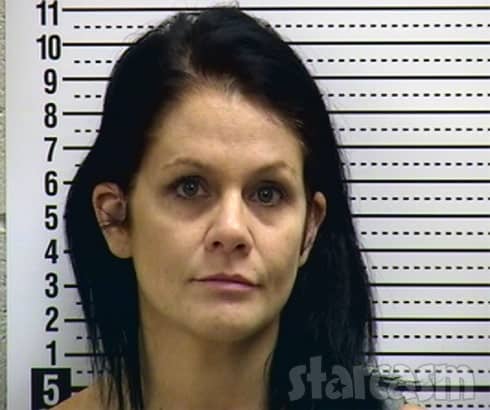 Brunswick County Police were once again playing six degrees of Jenelle Eason this week as the Teen Mom 2 star’s sister-in-law Jessica Eason was arrested and charged with felony possession of a controlled substance.

According to online records, 38-year-old Jessica was booked just after 3AM Monday morning and is already out after posting a $5,000 bond. The official charge is felony possession of a Schedule II controlled substance, which have the following characteristics:

Has a high potential for abuse.

Has accepted medical use with severe restrictions.

Abuse may lead to physical or psychologial dependence.

Some examples of Schedule II controlled substances include cocaine, raw opium, opium extracts – fluid and powder, codeine, hydrocodone, morphine, methadone, methamphetamine, Ritalin, and Adderall. According to this document detailing the North Carolina schedule system, possession of a Schedule II controlled substance is a misdemeanor charge for the first offense, but that is bumped up to a felony charge for the second offense.

Jessica has yet to respond to the arrest publicly on social media, and neither has Jenelle. It is the second arrest this year for Jessica, as she was previously booked back in January on an assault charge.

UPDATE – There is a text message allegedly from Jessica circulating on Facebook that offers an explanation. According to the unverified text, Jessica was in court earlier this year for a failure to appear stemming from a speeding ticket. When she was searched, they found an Adderal in her pocket and despite her claim that it was hers, a warrant was later issued because it wasn’t in the container. The message claims that Jessica had a court appearance scheduled for today to prove that she did have a prescription.

There is an unverified Twitter account for Jessica (started back in September) that shared a similar account of what happened in reaction to a screen cap of what appears to be a deleted Facebook post by her brother David about her arrest:

This liar right here… I had adderall in my pocket instead of in it's original container. I have to show proof in court today. That's it!! Unlike him and his nasty bitch of a wife! Im not defending him anymore. That's it! Grow up David!

If you’re wondering why Jenelle would respond to Jessica’s arrest, that’s because the two have engaged in some VERY brutal online feuding with some very crazy allegations. Here is how we introduced their feud in our post about Jessica calling Jenelle a s|ut while attacking her for having abortions:

David Eason’s sister Jessica has rekindled her public feud with her sister-in-law Jenelle Eason, nearly seven months since a cease fire was called after a brutal series of exchanges that included allegations of drug abuse, a Xanax-induced school bus crash, and the meme-inspiring use of the term “mud duck.”

And here is a link recap of their feud — we will update if this latest arrest reignites their conflict: 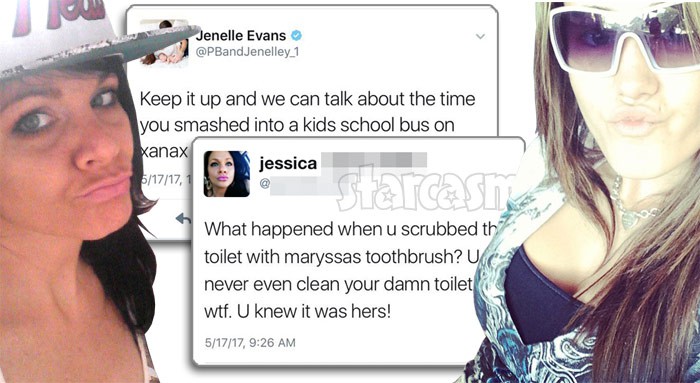 Jenelle and Jessica Feud Part Two
The gals post each other’s phone numbers online, Jenelle brings up Jessica’s son with Cerebral Palsy, and we have the first use of the term “Mud Duck.”

Jenelle and Jessica Feud Part Three
Jenelle mentions the time that Jessica “smashed into a kids school bus on xanax,” the first and only mention of the now-infamous weed gummy, and both sides of the “Jenelle used Maryssa’s toothbrush to clean a toilet” story.

Jenelle and Jessica Feud Part Four
Maryssa’s mom Whitney attempts to join in (on Jessica’s side), Jenelle’s PR Twitter account accuses Whitney of drug abuse and having sex with “old guys” for money, and Jessica says Maryssa did not write the loving Mother’s Day note posted by Jenelle on Instagram.

Jenelle and Jessica Feud Part Five
Jessica calls a cease fire and explains her reason: “im trying to please my parents and the rest of my family!”

Jenelle and Jessica Feud Part Six
Jessica attacks Jenelle for being a s|ut and having so many abortions. An excerpt: “[Jenelle] talks sh!t bc I have a lot of kids. Well that’s bc I don’t do abortions.. That b!tch dunnen bought 1000 shares in 25 abortion clinics, got her own bedroom at half of them w her name on the headboard, they know her by name when she walks in…”