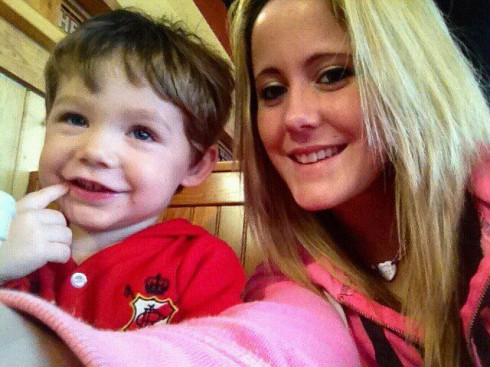 In 2012 Teen Mom 2‘s Jenelle Evans has been to jail twice, and had lots of public, online drama with her former boss James Duffy and ex-roomate Hannah Inman. There’s a long story behind all this drama (you can read our reporting on it here,) but in a nutshell James Duffy released photos of Jenelle drinking, and images of text messages that were supposed to be from Jenelle. Jenelle pressed cyber stalking charges on Duffy, and then Hannah pressed harassment charges on Jenelle, then pressed charges on Jenelle for allegedly violating her probation order. The second time Jenelle was arrested (for allegedly violating Hannah’s domestic violence protective order), she had to stay overnight in jail. Jenelle and her lawyer believe that these charges have no basis, and were made her against her to get her back for filing charges against James Duffy. She says she hasn’t contacted James or Hannah in a month, and that she couldn’t harass Hannah over the phone because Hannah doesn’t currently own a phone.

“I actually am confused about the arrest from last week. I haven’t contacted Hannah or Duffy in a month, and I was the first to press charges, so I think they are trying to charge me with things out of spite.

Hannah does not own a cell phone either so there’s no way I could of harassed her with phone calls. I never threatened Hannah. I guess she claims I’m a threat to her, which makes me laugh, because I moved 45 minutes away from her three weeks ago to get away from the drama and be closer to school.”

After her latest arrest, (which Jenelle has taken a break from her prolific Twitter and Facebook updates, and now has a representative managing those accounts until her probation is finished April 2012. Starcasm, however, was able to talk to Jenelle, and we have some updates about what’s going on in her life.

First of all Jenelle has been in and out of hospitals all month because of an ongoing case of mono, and has several cases of strep throat. Most recently, a few minutes ago Jenelle made a rare tweet: “hospital suck,” so we assume she’s sick enough to be admitted again.

When Jenelle was feeling better, she was attending night classes at Miller Motte Tech College for Medical Assisting. Jenelle is working hard, and is really enjoying her schoolwork and teachers:

I LOVE IT !!!! its very interesting and not boring to me at all. all my teachers are so caring and great motivators and just want you to succeed in life. :]

Jenelle is also spending a lot of time her her new boyfriend Gary Head, and her son Jace. Jenelle says that “Jace and Gary both like each other a lot,” and Gary is a great role model for Jace. They like to do fun things together like ice skate, and recently went to the “gymnastics studio to play on trampolines and the big foam pit.”