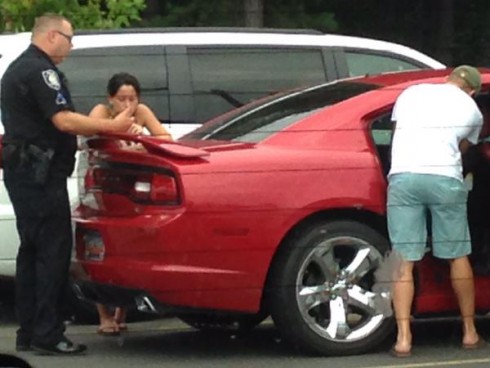 After photos of Jenelle Evans consulting with a police officer were shared on Twitter earlier today, rumors that cops were called on her and Nathan Griffith for fighting in public began. However, Jenelle says that is far from the case — and that she and Nathan were actually the victims of a random crime.

“That person followed me into the myrtle waves parking lot then hit my car on purpose with both children inside,” Jenelle responded to someone on Twitter after people claimed she was the one arrested. “They were at fault and it’s being taken care of.”

She elaborated to us that the man who hit her car apparently has a bad case of road rage.

Jenelle said that as she turned into a parking spot, the other driver seemed to purposely hit her car.

Jenelle said the argument escalated to the point that the man’s wife “almost swung on me” and he told her “you deserve to die.”

Fortunately, a Myrtle Waves worker intervened at that point and sided with Jenelle.

“[He] said he saw the entire thing and they should not have been following me whether they were mad or not,” she said.

As Jenelle said, the good news is that no one was injured.