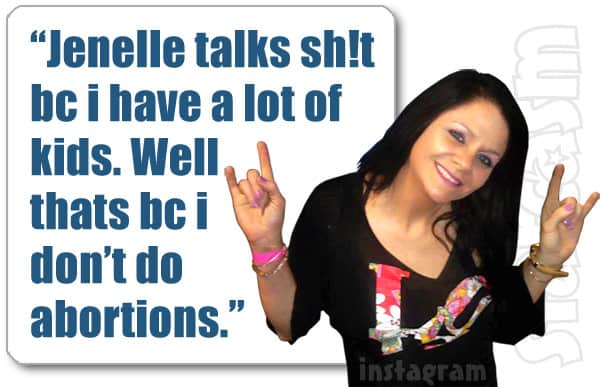 David Eason’s sister Jessica has rekindled her public feud with her sister-in-law Jenelle Eason, nearly seven months since a cease fire was called after a brutal series of exchanges that included allegations of drug abuse, a Xanax-induced school bus crash, and the meme-inspiring use of the term “mud duck.”

The first salvo in the latest public skirmish between the J gals came from Jenelle, who tossed the entire Eason family under the bus while talking about her husband David’s thyroidectomy on Twitter. “Uhm… he had a thyroidectomy, why do you think he has a scar across his throat?! He just doesn’t scream it out to everyone. It’s scary for us to deal with,” Jenelle wrote. “Sure… he had radiation therapy,” she added, “of course none of his family was there helping him either going through this. If you only knew the truth.”

Jessica expressed her frustration over Jenelle’s since-deleted diss in a text message conversation with a follower later posted on Twitter:

Tell that dumb b!tch that I said in 2013 when David got his surgery she didn’t even know him and he was with his family. us .. his real family while she was out spreading her legs like f**king Twizzlers making babies to make money we were a real family. His family has always been there for him and through all of that.

It’s pathetic how jealous she is just because she doesn’t have any family and all her family hates her. Well guess what all my family hates her too and that’s why she doesn’t want David to have family because then she’ll be a lonely little ugly b!tch. It must be nice to have my mama raising her kids so that she can go out and party every weekend and all week long While She lays on her lazy a** doing nothing.

In another alleged text conversation with another person Jessica met via social media (???), she attacks Jenelle by accusing her of being a s|ut and having numerous abortions in a rather distasteful (to say the least) rant. She concludes the conversation by telling the person she is welcome to post what she wrote on reddit, and the person did exactly that. Here is the screen cap of the conversation followed by a transcript: 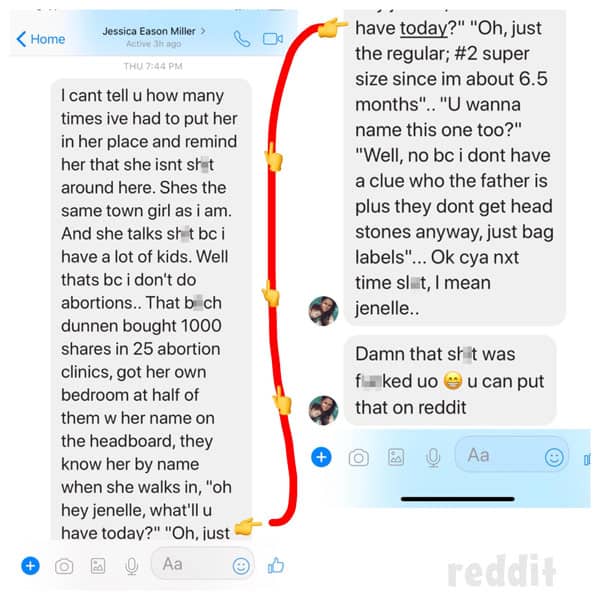 I can’t tell u how many times ive had to put her in her place and remind her that she isnt sh!t around here. Shes the same town girl as i am. And she talks sh!t bc I have a lot of kids. Well that’s bc I don’t do abortions.. That b!tch dunnen bought 1000 shares in 25 abortion clinics, got her own bedroom at half of them w her name on the headboard, they know her by name when she walks in, “oh hey jenelle, what’ll u have today?” “Oh, just the regular; #2 super size since im about 6.5 months”.. “U wanna name this one too?” “Well, no bc i dont have a clue who the father is plus they dont get head stones anyway, just bag labels”… Ok cya nxt time s|ut, I mean, jenelle..

Damn that sh!t was f**ked uo ? u can put that on reddit

Surprisingly, Jenelle (and her @JenelleEvansPR Twitter account) have remained silent about Jessica’s latest rants. Some may speculate that her silence is because she is dealing with her split from husband David Eason over the Jenelle” Ex-Files MTV special, as reported by Radar Online, but someone asked Jenelle tea guru The Ashley about the break up rumors on Twitter and The Ashley casually swatted them away:

I simply cannot imagine Jenelle being able to remain silent for very long, so stay tuned! While you wait, be sure to check out out blow-by-blow coverage of Jenelle and Jessica’s previous EPIC feud from back in May. Here are some links and episodic synopses:

Jenelle and Jessica Feud Part Two
The gals post each other’s phone numbers online, Jenelle brings up Jessica’s son with Cerebral Palsy, and we have the first use of the term “Mud Duck.”

Jenelle and Jessica Feud Part Three
Jenelle mentions the time that Jessica “smashed into a kids school bus on xanax,” the first and only mention of the now-infamous weed gummy, and both sides of the “Jenelle used Maryssa’s toothbrush to clean a toilet” story.

Jenelle and Jessica Feud Part Four
Maryssa’s mom Whitney attempts to join in (on Jessica’s side), Jenelle’s PR Twitter account accuses Whitney of drug abuse and having sex with “old guys” for money, and Jessica says Maryssa did not write the loving Mother’s Day note posted by Jenelle on Instagram.

Jenelle and Jessica Feud Part Five
Jessica calls a cease fire and explains her reason: “im trying to please my parents and the rest of my family!”

Lady Gaga accuses Perez Hilton of stalking her, trying to move in next door to her