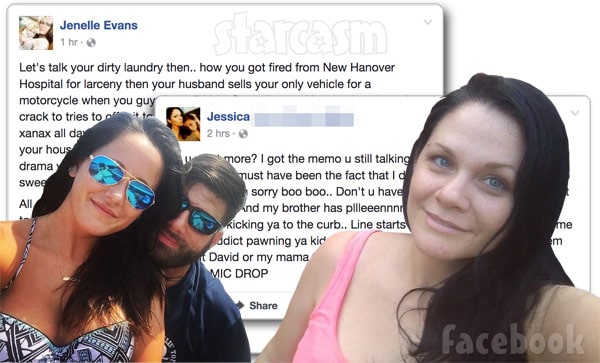 Teen Mom 2 star Jenelle Evans looked to be in one of her longest stretches of relatively drama free living as she and fiance David Eason continue to live out their fairy tale happy ending with a new home and a new baby. That peaceful stretch appears to now be over, however, as Jenelle is currently battling it out on Facebook with her future sister-in-law Jessica in a vicious war of words that includes allegations of drug use, larceny, and…hand-me-down clothes?

The feud started with very little context and no names being mentioned, so let me set it up with a narrative pieced together after the feud escalated. David’s sister Jessica recently met with his ex, Olivia Leedham, and his son Kaden — whom David is currently battling to gain visitation rights with. (You may recall that David was arrested last year after he hugged his son at a grocery store because there was a protective order in place preventing the father and son from having contact.)

After Jessica’s visit with Olivia, Jenelle apparently texted Jessica to let her know the meeting was not something a good sister would do. (I assume the language was a little more R-rated than that.)

UPDATE – After Jenelle’s texts, Jessica apparently joined a private Teen Mom Facebook group and made numerous posts putting Jenelle down. It is our understanding that Jenelle was aware of these posts, and they helped fuel the rapid escalation on their public pages.

OK, that should have us all set up for the following Facebook posts, which are arranged chronologically:

JESSICA: I should have listened! You all were right.. She IS crazzzzyyyyy! ?

COMMENTER: Well whoever it is I hope they realize you aren’t the person to be f**ked with.. Prayers stay strong stay shining as you always do..

JESSICA: To clarify, I love my dearest little brother David.. I love his children Kaden, Maryssa, Ensley, along w Kaiser and jace. I hope this passes for the sake of our close knit family, as we have always been a close family. Ups and downs here and there, which is normal. If people want to be petty and not see the big picture of my actions to benefit our family.. Then please, have several seats. And you WILL NOT BE DICTATING what happens in this arrangement, trust me sweetie! And the insults only make me lmao.. You are farrrrrrr from the boss in this area code baby girl.. This isn’t MTV sweetie.. And Youre nobody around here 😉 #nottheshotcaller

COMMENTER: It is what it is..
Some people need the truth slap in their face in order to understand.. An everyone has their way of doing things..
I hope yall can over come this an get back to the most important thing of all Family!!

JESSICA: If she would like to bow down to me and apologize to this QUEEN B… I just MIGHT forgive her 😉

This isn’t about my mom.

JENELLE: Next time don’t text david asking to bail out your baby daddy. ? maybe that’s why she’s so mad.

Mannnnnnn… I love owning my own home, not having any legal charges, and a closet full of nice shoes I paid for too.

JENELLE (in the comments): No one knows what I’m talking about but she does lol someone will rely the message I’m sure

JENELLE (in the comments): Lmao I mean I gave her my old clothes and stuff too… I don’t get it

JESSICA: Ok u want more? I got the memo u still talking.. Ya Smoked weed while pregnant….It must have been the fact that I didn’t like half the tasteless crap u gave me.. I’m sorry boo boo.. Don’t u have some rehab and custody court to attend to? And my brother has pllleeennnntyy of females STILL asking when is he kicking ya to the curb.. Line starts here >>>>… Don’t come at me ya drug addict pawning ya kids off left and right cuz you can’t handle them without David or my mama there to help u outta bed! Now shut up…. Oh yasss… MIC DROP

JESSICA (in the comments): Who wanna buy her maternity dress huh?? I sholl don’t want it! 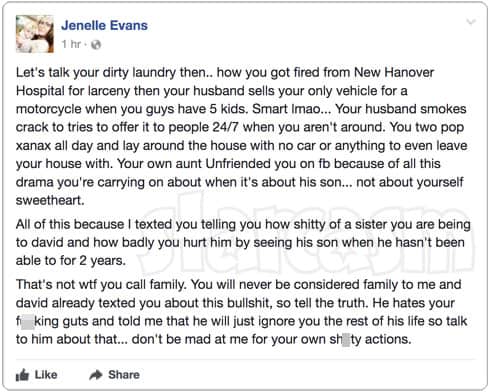 JENELLE: Let’s talk your dirty laundry then.. how you got fired from New Hanover Hospital for larceny then your husband sells your only vehicle for a motorcycle when you guys have 5 kids. Smart lmao… Your husband smokes crack to tries to offer it to people 24/7 when you aren’t around. You two pop xanax all day and lay around the house with no car or anything to even leave your house with. Your own aunt Unfriended you on fb because of all this drama you’re carrying on about when it’s about his son… not about yourself sweetheart.

All of this because I texted you telling you how sh!tty of a sister you are being to david and how badly you hurt him by seeing his son when he hasn’t been able to for 2 years.

That’s not wtf you call family. You will never be considered family to me and david already texted you about this bullsh!t, so tell the truth. He hates your f**king guts and told me that he will just ignore you the rest of his life so talk to him about that… don’t be mad at me for your own sh!tty actions.

JENELLE: I try to put myself in other people’s shoes, but sometimes I can’t #Truth ??‍♀️

JESSICA: I mean they both look like zombies on camera obviously since jenelle hospital shops for nerve pills.. Seen in w my own eyes while I was working at NHRMC! She’s pathetic. My brother deserves better and ill take names and numbers for volunteers 😉 she deserves the crack life style she has become accustomed to.. Barely able to speak and searching for her next fix. Gross

JENELLE: Wait .. I thought u and your brother were cool according to you? Now he’s on drugs? ?

JENELLE (in the comments): Lmao yeah she doesn’t now what she’s saying cuz she’s probably all messed up as we speak

Nobody babysits my children but Davids mom. Other than that she has came over to visit maybe once or twice when she wants to know drama https://t.co/3iWIQEd1IM

His other sister has babysat before but never this crazy one lol https://t.co/3iWIQEd1IM

UPDATE – The feud continues! Click the link for all the latest drama, including more insults, Jenelle and Jessica’s phone numbers being posted, and someone being called a “mud duck.”