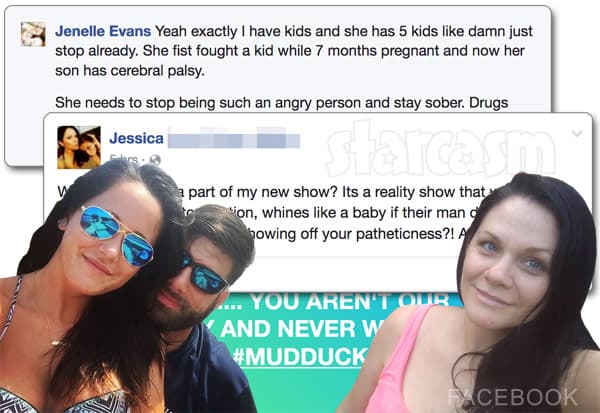 In case you missed it, the whole thing started when Jessica met with David Eason’s ex Olivia and their son Kaden as a precursor to David finally getting visitation with him. It seems that Olivia and Jessica are close friends, and Jessica says it is Olivia’s choice to get Kaden acclimated to the new visitation arrangement through Jessica. This DID NOT sit well with Jenelle, who apparently sent an angry text to Jessica about it.

That’s when the social media feud started, which included allegations of drug abuse by both ladies in what appears to be a tug of war for David Eason’s favor.

The tug of war has continued after our initial post, and we will once again try to piece together the disparate drama in a single narrative. The latest round seems to have started after David’s other sister, Amy, shared a lengthy post about the importance of family:

Family… it isn’t just people you are stuck with because you were born there… it’s a bond like no other… siblings grow up together, playing, laughing, talking, loving, protecting, sharing, amongst a host of other things… when you grow older, you change and grow in your own way, but, that strong core of eternal friendship is still there… things will happen, such as misunderstandings, miscommunication, arguments, etc… but when you value that true friendship in one another and the purest love on earth, talk to each other… work things out… listen and communicate… nobody on earth will ever replace that person and when the day comes that you lose one of them, you’ll look back and think, “I wish I would’ve said ______, or done ______.” Don’t live your lives in the thoughts that everyone will be here forever, cause they won’t… life is entirely too short to waste on unnecessary arguments… don’t let others influence your thoughts and/or actions against your family… family is the strongest and purest form of love and bond there is… when all else fails, who’s gonna be standing there with open arms? Your family.

April’s post put Jenelle on the defensive. “Think about your actions wisely before losing your entire family,” Jenelle wrote on Facebook. “#FamilyFirst not #FamilySecond … there’s a huge difference. April”

That sparked this reaction from Jessica:

JESSICA: Does this makes sense to anyone? We have our family. April David Amber and Jamie are our family. And Ensley is my niece. Youre the one losing Jen!

COMMENTER: Shes giving ppl lessons on chossing their actions wisely LMAO. What family does she have? Her mom & sister cant stand her. And her bro uses her fame to hook up with girls 😛 Jenelle door step got a mile high of sh!t piled up #LiarLiarPantsAreOnGotDamnFire

JESSICA: Girl I could say some stuff but ima back off the Lil ho for now.. But if I see another negative word out that things mouth or finger tips.. It will be #onlikedonkeykong

JESSICA: Did she think MY sister April Marie was gonna say something nice to her? Hahahaha

JESSICA: She is highly fed up w it.. And she’s trying to make it stop. April Marie makes me look like an angel.. She is restraining 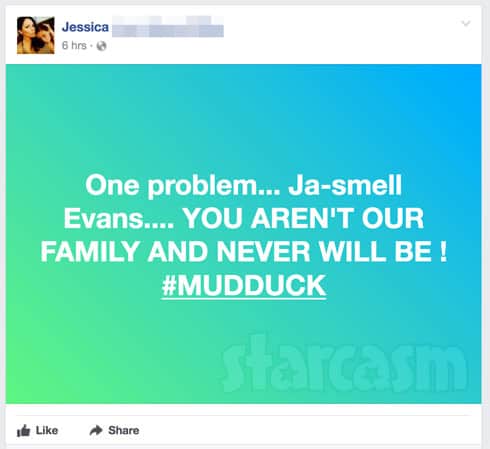 For those of you curious (like me), here are a couple definitions for “Mud Duck” from the Urban Dictionary:

An atrocious-looking female. This girl has to be so horrible that she doesn’t even qualify as a duck.

A white chick who births multiple interracial babies with men who will never be a father to or pay support for them.

In the comments section of the Mud Duck post, Jessica was asked “what happened?” and she provided a recap, albeit one that is a bit jaded in her favor:

JESSICA: Olivia and Kaden (my nephew and his mom) came to visit and Jenelle got so jealous she’s on oxygen ? but seriously. Then in retaliation she begins posting a bunch of weird sh*t!

COMMENTER: Shes always played games like a school girl. Don’t expect it too change, EVER.

COMMENTER: She aint sh!t anywhere else either , but a damn vindictive child

COMMENTER: All that money got to her she forgets where she came from!

COMMENTER: Damn. That’s a shame. I bet david was glad to see his son….hes wanted that for so long now. I hope it all works out. For David’s sake.

JESSICA: It was just us this time for him to get reacquainted but she got jealousssss and started a war that she will lose!

COMMENTER: It’s a damn shame so David will be aloud to see Kaden at your place that’s soo awesome!! She needs some serious help its not healthy..

COMMENTER: She has to know that his kids are just as important as hers….he needs to have a relationship with him. It’s just so sad. She has to accept it.

JESSICA: I thought I was doing something good for us.. But poor cry baby couldn’t take it. David told me to participate and be very respectful. Was I supposed to not let them in for Jenelles sake? Nahhhh

COMMENTER: Currently Jenelle ? (with the photo below) 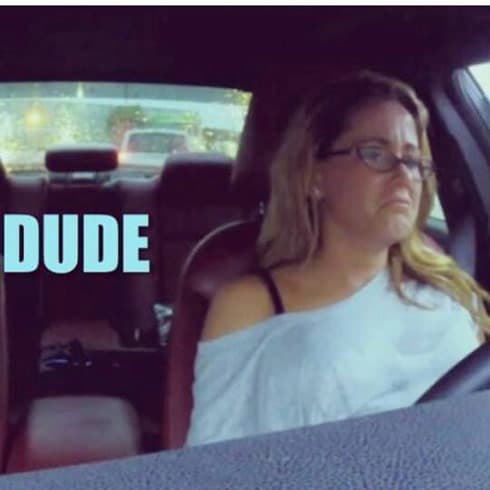 JESSICA: Lmmfao!!!!!! Omg duudddeee David is like sooooo much better with my kids than any of allllllllll my other boyfriends I’ve had … Wow.. (Did u really just say that?)

JESSICA: All she has to do is bow down and call me the queen and I might forgive her. Maybee

Jenelle’s official fan page (with the blue check mark) then shared a link to a story about the feud along with the caption “Im done.” 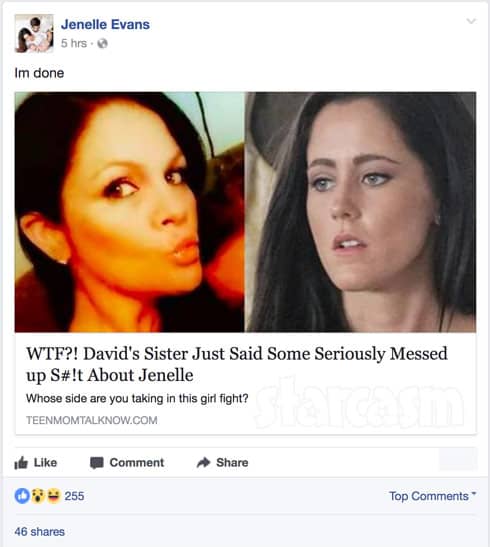 JESSICA: Cool.. If Youre really done, then shut up. Im the Queen, not u.. #betterasksomebody babe… Signing off for now! Love u all!

JESSICA: Im so burnt out with this female im bout to go spray myself w the dang waterhose

COMMENTER: I was just about to pm you that now so called sources are saying your looking for money.. smh wow..

JESSICA: I don’t care what they say.. They messaged me asking a millions questions and im not giving it to them!

Shortly after, there was this new post from Jessica:

JESSICA: All this over me seeing my nephew and his mama. We are doing visits soon so yes he needs to be around us. David wanted that. Jealous bitty.. Ill invite them NOW if I want to.. And maybe even laugh our asses off at u!

COMMENTER: Jenelle doesn’t like it when he isn’t the centre of attention. Scald that b!tch JESS!!! ???? What she NEEDS to worry about is getting her train wreck of a life ON TRACK!!!

JESSICA: Oh and she texted me that she would fix it where the visits wouldn’t be here, sorry but that was already set in stone. And Olivia makes that decision. David if u wanna come to your senses and act like u have some damned sense, we can stop all this foolishness!

JESSICA: Who wants to be a part of my new show? Its a reality show that will involve moms barely able to function, whines like a baby if their man doesn’t watch her kids, and basically just showing off your patheticness?! Anyone?

COMMENTER: This is what she does to all of her boyfraaaaans. She claims shes “changed” yet carries on all the same damn behaviors. The only thing shes changed is her damn underwear. I hear sometimes she doesn’t even do that ???

A commenter shared Jessica’s sarcastic comment about her own reality show on Jenelle’s Facebook page, and Jenelle clapped back:

JENELLE: She’s always wanted to be “on tv”. Maybe that’s why she’s mad. Davids brother and her have been asking david when they can film and they should have their own show. Her saying this doesn’t even surprise me.

COMMENTER: That girl needs a life she is only trying to get under ur skin ignore her it will stop some time but if u keep posting stuff about it she’s gonna continue jus ignore her ugly ass that looks like she’s on dope an she will stop

JENELLE: Yeah she must be on xanax being as angry as she was in my voicemail lmfao

COMMENTER: U should post is all over if she starts on ur lil baby that baby don’t need to be apart of her u can stop that

COMMENTER: As I seen David’s sister, screen shots of all your stuff and posting all this nonesence about you. It’s pretty fking low! I don’t know the whole story, but if David wants to see his child he will, wtf does it have to do with bringing you down.. I feel so bad for people like this, I’ll pray for her… She’s making this all about her! Stand your ground Jenelle. As for her telling everyone your a drug addict, is fking low… Maybe Mtv will blast this b!tch and put her in, her own darn shoes… Fking smucks these dayzzz

JENELLE: She just called me threatening to fight me and her husband is threatening david… all trash.

COMMENTER: Omg! And this b!tch claims to be a great mother? Babahaha, take the trash to the curb :p

JENELLE: Yeah and we’ve told them to stop calling and texting us harassing and making threats and they won’t stop. It never ends.

JENELLE: She’s acting all mad cuz there’s an article on my fan page written about her… I don’t run my fan page or write any of those articles lmao not even the captions so she can assume and look like the idiot

JENELLE: I don’t want to get into any trouble and def not fighting anyone after previous girls lol soooo yeah idk might

JENELLE: She will be very butt hurt when she’s not invited to the wedding and everyone else gets to go

COMMENTER: I’ve seen videos of you curb stomping a b!tch… Lol, some of us grow up though ?

COMMENTER: I wouldn’t​ invite a douche bag like her to a wedding either

JENELLE: Yeah exactly I have kids and she has 5 kids like damn just stop already. She fist fought a kid while 7 months pregnant and now her son has cerebral palsy. She needs to stop being such an angry person and stay sober. Drugs make everyone so angry it’s crazy.

The timing is unclear because it was quickly deleted, but at some point Jenelle shared a video on Snapchat playing back a voicemail message from Jessica in which you could clearly see Jessica’s phone number. I’m not sure if the voicemail is the one Jenelle describes above in which she claims Jessica threatened her and David, but Jenelle captioned the photo with “Someone’s mad.”

UPDATE – Some heroic fan on reddit transcribed the voicemail message from Jessica, which was apaprently left for David:

All that sh*t that jenelle told you that I said is what that b*tch said and when I f**kin see her me and her are gonna have some f**kin words so you better tell that god d*mn little piece of sh*t sk@nk to get ready and guess what it don’t make you f**kin famous to be a sl*tty @ss little wh0re on camera it don’t make you f**kin famous b*tch you ain’t famous people laugh at your @ss behind your f**kin back you ain’t nothin but a F**KIN WH0RE!

[* I’m going to interject here and correct a common misconception: Yes, Jenelle IS famous — VERY famous. And that means that yes, Jenelle IS a celebrity — by definition.]

Jessica then posted this photo revealing that her phone was blowing up before getting into another discussion in the comments section: 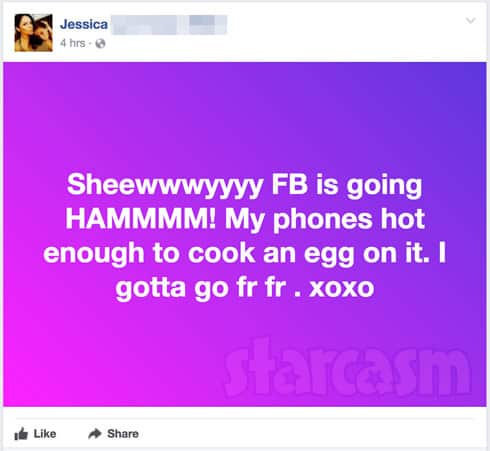 COMMENTER: how old is she

JESSICA: In her late 20s but she looks… Well seasoned ??

COMMENTER: What a dumb petty b!tch i guess she lookin for that ass whoopin..

JESSICA: She is BEGGGGGGINNNNNGGGG for it

JESSICA: Omg.. This was alllll started by her.. And continued by her.. Because she hates herself.. ?

Jenelle and Jessica both quickly changed their phone numbers.

Things seem to be quiet for now, but stay tuned…