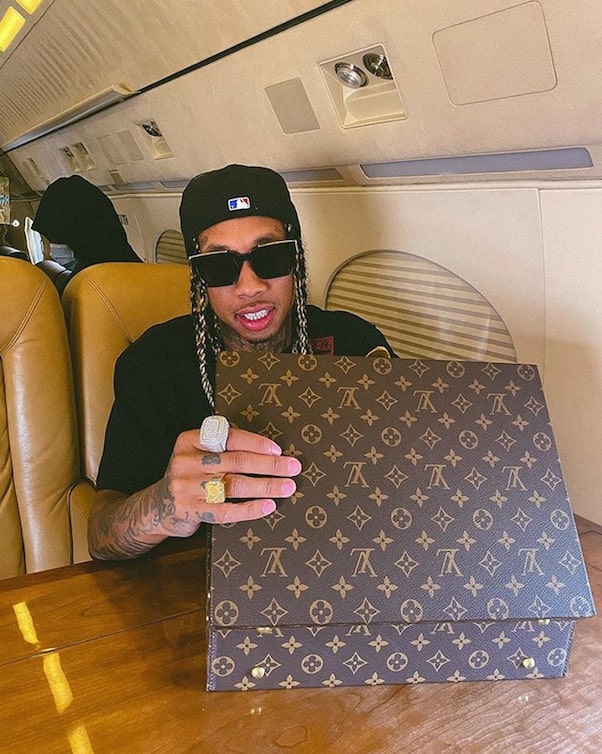 Just weeks after trying to tap those sweet OnlyFans checks, Tyga’s net worth appears to be shrinking yet again. *Another* landlord is suing Kylie Jenner’s 30-year-old ex-boyfriend for unpaid rent and damages.

Based on new reports, it sounds like Tyga’s cash problems never really went away. And while we can’t say for sure how much Tyga might be making from his full frontal pics, it seems a safe bet he’s bringing in far less than his top-earning baby mama Blac Chyna.

Tyga’s had a flashy lifestyle for years. Devotées of his story from back in his Kylie days will no doubt recall the parade of luxury cars, far-flung locales, and five-figure monthly rents.

And Tyga has had more than a few hits. (Though “Rack City,” released back in 2011, is probably still his most popular and best-known track.)

But it’s been hard to pinpoint the man’s exact net worth. The last time we tried, we pegged it at somewhere between $5 and $8 million dollars.

That estimate, though, is riddled with caveats. And most of those come in the form of late rent payments, along with legal fees from lawsuits stemming from unpaid bills.

For example, when we did try that estimate of his net worth, we also reported that Tyga was allegedly $500,000 in debt to Kylie Jenner. She was said to have been bailing him out of debts since shortly after they started dating.

In fact, Tyga’s most infamous run-in with unpaid bills came on Kylie’s 18th birthday. Back in 2016, he failed to appear in court after a former landlord sued him for approximately a year’s worth of unpaid rent — about $190,000.

Tyga’s absence led the judge to issue a $10,000 bench warrant for his arrest. Kylie came to the rescue, though, footing the entire $200,000 bill herself.

There was also the time Tyga stopped making payments on his Ferrari and had it repossessed. Somewhere in there was at least one more angry landlord (I’ve honestly lost track of them all).

Things got so bad that at one point, Kris Jenner allegedly took over bailing Tyga out. The logic was that if Kris was responsible for making his payments, Kylie wouldn’t have to testify against Tyga — or disclose any of his finances — should yet more matters go to court.

Tyga’s latest landlord drama looks like more of the same

By now, you’d think landlords would be extremely wary of renting to Tyga. His latest legal drama involving unpaid rent is either the fourth or fifth one Tyga’s been involved with in as many years.

According to TMZ, Tyga both ducked out on rent payments and did an estimated $170,000 worth of damage to the place.

That figure includes gouged white oak floors in the kitchen, “damaged marble flooring and counters,” and a whopping $103,160.25 charge for “damaged walls with murals and wallpaper.” I’m genuinely curious to know anyone could do six-figures worth of damage using only “murals and wallpaper.”

The landlord further claims that Tyga wrecked the driveway when he had a basketball hoop put in. *And* Tyga apparently had new locks put in — can renters even do that? — which “destroyed the entry door.”

Mike Trauben, Tyga’s lawyer, called the landlord’s claims “categorically frivolous” and accused the guy of just trying to get Tyga to stop hounding him for his security deposit.

Once the story broke, Tyga took to his Instagram stories with a collection of footage of *some* nice apartment, adding a few trolling messages to each new shot.

Over the first two, he wrote “Where the damage” and “People gotta stop w the lies”: 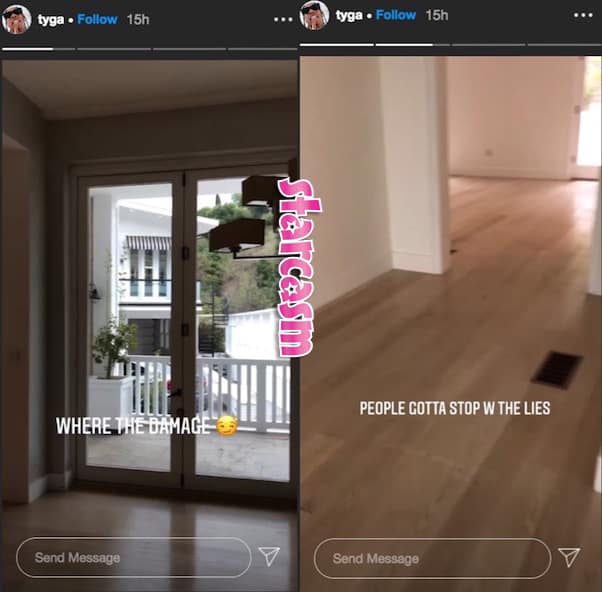 And in the second pair, Tyga wrote, “Looks nice to me” and “Don’t play yourself,” the latter accompanied by a Mr. Clean emoji: 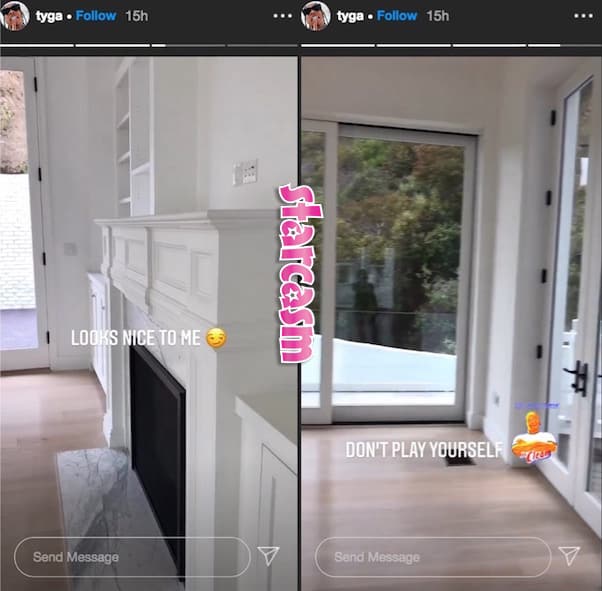 Of course, one thing Tyga didn’t include was proof that the footage was both a) of the rental in question and b) taken after he had already moved out. It could just as easily have been footage he filmed before moving in.

(It might be nothing, but we’ll also point out that the figure reflected in the glass in the fourth image definitely doesn’t look like Tyga.)

To be fair, we should also point out that things haven’t always been bad for the Tygster and his cash.

There was one time back in the day, not too long before their final breakup, when he’d allegedly proposed to Kylie. In order to prove he was serious, Tyga paid a Beverly Hills jeweler the $100,000 a court had ordered him to pony up…and Tyga did that with his own money.