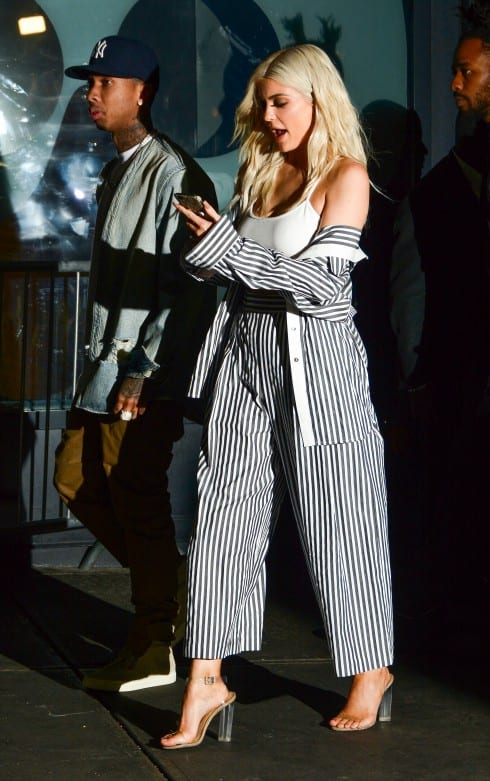 Speculation about the immediate status of Kylie Jenner’s womb is at an all-time high, thanks mostly to the unending belief that she’s never more than one questionable decision away from an accidental impregnation by Tyga. In fact, Kylie apparently welcomes an “accidental pregnancy,” according to an insider who claims to have close, personal knowledge of the 19-year-old makeup mogul and the way her mind works. Earlier this week, the friend went on record saying that Kylie isn’t *trying* to get pregnant, but, if it happens, she is “totally fine with that.” Last week, the big rumor was that Kylie and Tyga had already gotten married, in a top-secret, supremely quiet wedding, because Kylie Jenner is well-known for keeping things quiet and doing them as low-profile as possible. (Though the wedding reports did dovetail with separate allegations that she had refused to make Tyga sign a prenup, which, given we know about their relationship, does make a strange sort of sense.)

At the same time, a new Inquisitr report claims that Kylie changes her mind about pregnancy–though not about her boyfriend–almost as often as she changes clothes. “She changes her mind on him all the time,” said a source. “New week, new mentality.” The source did not go on to point out that Kylie and Tyga have broken up and gotten back together three times in the past eighteen months. “Kylie has pictured marriage and kids before,” the source concluded, “and thought it would be great with Tyga.”

Complicating matters of late is the belief that Kylie’s mom Kris Jenner has been paying Tyga’s legal bills and paying off his debtors in an effort at keeping Kylie off the stand, should she be called upon to defend him in court. Eyebrows went up across the internet earlier this week, when it was revealed that Kylie is expected to take the stand in Tyga’s defense at some point this fall; if she does, her testimony might constitute the first on-the-record statements about how much money she’s spent on his legal bills and repossession fees since they began dating. A recent Gossip Cop report does state flatly that Kris has made no such payments on Tyga’s behalf, and is apparently not worried about any testimony Kylie might give. Such reports are “ridiculous,” according to a rep for Kris who spoke to the publication.

We do know that Kylie’s (presumably) been bailing Tyga out for the better part of a year, thanks to frequent lawsuits brought against him by landlords seeking rent and car dealerships in search of back payment on luxury vehicles. It’s possible that he’s at least $1,000,000 in debt to her, though the actual figure could be much higher.