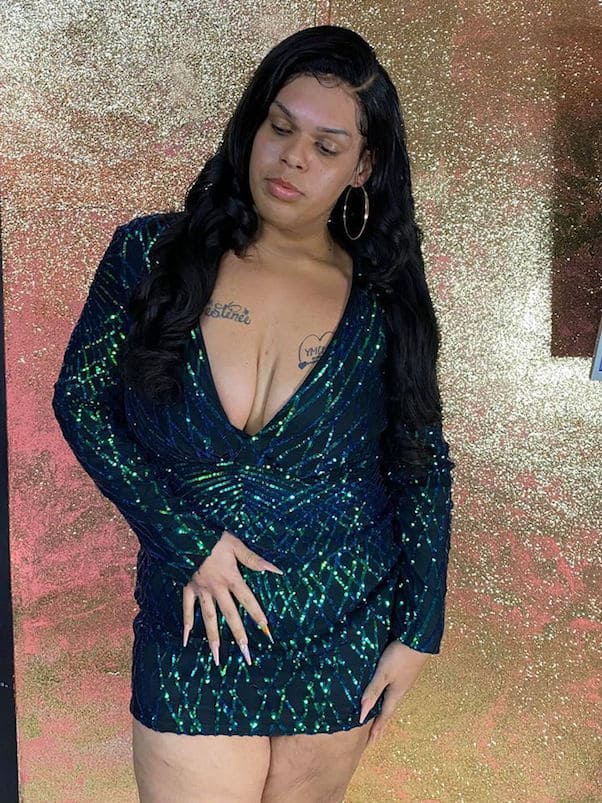 The latest Destinee Lashaee update doubles as the ninth lawsuit filed against My 600 Lb Life production company Megalomedia — and it contains some of the most disturbing allegations yet made about the producers. According to Destinee’s lawsuit (also filed under her given name, Matthew Ventress), filming for her episode was so stressful due to the producers’ demands that at one point Destinee threatened suicide. And, despite promises of mental health assistance, Destinee says she only ever got to attend one therapy session, strictly for filming purposes.

The family of deceased My 600 Lb Life cast member LB Bonner was the first to sue Megalomedia, claiming “gross negligence” and broken promises over medical payments. Since then, cast members David Bolton, Maja Radanovic, Gina Krasley, Jeanne Covey, Dottie Perkins, Nicole Lewis, and Annjeanette Whaley have also filed suit, all making nearly identical claims. (The lone exception is Gina Krasley, who did not sue regarding medical bills as she did not qualify for weight loss surgery during her debut episode.)

Destinee Lashaee update: What does the My 600 Lb Life star’s lawsuit claim?

Before we get into the details of the Destinee Lashaee update, we should point out that the 28-year-old has been one of My 600 Lb Life Season 7’s bigger success stories. Destinee began her episode at a peak weight of 669 pounds, and dealing with years of trauma. In addition to being shunned by many family members after coming out at age eighteen, Destinee was still dealing with the grief of watching her brother die in her arms.

Despite all that, Destinee made some major strides. She began the lifelong journey of working through her mental difficulties, qualified for weight loss surgery, and finished her episode at 440 pounds, having lost a total of 229. And, as we’ve pointed out in a previous Destinee Lashaee update, it looks like the Louisiana native had already lost quite a bit more weight even before scheduling a skin removal surgery late last year.

Which makes the specifics of Destinee’s lawsuit all the more troubling. According to the lawsuit, though they were already well aware of Destinee’s mental health issues, Megalomedia’s producers intentionally subjected Destinee to emotional distress in order to film more dramatic scenes. One especially fraught exchange came when producers told Destinee to shave her beard — a process that was “so painful” emotionally it didn’t even make the final cut for Destinee’s episode. And the fallout from shaving nearly drove her to suicide.

Here are the specifics, from Destinee’s lawsuit:

Plaintiff moved to Houston in the Summer of 2018 for filming. As was the case with many other participants on the show, the producers carefully scripted and managed many scenes for dramatic effect. When Plaintiff would push back, Defendants would threaten to reduce payments to her to not provide the promised gastric sleeve surgery. Defendants also pressured to shave her face, which is a source of stress and anxiety to Plaintiff. The filming of her shaving was so painful that it was not made part of the show. The stress led Plaintiff to have a breakdown in which she kicked the producers out of her home, and threatened to kill them and herself. Rather than attempt to de-escalate the situation, the producers returned to the home in hopes of getting more dramatic footage.

In addition, Destinee further charges the producers with negligence relating to her mental health. Though therapy and working through grief were major components of Destinee’s My 600 Lb Life debut, Destinee’s lawsuit alleges that she only ever got one therapy session. It seems the producers were in charge of arranging the sessions, and “only provided” the one we saw on the show itself:

Plaintiff is transgendered and believed to be the second transgendered person to appear on [My 600 Lb Life]. In April 2018, Plaintiff and Defendants agreed that Plaintiff would participate in the show. Defendants promised to pay all charges associated with medical care and treatment with Dr. Nowzaradan including any surgeries. Defendants also promised to pay for mental health treatment for Plaintiff and in fact Dr. Nowzaradan recommended this treatment on the show. Defendants knew that Plaintiff suffered from gender dysphoria and emotional distress from the loss of her brother, who had died in her arms. However, the producers only provided one therapy session, which was only done so that it could be filmed and be part of the show.

Though Destinee remains active on social media, she has yet to comment publicly on the latest Destinee Lashaee update. Her 2019 My 600 Lb Life episode remains available for streaming via TLC.